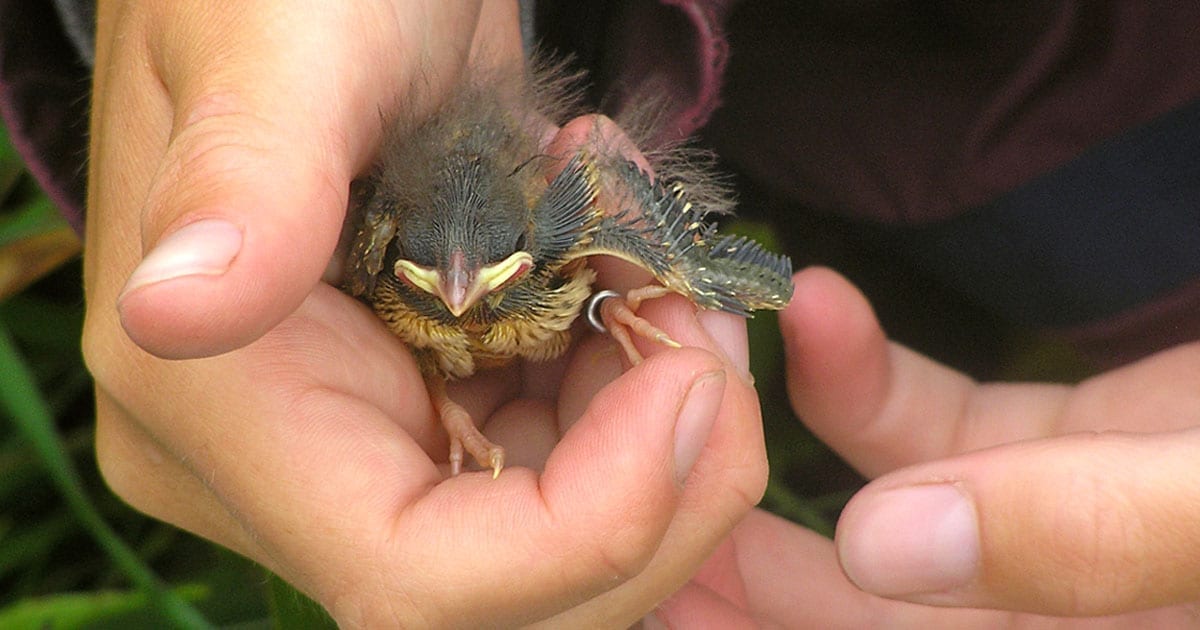 Image above: An Ipswich sparrow chick, held by Catherine Dale in July 2006, after it had been measured, weighed, and banded with a single aluminum band on its left leg. Photo Zoe Lucas

To really understand animals, you need to know them as individuals. But individual animals are often hard to tell apart. Stripes on zebras, nicks and scars on whale fins, and white markings on Sable horses can all help, but for most animals, especially small ones, differences are usually hard to recognize and remember. Such animals need to be marked somehow.

That’s one reason why we know so much more about birds than we do about most other animals. Bird legs provide a flagpole for coloured bands that can be seen from many metres away. Bird bands, used since the 1800s and refined ever since, wrap around the leg, just tight enough to stay on and not trap sand or twigs, but not tight enough to restrict movement or chafe.  Up to three such bands can fit on each leg, with no discernable harm to the birds. 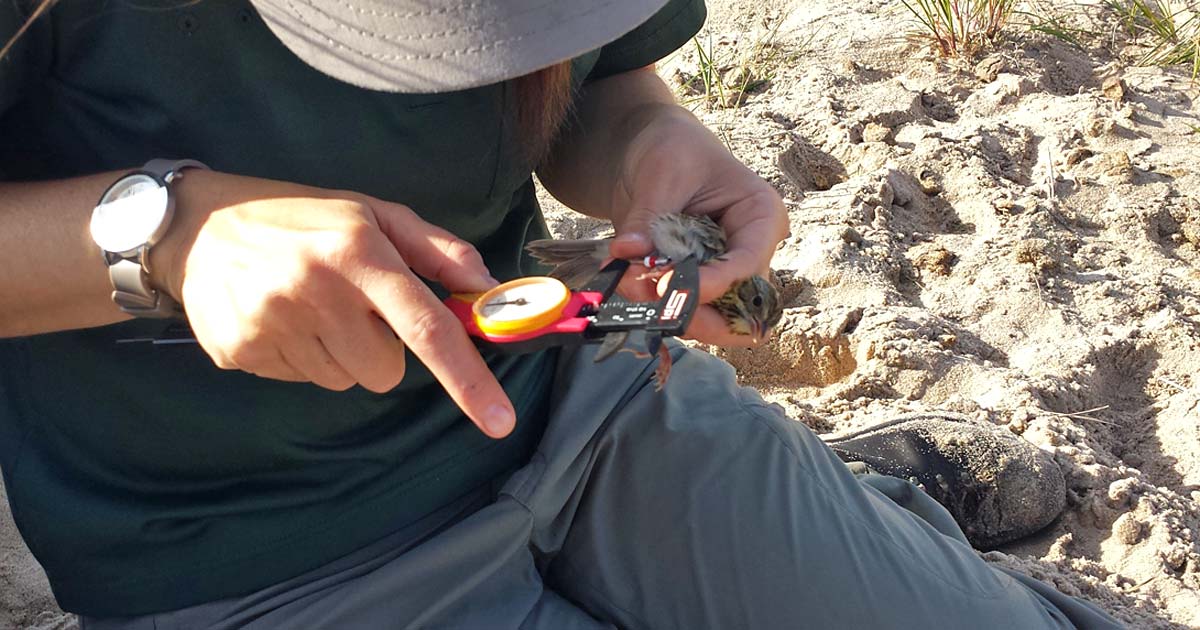 A bander measures a sparrow she just banded. All birds banded in North America, whether colour-banded or not, have to have an aluminum band (on either leg) that’s issued by the US Fish and Wildlife Service (USFWS). Together with Canada’s Bird Banding Office (BBO), USFWS keeps track of every one of the millions of birds banded every year, and tightly regulates banding through a strict training and permitting system. Millions of songbirds are banded worldwide every year, with no measurable effects on their well-being. Photo Sydney Bliss

Bands like these are the heart of the Ipswich Sparrow Project, launched in 2017. That fall, Syd Bliss and her team from Acadia University banded 257 Ipswich sparrows with coloured leg bands, and then asked birders up and down the East Coast of the U.S. (where the birds spend their winter) to report sightings of the sparrows.

But Syd’s project is only the latest in half a century of sparrow banding projects on Sable Island. In the late 1960s, Ian McLaren from Dalhousie University recognized that Sable Island was an ideal laboratory for ecologists, and Ipswich sparrows their ideal study subjects.  Surrounded by the Atlantic Ocean, sparrows that breed on the island have nowhere else to go, so they can be relocated again and again. That makes it easier to ask a host of questions about their lives: who do they mate with and why, where do their young go, how do they survive through the year?  To answer those questions, Ian and his students had to be able to tell one bird from another. 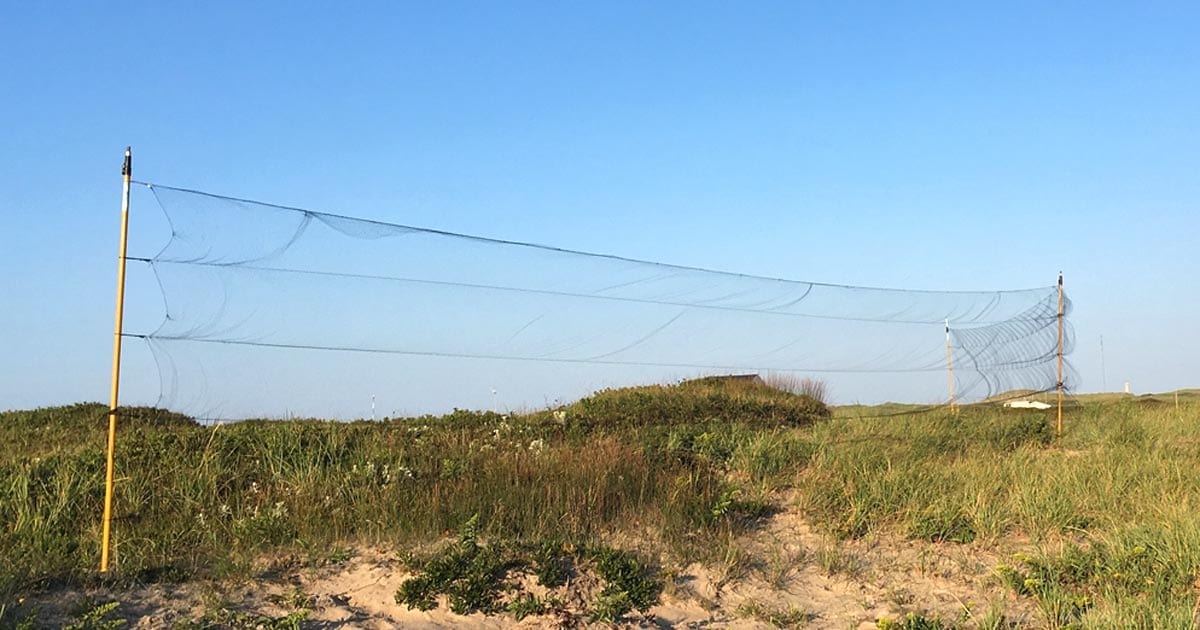 Placing bands on birds is relatively easy; the hard part is catching the birds in the first place. The most widely used method is to net them in a mist net, a length of fine netting divided into loose panels. As the bird flies into a panel, the net gives way and the bird’s weight makes the panel into a pouch that cradles the bird until the bander can retrieve it. Mist nets are easier for birds to see and avoid when they’re out in the open and blown by the wind, like on Sable. Banders there have to resort to tricks not needed at most banding stations, such as gradually walking toward birds so they’ll fly into the net, or attracting them near it using recordings of their songs as lures. Photo Domenic Cormier

Ian and his student Wayne Stobo banded about 80 adult sparrows of each sex and hundreds of young birds (caught by net or by hand before they left the nest) between 1969 and 1972. That allowed them to collect the comprehensive picture of the sparrow’s breeding, migration, and population regulation that is summarized in their classic monograph on the bird. Another student of Ian’s, Howard Ross, banded again from 1976 to 1979, including over 1000 nestlings, to understand how parentage and habitat might explain which young survive to breed again and which don’t (most didn’t; only 2-4% survived the harsh winters of those years).

Since the McLaren years, banding on Sable has been spotty, and focussed on particular questions: Mary Reid in the early 1980s on how male sparrows attract a mate; Merilee Temple in the mid-1990s on whether those mates are actually faithful (spoiler alert: they’re not); and Catherine Dale in 2006-2007 on how moulting feathers show where males and females spent the winter. 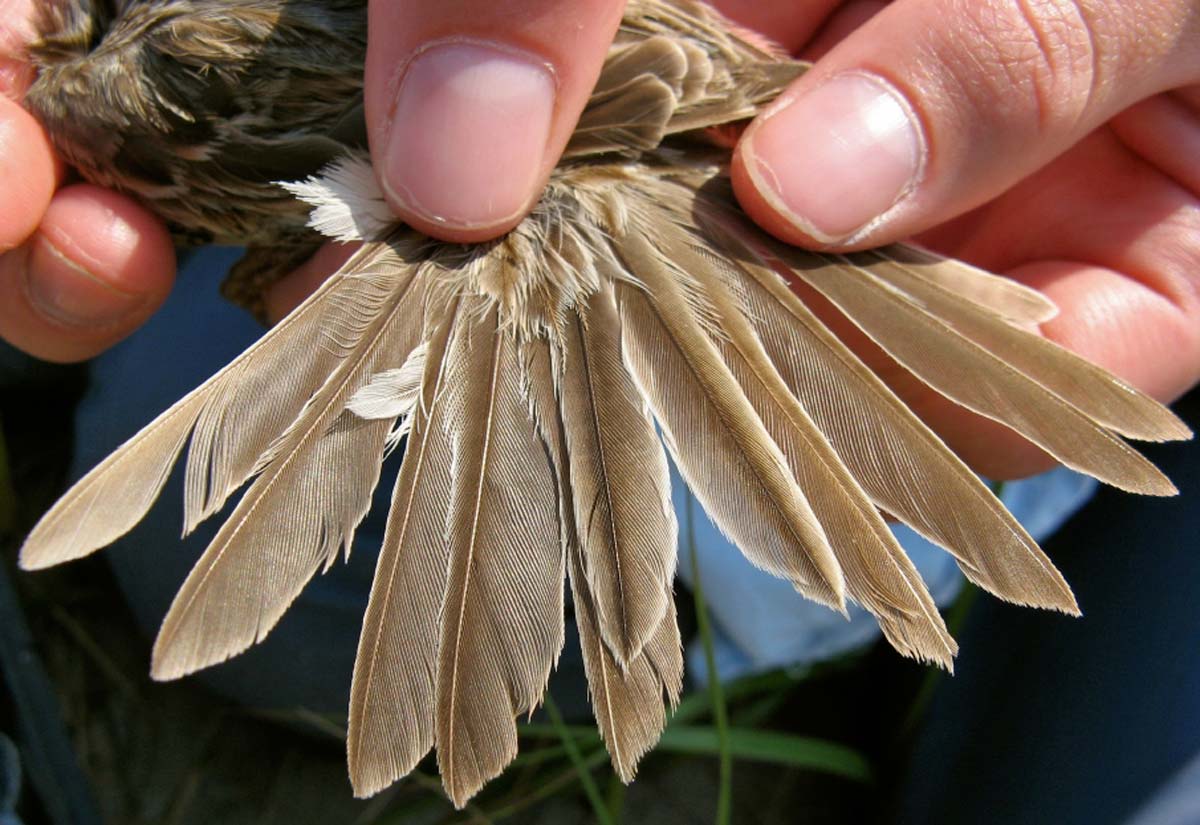 Birds drop (moult) and regrow worn feathers. The chemical composition of the feathers comes from the food they eat while growing them, and so can be used to estimate where the birds where then. This Ipswich sparrow’s feathers, grown during the winter, carries the chemical signature of where the bird spent the winter, thanks to isotopes (atoms of different weights) that are commoner at some latitudes and rarer at others. Photo Catherine Dale

Marty Leonard and Andy Horn led an intensive banding program in the early 2000’s intended to look at how the birds dispersed across the island, especially whether they avoided settling near close relatives, which would risk harmful inbreeding. Support for the follow-up re-sighting project fell through, but geneticists Steve Mockford and Jonathan Wright made good use of the blood samples that were originally collected to identify close relatives (through a sort of DNA fingerprinting). The blood showed that Ipswich sparrows, though genetically distinct from Savannah Sparrows on the Nova Scotia mainland, were similar enough to Savannah Sparrows elsewhere that they couldn’t be considered to be a separate species – an example of how banding studies can lead to findings that weren’t sought in the first place.

Since then, technology has raced forward. Now, birds can be tracked by tiny radio tags stuck to miniature backpacks that are light and elastic enough not to harm the bird. When a bird flies by a receiving tower, it pings an individually distinct signal that’s recorded at the tower. In this way, Zoe Crysler traced how Ipswich sparrows migrate south in fall, and now Syd Bliss is continuing the work, with colleagues from Virginia and New Jersey, where birds can be tagged on the wintering grounds, so that they can be tracked on their northward journey in spring.