Image above: A roll cloud observed at the east end of Sable Island on June 13, 2003. The two small dark spots in the field are horses grazing beach grass and wild pea.

A roll cloud is a rare meteorological phenomenon. The roll clouds seen at Sable Island are Stratocumulus volutus (the Latin “volutus” means “revolve”). This cloud form is described in the WMO’s International Cloud Atlas as: “A long, horizontal, detached, tube-shaped cloud mass, often appearing to roll slowly about a horizontal axis. They usually occur singularly but are occasionally observed in successive lines of clouds.” https://cloudatlas.wmo.int/home.html

This form is best known from the Gulf of Carpentaria, in northern Australia, where these clouds−called Morning Glories−are seen most often during spring, usually near dawn.

Roll clouds have been observed by personnel with the Meteorological Service of Canada (MSC) and/or by ZL on at least six occasions, the earliest being in 1976, and the most recent in July 2019. Some visitors and Parks Canada personnel were on the island and saw the cloud in July. Since, thus far, the most notable roll cloud events observed at Sable Island have occurred after 4:00 pm, perhaps they could be called “Early Evening Glories”

In the summer of 1976, MSC station staff observed a series of seven roll clouds, moving in from the north, and oriented west-east (i.e., lines of cloud roughly parallel to the long axis of the island). The first cloud passed over the Sable Island Station at about 6:00 pm, and the last passed just after 8:15 pm.

Thus far, this is the best documented of the island’s roll clouds. On June 13, 2003, a roll cloud appeared in the clear, blue sky over the ocean east of Sable Island. At about 4:00 pm, the cloud, oriented roughly northwest-southeast and rapidly advancing, was located near the east tip of the island. The cloud travelled along the island at a speed of roughly 30 km/hr. Its position relative to the island was indicated by the long shadow cast on the ocean and across the landscape, between the north and south beaches.

The three composite photos above show the cloud as it traveled southwestward over Sable Island. The photos were taken, looking toward the east tip, from a high dune on the eastern end of the island. The greater depth of the middle section of the cloud, and the illusion of curvature, are artifacts of multiple photos taken from a single position.

At the Sable Island Station, the barograph measured a sharp rise in pressure, and the wind recorder showed a temporary shift in wind direction (left, blue arrow) as the roll cloud passed overhead. In the wake of the cloud, there was a 5% increase in humidity and slight change in the wind. The laser ceilometer at the station measured the base of the cloud at 150 meters. A NOAA satellite image (right) of the Scotian Shelf region shows the roll cloud (appearing as a thin white line, indicated by the yellow arrow) after it had passed over Sable Island.

View of the front (updraft) of the roll cloud, looking towards the northeast, before it passed overhead.

View of the back (downdraft) of the roll cloud, looking towards the northwest, after it passed overhead. The front of the cloud appeared very smooth, the back was somewhat turbulent.

For more about the splendid Stratocumulus volutus,
Sable Island’s Roll Cloud of June 2003

The three photos above, taken towards the southeast, show the roll cloud moving northwestwards across Sable Island.

Looking towards the west (from the same position as above) as the roll cloud passed overhead, four minutes after it was first sighted (first photo above).

During a gloomy, grey morning, two roll clouds were observed from a position on the south side of West Spit—and the Thebaud platform was in the scene. The platform is located 10 km southwest of the island, in a water depth of 27 m.  At 11:00 am, the temperature was 6.2ºC, and the wind southerly at 12 knots. The roll cloud appeared to be moving towards the northwest.

The Thebaud platform as seen (through a telephoto lens) from West Spit. The first of the two roll clouds appears as a dark line beyond, and roughly south of, the platform. The advancing roll cloud is preceded by a line of thin, broken cloud.

Fifteen minutes later, the roll cloud has advanced and obscures the upper part of the platform.

A wide view of the scene above. The partly obscured platform is near the right edge of the photo, and the second roll cloud is visible in the distance as a long, thin stripe of dark grey just above the horizon.

The two roll clouds. The first cloud is not quite as tidy and well developed as the clouds seen in June 2003 and May 2011.

From the south side of West Spit, looking eastwards roughly towards the centre of Sable Island—the two roll clouds extend across the island. From this direction the clouds do not show up well against the overcast sky.

Twenty-five minutes after sighting the first roll cloud beyond the Thebaud platform, the cloud passes (left to right) over the heads of the observer and a few hundred Grey Seals hauled out on the beach. The platform is visible as a faint grey mark on the horizon.

On July 9th a dark shadow fell over the Sable Island Station. It was 6:50 pm, and a roll cloud had suddenly blocked the early evening sunlight. But the chilly darkness was brief as the dramatic cloud moved swiftly southwards and away over the ocean. 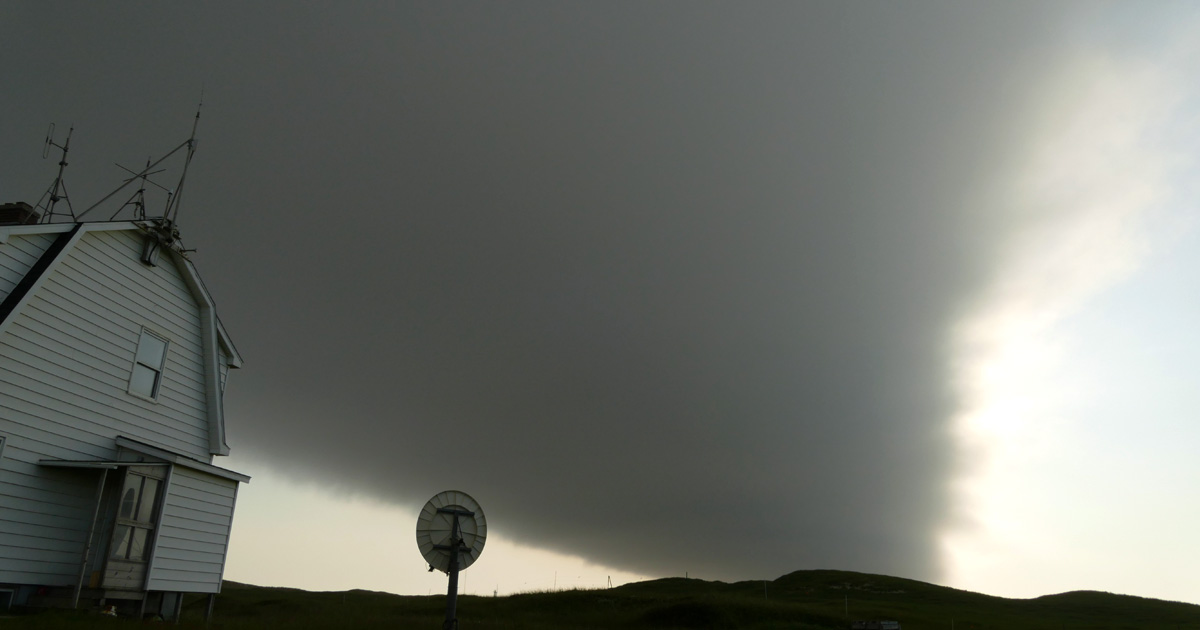 Five minutes later the cloud had passed over the island. By the time the next three photos were taken, the cloud was likely south of the island and moving out over the ocean.

A view to the southeast from the Sable Island Station. The roll cloud, rapidly moving southwards, appeared to be roughly parallel to the long axis of the island.

A view to the south from the Sable Island Station. About five minutes after briefly blocking out the sunshine, the cloud was well past the operations building of the Meteorological Service of Canada (MSC). Hourly wind observations before and after the roll cloud passed were westerly 10 knots and and westerly 6 knots, respectively. But at 7:00 pm the wind was northerly 12 knots, a wind shift likely associated with the cloud.

A view to the southwest. The pattern made by turbulence on the trailing edge (downdraft) of this cloud is very similar to that seen on the 2003 roll cloud.

The roll cloud, Stratocumulus volutus, is not attached to other clouds. It is a solitary wave called a soliton, a wave that has a single crest and moves without changing speed or shape.

A roll cloud is formed by a solitary wave in the lower atmosphere. It is thought that solitary waves develop in the presence of a temperature inversion and are generated by disturbances such as thunderstorm activity or the collision of opposing ocean breeze fronts. A temperature inversion is a situation in which there is a cold layer of air close to the ground, with a warmer layer on top, creating a “lid” over the cooler surface air. This layer of surface air is highly stable and enables the solitary wave to propagate without being damped, and to travel long distances. Thus, the layer acts as a “wave guide”.

Solitary waves occur over both water and land. For example, they commonly form in the arid interior of the Australian continent. Waves in dry areas normally occur without a cloud: they are low-level clear-air disturbances (a horizontal vortex) accompanied by a sudden wind squall at the surface and a temporary increase in surface pressure. However, when sufficient moisture is available at the surface—as it would be over the ocean—a solitary wave creates a long, continuously forming roll cloud. The cloud develops in the updraft along the leading edge of the wave as moist air from near the surface is lifted to the condensation level. Then, as the air descends in the downdraft along the trailing edge of the wave, the cloud evaporates. The visible upward motion of the cloud elements at the front and the downward motion of cloud at the back create an impression of a cloud rolling backwards as it advances.

Collection of weather data on Sable Island began in 1871 with the establishment of the Meteorological Service of Canada. This program has been one of the longest continuous collections of climatological observations in the Maritimes. In addition to supporting research on greenhouse gases and air quality, the MSC operation on the island has recorded some rare and unusual atmospheric events (including roll clouds) that otherwise would have gone unreported.