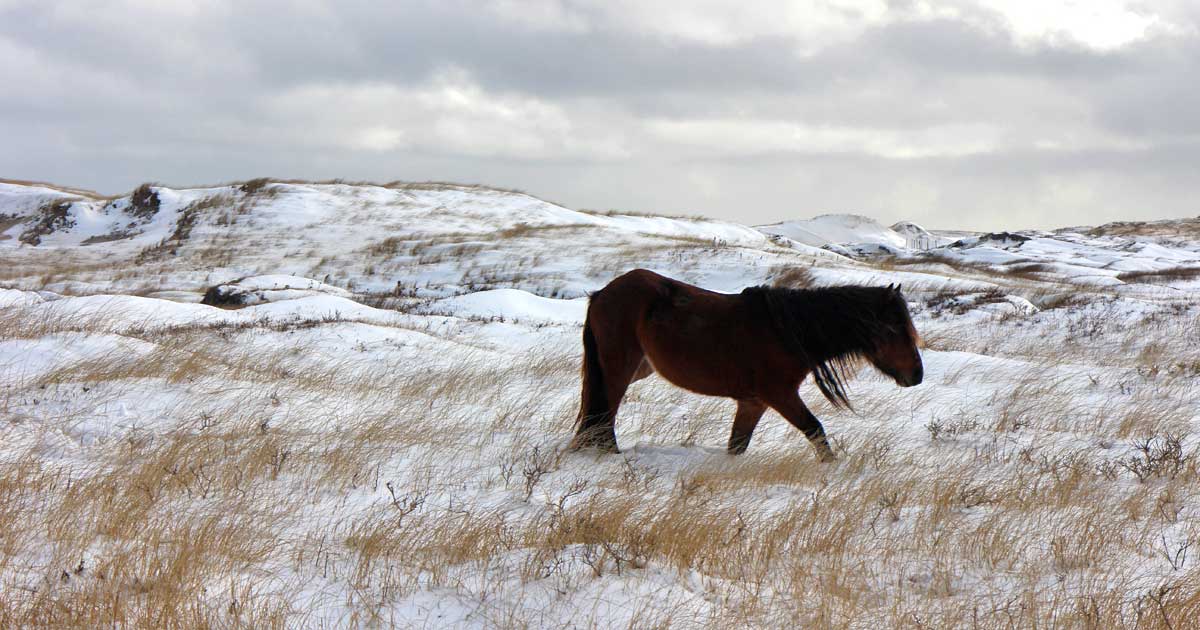 Image above: A Sable Island horse and a fresh layer of snow, December 30th, 2015.

A winter on Sable Island. I had the honor of working on Sable Island with the Meteorological Service of Canada (MSC) as a Meteorology Technician for 3.5 months, from November 2015 to February 2016. I was sad to hear the program recently ended and I feel fortunate that I could be a very small part of that history.

The Sable adventure starts before you even leave the mainland. I would find that getting on and off the island was no easy feat. The foggy or stormy weather and difficult runway conditions (i.e., the landing area on the beach being too wet or too dry and/or too rough) means Mother Nature holds all the cards. Once on the small aircraft, the Islander, a seven-seater, you’re in for a bumpy ride and for your first view of the island.

The west end of Sable Island, a view from the Islander fixed-wing aircraft as it approaches the landing strip on the beach.

A view from the south side of the island, showing the Sable Island Station.

For my time on the island the only way to explore was my two feet and with a sense of adventure. I walked… a lot. Even though it was winter, the snow would come and go, but the one thing that was always constant was the wind. You wouldn’t think sand moving over sand would be that noisy. I walked the same beaches, but every time was different, with the moving sand creating a new backdrop. I came across many pieces of history such as the old lighthouse known as West Light and a derelict helicopter pad. I spent many of my free hours looking for shipwrecks, the perfect horse photo, dipping my feet in the ocean and watching the waves roll in. 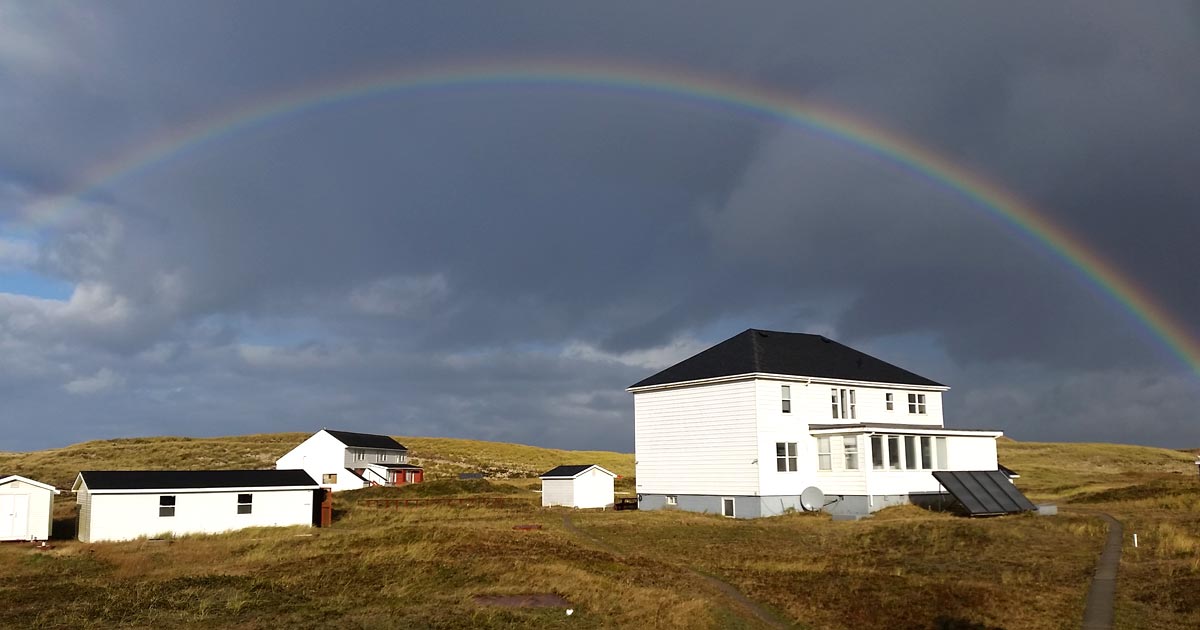 An afternoon rainbow reaching over the Sable Island Station. The building in the background – the triplex which served as accommodations for MSC personnel – was my home for my three months on the island.

When I arrived on the island the human population was four, two MSC (including me) and two Parks Canada employees. Having already worked in isolated postings in the high arctic – Canadian Forces Station Alert and the Eureka Weather Station – I was ready. But I would find pretty quickly that I was so not ready. We all had our own jobs to perform and sometimes, especially during the weekends, it would feel like the only human interaction could be waving at someone in the distance. But the human condition of wanting to connect prevails. The MSC dinners which started with Gina’s delicious desserts, the coffee break Sundays at the weather office, Christmas dinner, phone calls home, letters from friends, and listening to the marine VHF radio, all became ways to feel connected.

Looking back, it’s funny the small things that make you feel closer to home. I remember sending my family the link to the southwest view on Nav Canada’s weather cameras. I would wave to that camera all the time as I walked those wooden paths. If memory serves me correctly, my parents saw me in the scene once!

Four human sightings turned to five with the addition of naturalist Zoe Lucas. Through more dinners and tours of her lab I learned so much about the island. She answered my endless questions of all things Sable Island and I was thoroughly fascinated with her history and knowledge. In January, the population boomed to seven with two more Parks Canada employees arriving. With them came board game nights, group hikes, and a fun Super Bowl party.

My absolute favourite photo taken on the island.

Winter can be a challenging time for the horses. Looking through my hundreds of photos I see them constantly head down and munching on yellowed dead grass. I never got used to seeing them and I can still recall the awe I would feel. There were a few local horses (horses which tended to graze near the station) that I would see most days and the occasional herd that would wander into the area and stay for a bit. They were not bothered by us at all, although I did get the occasional horse stare as if to ask me what on earth I was doing.

One day in January, I had a surreal moment with a herd of fourteen plus horses. They were grazing around a pond of water near the station. I decided to sit down and just watch them, and before I knew it, they were grazing quite close to me. I had to get up and move back a number of times to maintain the 20 m distance. They saw me and accepted me as not a threat. I sat there for a long time watching them. It started to snow and still I sat there. It was a quiet moment that I will remember forever.

Sable Island horses in their winter coats. The younger the horse, the thicker the coat.

Three Sable Island males challenging each other with some pushing and shoving and pawing the ground.

Horses resting, grazing and socializing in the fields west of the Sable Island Station.

A male Downy Woodpecker searching for food on an old wooden post at the Sable Island Station.

Besides the horses, the island has a unique and sheltered ecosystem. One day we had a small woodpecker show up. He must have been blown off course. The poor little guy was very confused by our lack of trees, but he camped out on our biggest wooden lamppost. I choose to believe that he bided his time and made a break for mainland when the wind was right.

Grey Seal bones scattered in the sand. Life is beautiful but the reality is that the island is unforgiving. I saw more death during those months than I care to remember, but it made the happy moments that much sweeter.

A Grey Seal hauled out on the north beach.

As time passed, there were slowly more seals arriving and by mid December there were thousands. DFO (Department of Fisheries and Oceans) scientists arrived to continue ongoing research, though I only saw them from a distance (hence not including them in my head count). If you didn’t know, Sable Island is home to the world’s largest breeding colony of Grey Seals. During the breeding season, the seals basically invaded the island and it became a living, breathing, stinking nature documentary with live dialogue rattling around in my head.

A Grey Seal mother and young pup, with an adult male nearby.

There were seal mothers and babies everywhere including a mother-baby pair right behind my house. I carried a flashlight at night because I didn’t want to surprise one of the enormous males. Once the mothers left for the sea, the real fun began. Grouchy, recently weaned, confused, aggressive, angry babies everywhere! They are surprisingly fast for their size with a jaw full of sharp teeth. 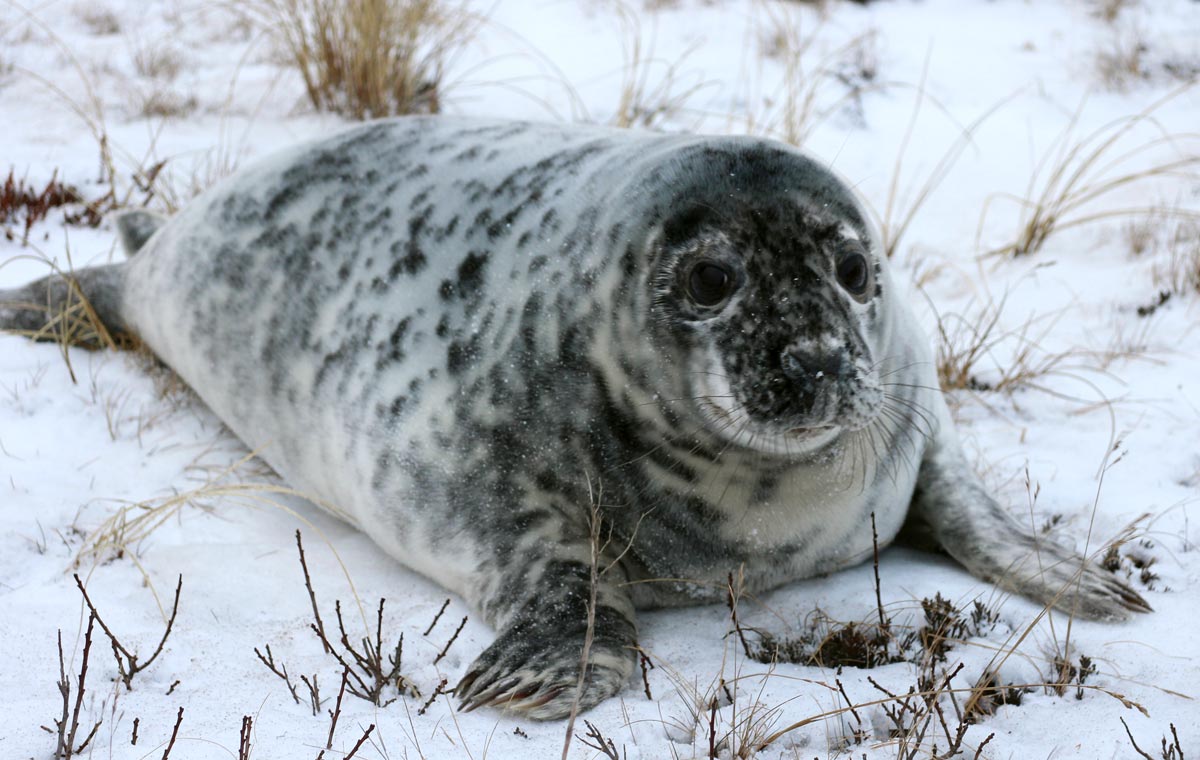 A weaned Grey Seal pup that has shed its white natal fur.

I had one weaned seal pup living under my stairs which I named Harry Potter. Harry would lunge at me every time I’d jump off the deck.

The last thing that I want to share are the storms. The weather out there can be so extreme, with high winds making releasing the weather balloons thrilling and terrifying. Check out the post MSC’s Aerological Program Ends After 75 Years of Service for a couple of actions shots of me doing a snowy balloon release. I love storms. I love the raw energy you can feel crackling in the air. I love the quiet as it passes over, and I love that they make me feel out of control. From storms come beautiful skies. I have so many photos of those powerful skies.

The most memorable storm was in mid-January. I woke up in the middle of the night to the house shaking, wind gusts slamming into the house rattling the windows, sand scratching the window and making its way inside. Then it started, a sound I will never forget. A squealing, screeching noise of something dying. I sat awake in bed staring out the window searching the pitch darkness. I was too afraid to go outside and must have eventually fallen back asleep. When I woke the next morning, the storm had passed. It turned out something did die that night, the solar thermal panels (which use sunlight to produce hot water) right outside the house had peeled off their frame, leaving debris and broken glass everywhere.

The solar thermal panels before the storm.

The metal support structure for the panels was all that was left after the storm and clean-up of debris.

A Sable Island sunrise. To the right, the station’s windsock and the distant wind turbines are visible.

Sunrise, with the five wind turbines in the distance.

Sunset, a view towards the southwest from the deck of the triplex.

A winter evening at the Sable Island Station.

… and a silvery winter sea.

When I finally made it off the island in mid-February it was a harrowing flight avoiding snow squalls and it couldn’t have been a more fitting way to say Good Bye to Sable Island.