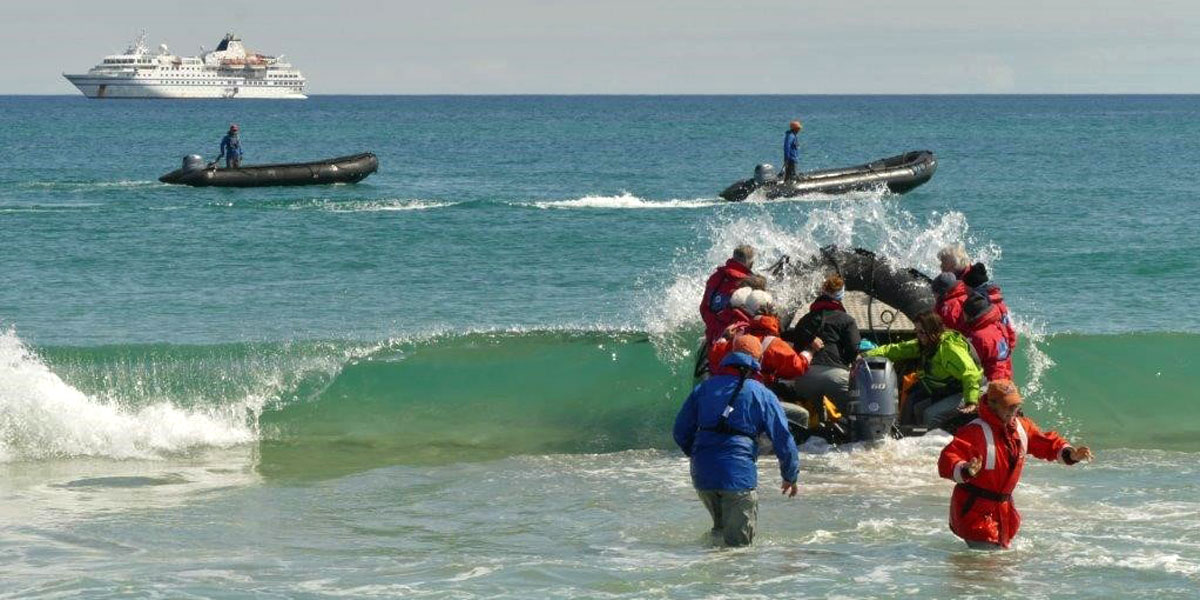 10 Jan A Trip to Sable Island Aboard the RCGS Resolute – John Merrick, 2019

Image above: Following their visit to Sable Island, passengers are taken back to the One Oceans vessel, RCGS Resolute, anchored off the south side of the island.

It was too good an opportunity to pass up!

One Ocean Tours was advertising an adventure excursion around the Gulf of St Lawrence, but the highlight for us was the opportunity for a shore trip to Sable Island. A spur of the moment decision was made to take advantage of this local opportunity to fulfill an important bucket list desire. We immediately made a booking.

The ship was the RCGS Resolute which carried 146 passengers. The Royal Canadian Geographic Society is a sponsor of One Ocean Expeditions and the ship bears their name. Accommodations were very comfortable, dining and lounge areas were well patronized, the staff and crew were very professional, and full wet weather and protective gear was provided.

My wife’s bucket list had long included one notable priority; a visit to Sable Island. As a meteorologist, now retired, my position had included a management role for the weather operations on the Island and I had been there a couple of times. Years earlier my wife had been wait-listed on a scheduled supply flight to the Island but much to her dismay she was bumped at the last moment.

Day after day before the departure I scanned the forecast products available for the area. Ten days before we sailed those forecasts were for generally calm, agreeable weather. But as the departure day approached, concern was rising about winds and related shoreline wave action affecting the Island during our scheduled visit.

But 11 July 2019 did turn out to be a very lucky red-letter day for the touring adventurers.

Heavy ocean swell conditions on North Beach, the preferred landing area, ruled out any attempt on that shore. Our hopes and those of 130 other passengers were in danger of being shattered. But to the credit of the ship’s operators, we made a lengthy and time-consuming detour north then eastward around the island. The ship with a 5-meter draft was required to steam well clear of the Island in order to avoid the treacherous shallow sandy depths of the Sable Bank. Finally, after a four-hour transit we approached the Island’s southwest facing coast where we anchored about a kilometer offshore.

There are no piers or jetties anywhere on the Island, visitors either fly in or go ashore by boat; in our case by zodiac. The South Beach landing zone was awash with breakers which required considerable skill on the part of the ship’s zodiac crews to manage, and in all about 100 passengers were transferred safe and dry to the Island. Sable Island was the first stop on the cruise and zodiac travel was a new exuberating experience for many travellers including us, as was being carried swiftly on the crest of a meter-high wave while it propelled us toward the beach.

As we approached and landed, we could see small black shapes on shore well to the west which Zoe told us later were probably Grey Seals. Other than that single sighting, there were no other seals close to us.

The shipborne detour to the south side of the Island unfortunately reduced the length of time available to visit the Island. Once ashore, passengers were divided into small groups. Parks Canada staff took the groups along the beach and into the dunes. 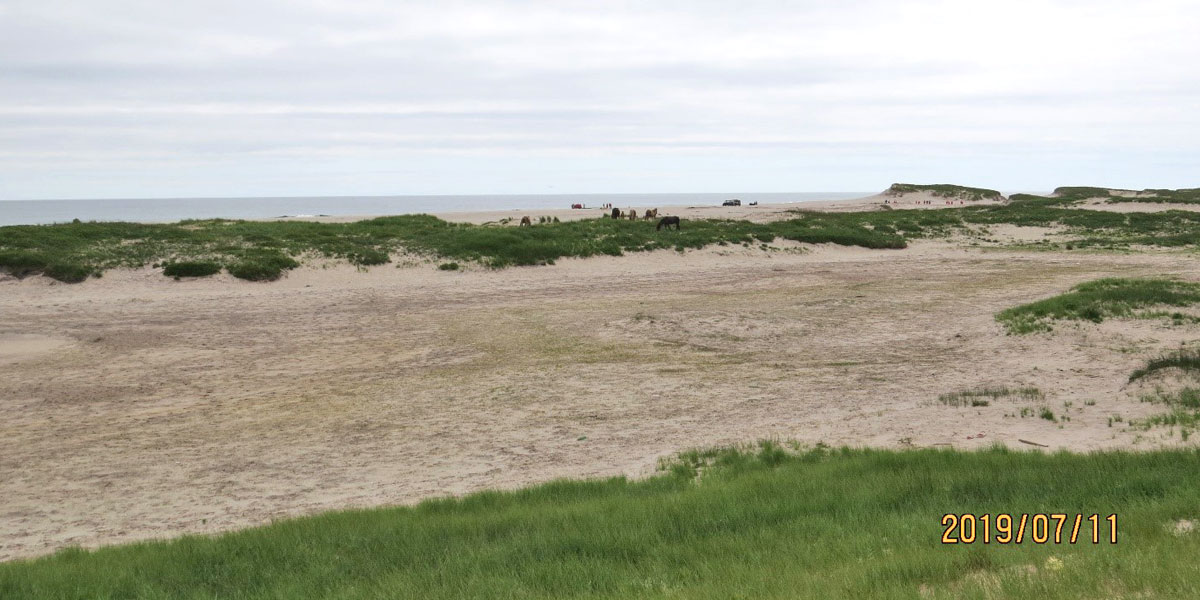 Wind sculpted dunes. A view across a sandy washover area towards the south beach where passengers were brought ashore.

By prior arrangement my wife and I were met onshore by our friend Zoe Lucas, who by good luck happened to be there working on some beach survey projects. With the approval of the Parks manager, Zoe took us separately on a short hike. 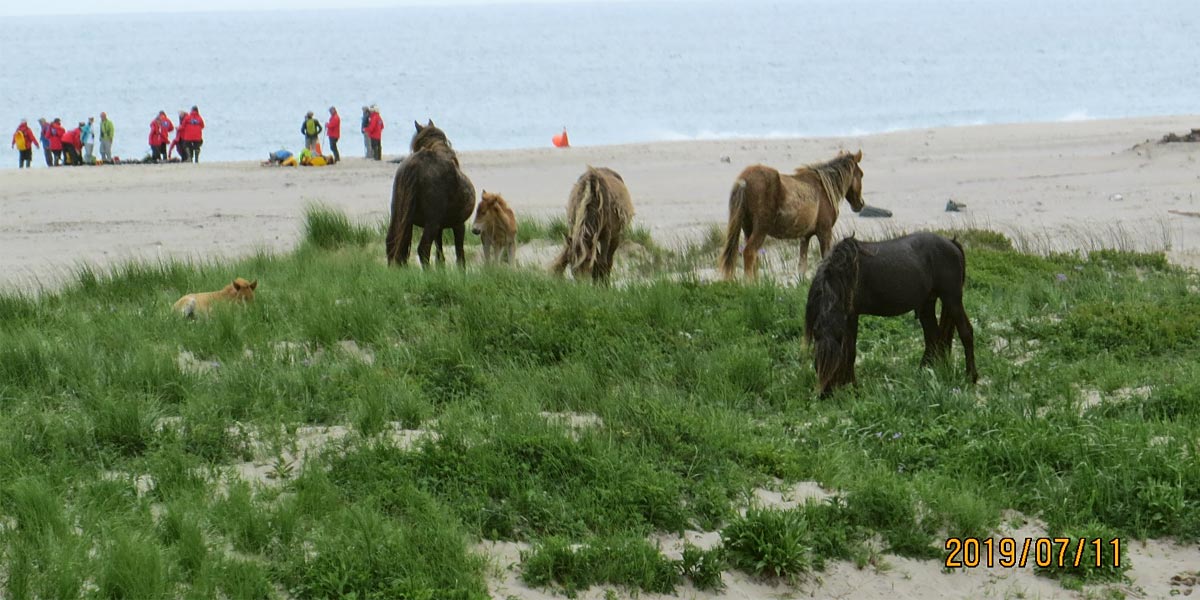 A family of horses with their young offspring watched us but paid little attention. Needless to say, we did nothing to attract or hinder them. We found out later that the tour photographer had set up a camera tripod in the dunes and the strange looking vertical assembly attracted the horses. The photographer had little choice but to back away and watch as one horse toppled the unstable tripod, then walked away.

Perhaps the horse was attracted to the tripod as an object to rub against, to scratch off loose hair. Only one short stubby pine tree exists on the Island, a survivor of long-ago tree planting attempts to slow down dune migration and erosion.

The weather was cloudy, in the low twenties and a good breeze followed us. As we trudged awkwardly away from the beach into the dune region, Zoe described some of factors affecting the horses and their survival as well as the mechanics of the dunes’ wanderings and their impact on the wildlife.

She pointed out a variety of non-equine Sable life, such as varieties of beetles, the different species of grasses and shrubby vegetation and one or two bits of debris obviously left over from earlier human activity. 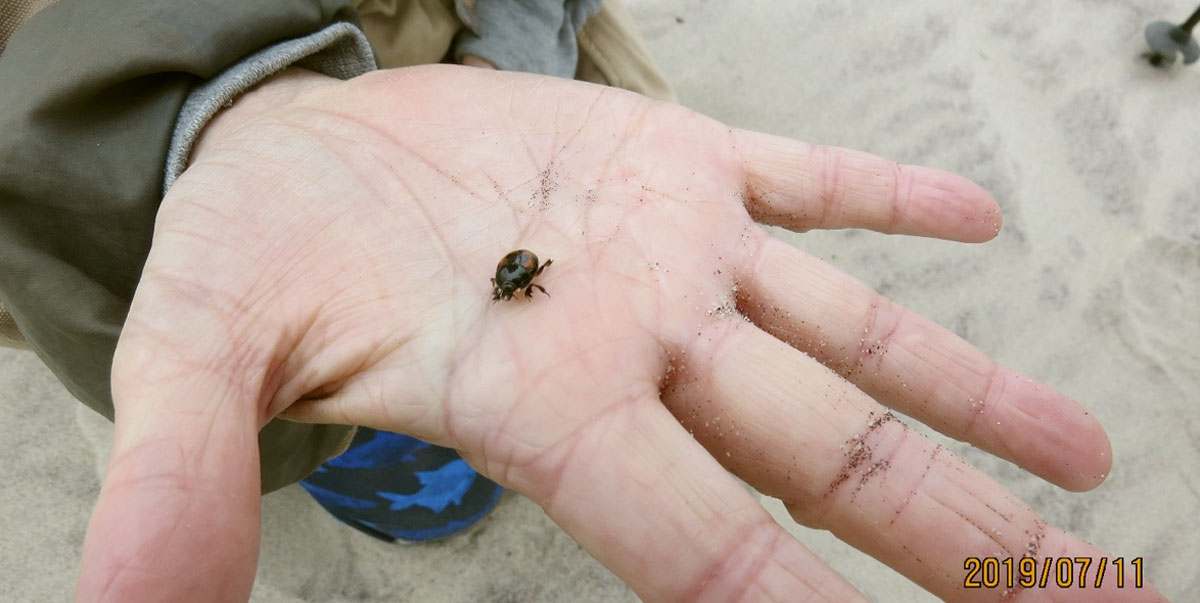 One of several different beetles and bugs we saw.

Zoe spoke about the bird activity and varieties that nested and visited the Island, mentioning the Ipswich Sparrow and others. I commented on the unexpected and attractive artistic appearance of the patterns in the sand. Zoe told us that the winds separated and sorted by weight the different grains of magnetite, garnet, tourmaline and zircon resulting in the intricate and random patterns. 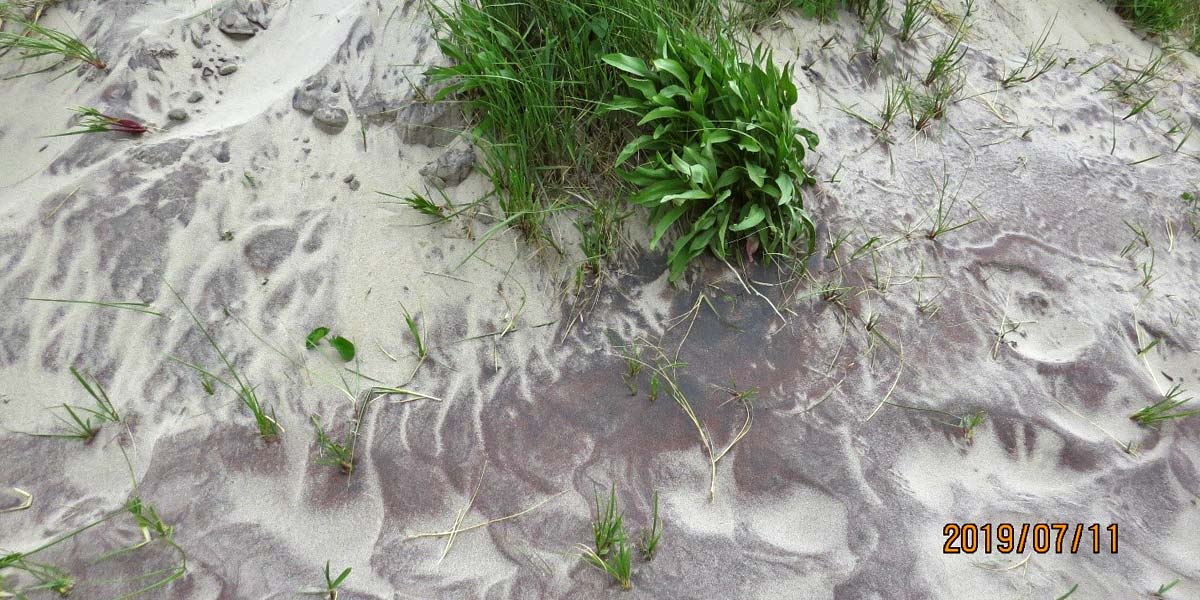 Beach grass and seaside goldenrod on a sandy slope. 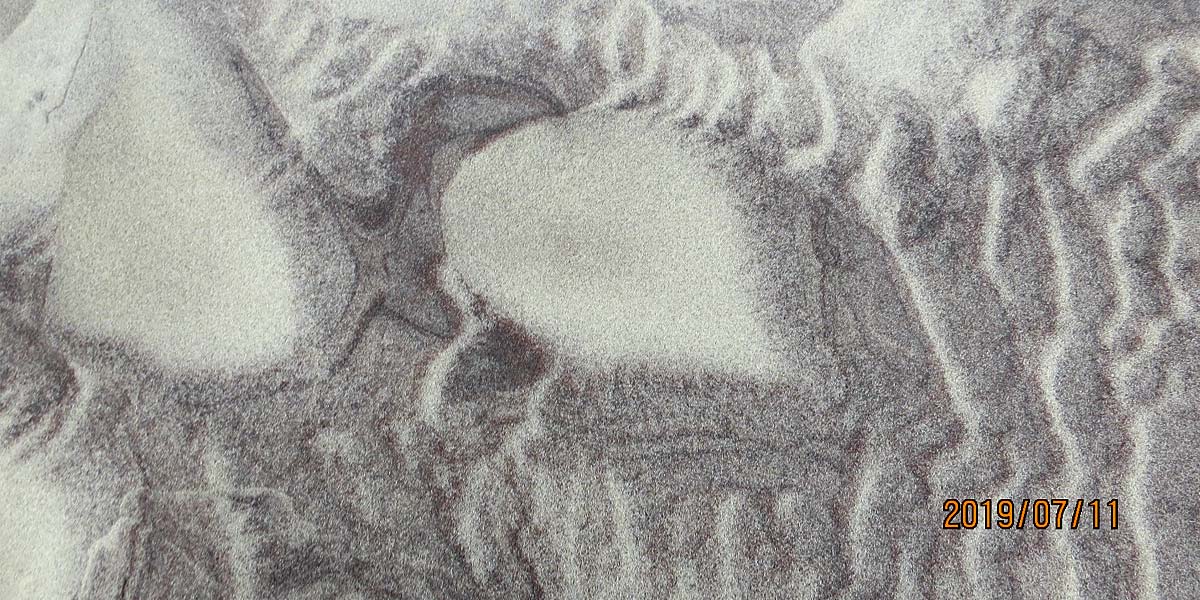 Varieties of heavy mineral sand grains sorted and arranged by the winds.

Departure from the island was also interesting. The experienced zodiac crews loaded boats in the shallows and waited until a crested wave was on the point of receding. At precisely the proper moment our boat was shoved onto the deteriorating crest and we slid downward on the ocean side where the outboard motor took over and safely propelled us back to the ship.

It was a thrilling day for both my wife and I, and we thanked Zoe for providing such quality time for us.