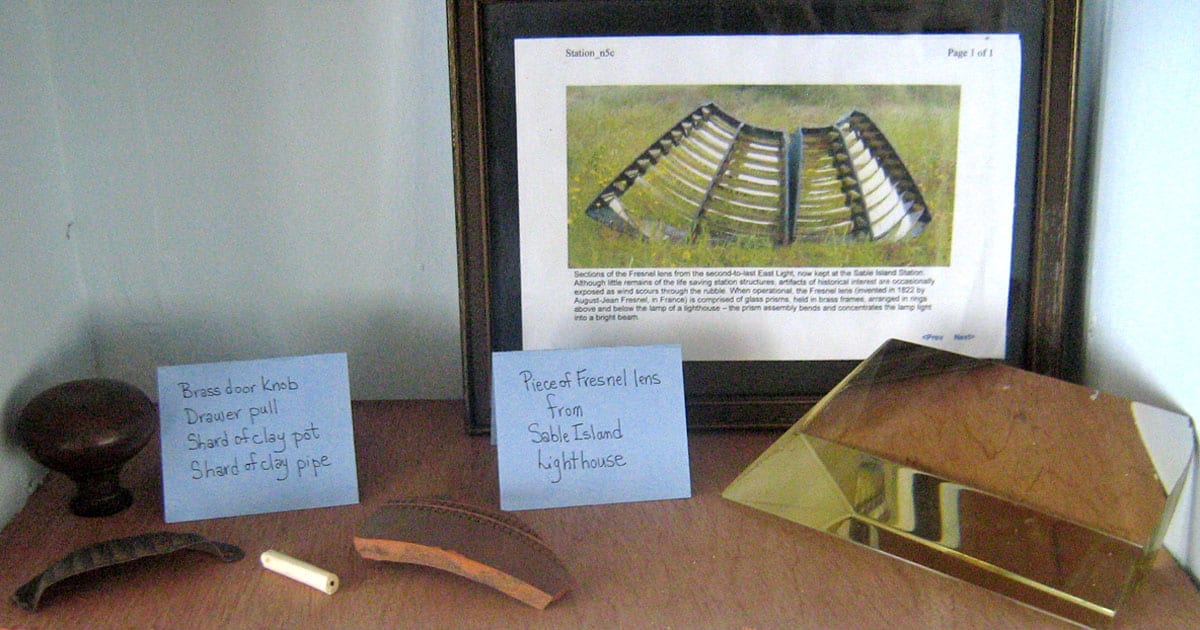 18 Aug The Sunroom Museum – A Glimpse of Sable Island

Above: A few artifacts from Sable Island. The piece of glass on the right is a prism from a Fresnel lens. When operational the Fresnel lens is comprised of prisms held in brass frames (a section shown in the photo behind) and arranged in rings above and below the lamp of a lighthouse—the prism assembly bends and concentrates the lamp light into a bright beam.

In 2008, Sandra Barry and I flew to Sable Island to spend an afternoon with Zoe Lucas, Sable’s “resident naturalist.” When Sandra returned to the mainland, she took back a moon snail shell Zoe wanted her to give to her father, Herb Barry. Herb had been fascinated by Sable Island throughout his life.

That moon snail shell was the first item in what has become the “Sunroom Museum”—named by a group of visiting Brownies—a delightful collection of items from Sable Island, beautifully curated, in Herb’s Middleton, Nova Scotia, home. Almost a decade after that moon snail shell arrived in Middleton, I had the occasion to visit Herb’s museum.

There are artifacts, such as a piece of Fresnel lens from a long-ago decommissioned Sable Island East Light, and a small rusty horseshoe. There are natural wonders, such as the swordfish bill framed and centred on the floor-to-ceiling wall-wide display; the beautiful sand-smoothed horse skull; the collection of tiny “pots” made by a miniscule species of wasp; the lacey, delicate bones from horses’ nares; even a few balls of very dry horse dung collected in a clear-lidded specimen box. The box itself is a Sable Island artifact. It had been used by a researcher from Japan who was collecting samples on Sable Island during a study of the island’s horses in 1994. 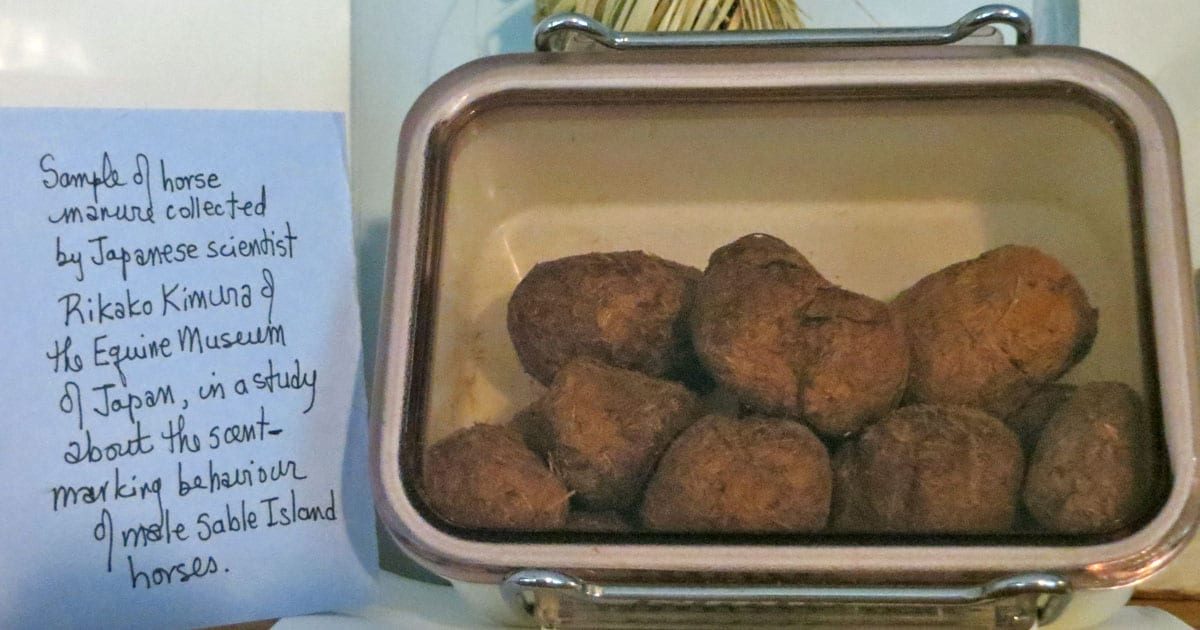 Most of the items in the Sunroom Museum were provided by Zoe. Having worked on the island since the mid-1970s, she was able to contribute many interesting bits and pieces that had been in dusty boxes for ages. Herb explained that new rules apply to Sable Island items now that it’s a National Park Reserve, and it is not possible to collect bones, shells and sand these days. So it is a deep pleasure to him, who will, at 87, never be able to go to Sable Island himself, to put his finger in a small pill-sized container of sand and remark, “Feel this—it’s finer than salt!” He has his small sum of pale Sable Island sand, but also a little dark sand composed of heavy minerals such as magnetite, tourmaline, zircon, and garnet, and trace gold (one part per million).

Herb grew up on Nova Scotia’s South Shore, on a farm in Maitland. Often he walked to Mahone Bay or to Bridgewater, 10 or so kilometers in either direction. He worked for 70 years, he told me: “If we didn’t work, we didn’t eat.” When he was 13, he worked at the Boscowan Inn in Lunenburg, washing dishes and running errands. His least favourite errand was to go to the wharves every Friday to fetch a halibut as big as he was. He smelled like fish all day, he told me, wrinkling his nose. Sandra showed me a photo of Herb at 13, with two of the people he worked with. He was as tall then as he is today—about six feet. 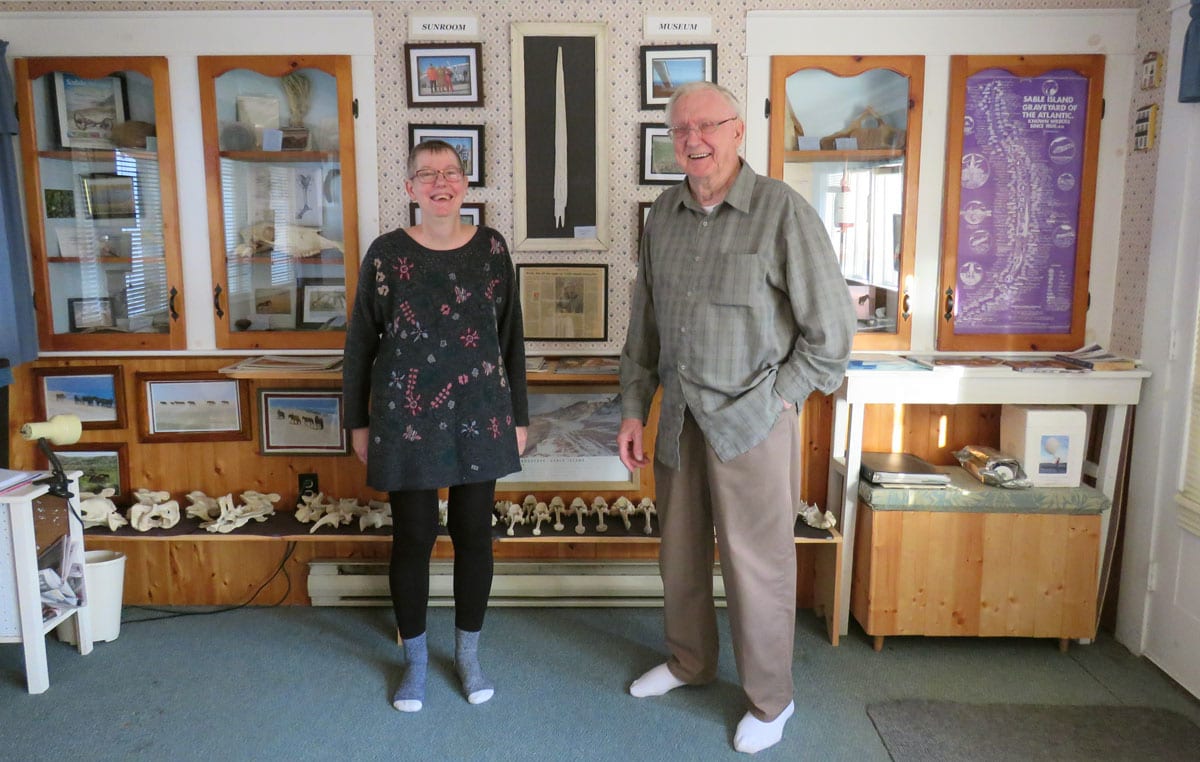 As you can see in the photograph of Herb with his daughter Sandra, Herb has great warmth and charm—a welcoming and generous spirit. Nothing pleases him more than to ask visitors to sign his guest book. Many people in Nova Scotia have small collections of Sable Island curios, but much of Herb’s appreciation and joy in his collection is the opportunity to share with visitors a gentle glimpse of Sable Island.

Janet Barkhouse visited Sable Island with Sandra because her mother, Joyce Barkhouse, CM, ONS, wrote Pit Pony, the story of Gem, a Sable Island horse, who worked in the Cape Breton mines with eleven-year-old Willie MacLean. After her visit, Janet wrote Sable Island—Imagine! for children, as well as the text for Pit Pony: The Picture Book. In 2017 she teamed with Zoe Lucas to create a chapbook of her poems and Zoe’s photographs, called Sable Island Fieldnotes. Herb has all these books on display in his Sunroom Museum.

Sandra Barry is an Elizabeth Bishop scholar: Bishop had visited Sable Island in 1951; Sandra and Zoe met each other because of this and became friends. Zoe wanted people connected to Sable through their interests to experience the island for themselves. You can read Sandra’s account of her afternoon on Sable Island at the blog she keeps for the Elizabeth Bishop Society.