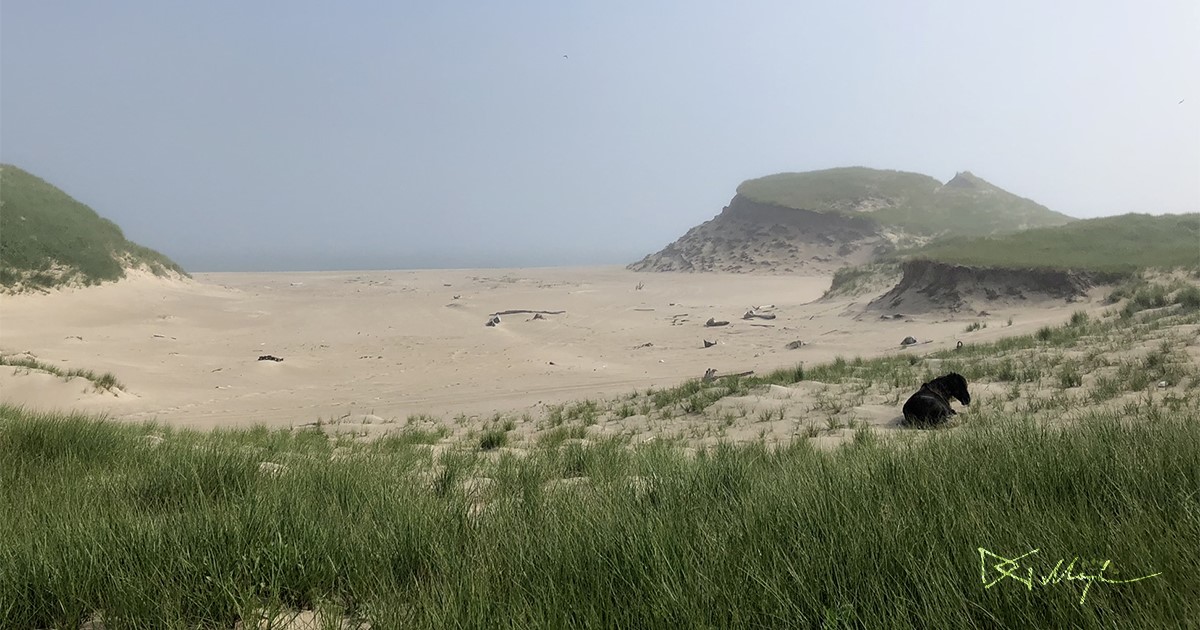 02 May The Shifting Sands of Sable – Devon James Gillighan, February 2020

Image above: A black stallion bathes in the morning sun as the fog roles out north of the Coast Guard station.

Some places change your life…

In the summer of 2018, I had the privilege and honour of visiting Sable Island for the first time. I was there in a professional role – helping lead an expedition with my friend Fred Stillman of Kattuk Expeditions. I have taken the time to reflect deeply on the experience and the impact it has had on me.

Since I was a child I have dreamt of Sable Island. Growing up I often imagined Sable as a mystical and fantastical place: part Avalon, part Jurassic Park, and part Treasure Island. Islands have always fascinated me; I have an affinity for them – my last name is Gillighan after all. Sable is a deservedly romanticized place. In trying to find the words to personally describe my experience I urge readers to look up the word “Topophilia” (love of place); when you find that word it should read: “See Sable Island”.

Like a mantle of sand born of the deep, le sable, “the island of sand” rises from the continental shelf, swept into existence by the fierce North Atlantic. Sable Island is seemingly cleaved from the currents as if it were a diamanté golden crescent moon that waxes and wanes – faceted with ever changing jewels. On top of the highest dunes both shorelines are visible, and the ocean seems mesmerizing, frightening, unrelenting, and vast. The water and sky merge in an amorphous frame; enveloping the island in dynamic blues and greys with shadows and highlights. The water and winds surrounding Sable act as parents – they feed, direct, and discipline it. Despite the looming ocean, there are times when the shape of the island and its golden sands create an illusion of an infinite beach that sweeps into the ocean like a dress in water. 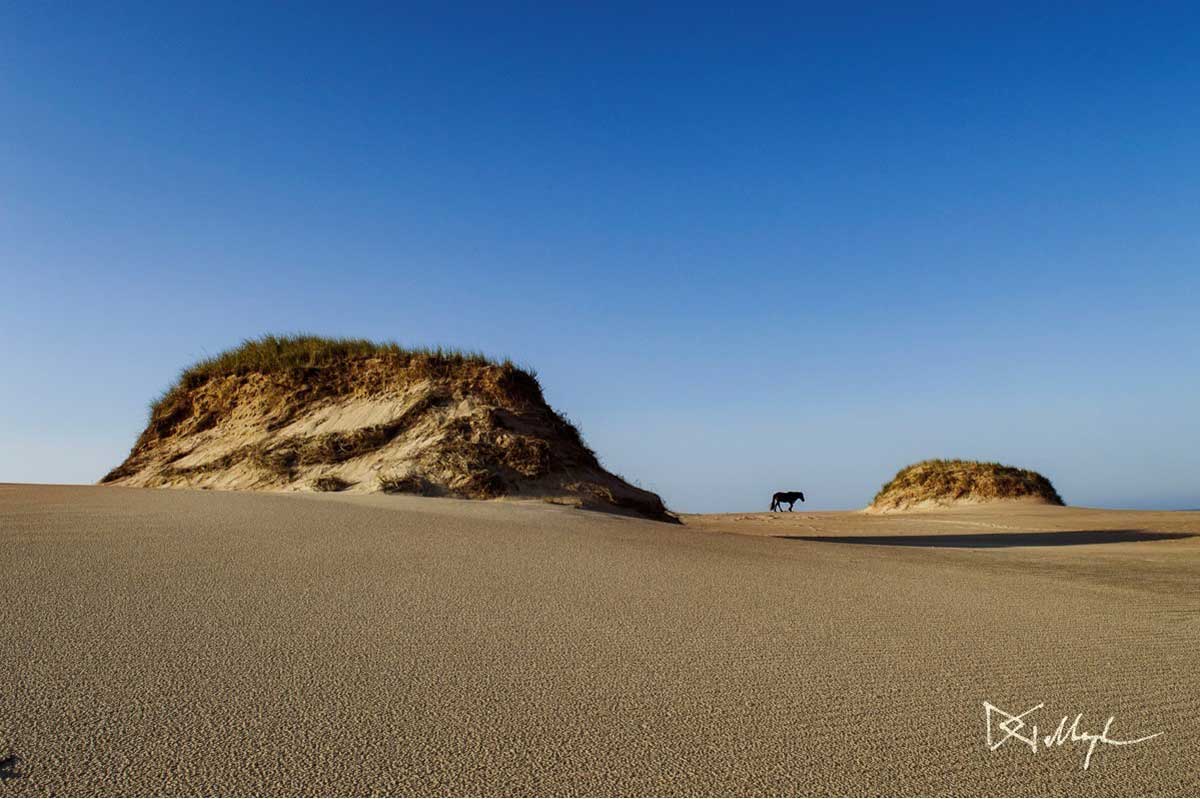 The early morning trek of a bachelor stallion atop Bald Dune.

Sable is sand in an hourglass that never stops – where the feral unbridled horses that inhabit it are akin to the wind and waves despite the dominion of man. Here the elements are interconnected with the flora and fauna of the island; together in congruence they orchestrate and choreograph Sable’s ecosystem. What may look chaotic to the human eye is but routine on Sable. The ocean and wind dictate virtually all movement on the island, but there are exceptions. Unlike the roving quartz sand, the heavy, dense grains of black magnetite and red garnet resist the wind in defiance, forming streaks and scars of dark and light across the beaches and dunes – like the pattern on a zebra or a tiger.

The air on Sable is clear and unadulterated. Smells are heightened and varied – mysterious, floral, fresh, and familiar. The musky hint of sand mixes with that of the ocean, aromatic bayberry, rose, sweet smelling grasses, heath, seal, and of course wild horse. One moment the scent is sweet and fresh – full of life and the next the air is putrid – filled with death and decay. On Sable the sounds of the elements and life are usually wonderfully legato and harmonious with the occasional neigh, nicker, snort, and even roar from the horses. The sporadic hum and buzz of wild bees can be heard as they diligently undertake their mission; zigzagging  back and forth from their active nesting colonies in the shallow soil. The seals, lounging in the sun like a clique of entitled water polo players add their own cacophony of raucous dissonant vocalizations to the chorus of Sable.

Sable is ethereal yet earthly, impassive yet moving, resilient yet fragile. The island is only ethereal and delicate in the context of human “progress”, i.e., the horses that were put there and our petroleum-based world that looms, encroaches, and entrenches in the form of plastics, energy exploration, and of course climate change. Unto itself, Sable is hauntingly striking and stoic – it needs nothing and no one.

There are many times in life that our expectations inevitably set us up for disappointment. In the past, I have taken much for granted and therefore have faced many disappointments and sorrows. There have been times in my life that the longer I imagined and dreamed about something, it never went the way (or was what) I expected – for better or worse. It is in those special moments of life, when the outcome far exceeds our expectations (more often as a result of action) that we come to a deeply personal and profound understanding, and sense of gratitude. Sable is so much more than what I could have imagined. It is impossible not to feel in complete awe when on Sable. Sable taught me a subtlety of gratefulness about life and nature that I may never have discovered otherwise. On Sable I reaffirmed my belief that finding meaning and purpose in life is simple, when you are open to it; that life is dauntless. As the fictional character Dr. Ian Malcom said in Jurassic Park, “I’m, I’m simply saying that life, uh… finds a way”.

Sable is the kind of place that leads to deep reflection, understanding, peace, and absolution. Sable has the power to catalyze answers, crystalize resolve, heal, and give a person a profound sense of place in this world – if you look for it. Sable is a place that will open your eyes when all you can do is squint; focus your mind when all it does is wander; rejuvenate your curiosity when you’re tired, and return a soul – even if when it’s presumed lost.

I believe that Sable acts as a metaphorical lens – a place where both the collective and individual can acknowledge and understand nature both externally and interpersonally on various levels. Sable Island is a treasure in every way. On Sable, as you look out to the horizon in 360 degrees you can’t help but feel a sense of existential calm. Sable Island is possibly the most authentic place I have ever been.

Although Sable is ecologically strong and self-sufficient, there is evidence of the looming outside Anthropocene world. Sable is a place not intrinsically suitable for humans. It is a fascinating glimpse into an almost idealistic world, virtually sequestered from humanity – our faults, and failures. Often, we as humans only think in terms of conquering or harnessing a place – that a place only exists when we’ve been there and captured its “essence” with a cellphone selfie. Sable is not a place to conquer – to visit Sable Island is to relinquish ego and therefore respect it very deeply. Those that are familiar with Arne Næss will understand when I say that Sable Island is the epitome of “Deep Ecology”.

During the times when hiking Sable’s beaches and dunes, I imagined the feeling of being marooned. Sable seemed almost analogous to a world where humans only exist in the past. It is a place where the anthropocentric world seems but an afterthought. A place where the time shifting sands hone a sixth sense. In a world where the effects of humanity are everywhere Sable strives to defy our dominance and remain a precious place despite us.

To say that Sable Island is a place of pure beauty is like saying rubies are simply red or sapphires are just blue. Sable is more than just horses or seals. Sable is more than just a 34 km2 sandbar. We can learn so much from her if we are willing to keep ourselves in check. Sable is an ecological mirror, an indicator, and a model of how we as humans need to behave in order to be adaptable in a time of uncertainty.

Some places change your life…