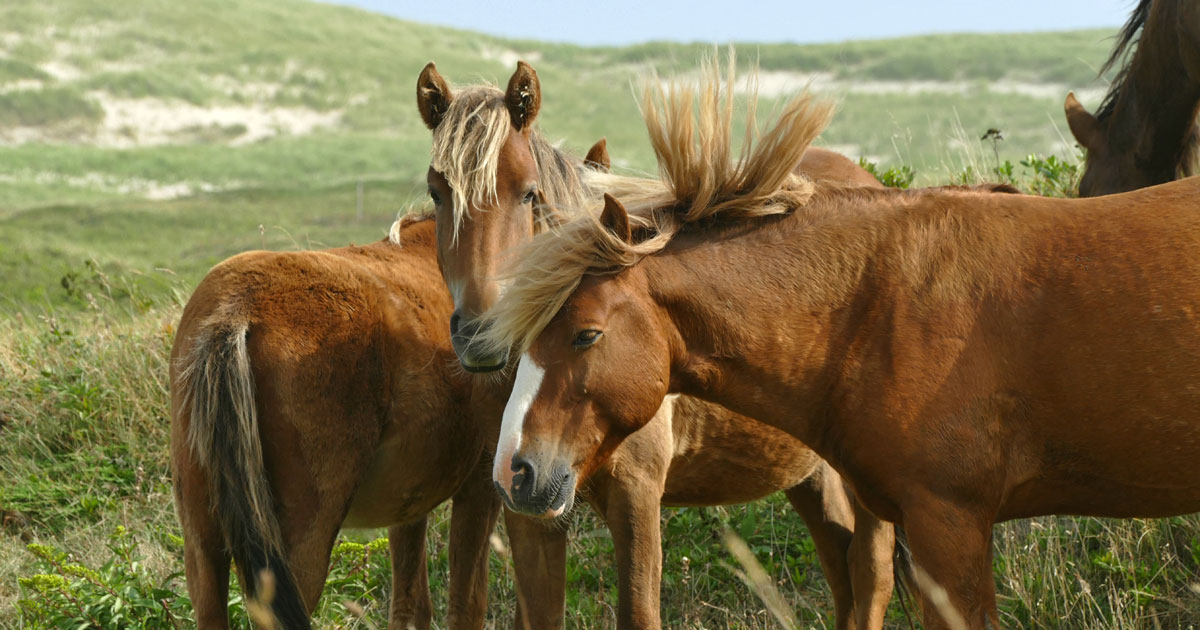 Image above: Sable Island horses standing in the lee of an inland dune as Hurricane Dorian approaches and the wind picks up, September 7, 2019.

The meeting is open to the public, and there is no admission fee.

The meeting will be emceed by Mark Butler (Ecology Action Centre), and the program will begin with an introduction to the Sable Island Institute, followed by three illustrated talks. Speakers Krista Patriquin and Eryn Foster will discuss features of the island’s ecology and research, and its role as an inspiration and subject in the arts. Zoe Lucas will review some significant events and highlights of the past few years. The presentations will be followed by a Question & Answer session, and Alannah Phillips, Park Manager, Sable Island National Park Reserve, will join the speakers for the Q&A. The meeting will conclude with a reception (snacks and beverages) and conversation.

This public meeting has been organized by the Sable Island Institute and the Ecology Action Centre, and is co-hosted by Saint Mary’s University, the Canadian Parks and Wilderness Society, the World Wildlife Fund, and the Nova Scotian Institute of Science.

The Science of Sable: from Sand to Horses and Everything in Between.

Krista Patriquin completed her BSc Honours at Mount Allison University, MSc at the University of Calgary, PhD at Dalhousie University, and a Postdoctoral Fellowship at the University of Toronto Mississauga. Throughout her career, Krista has sought to better understand ecological relationships across Canada, as well in parts of the USA and Central America. She is now a project manager with the Sable Island Institute, where she looks forward to supporting a multidisciplinary ecological study in partnership with Parks Canada.

Talk subject: Well known for its shipwrecks and horses, Sable Island is also home to several rare and unique species whose distribution and status is poorly known. Similarly, little is known of the interactions among species and how these shape communities. We need a holistic approach to these questions if we are to understand the effects of abiotic (e.g., climate change, marine pollution) and biotic (e.g., horses, seals, and visitors) influences on the island’s communities. To address these gaps, the Sable Island Institute will coordinate a team of researchers with expertise in key areas who will collaborate on gaining an understanding of the island’s terrain, flora, and fauna.

Eryn Foster is a Halifax-based interdisciplinary artist, curator, educator, community arts organizer and arts consultant. Presently she is working in collaboration with Nocturne Art at Night and ISANS (Immigrant Services Association of Nova Scotia) developing creative and interactive programming with local artists and members of the newcomer community. In addition to teaching part-time at NSCAD University, she has also organized several unique art and curatorial projects throughout Atlantic Canada and beyond. Most relevant to the work she is developing with the Sable Island Institute, is Pictou Island Portage, a 7-day walking-based artist residency that she created in partnership with Dalhousie Art Gallery in 2014.

Talk subject: Eryn Foster will speak about an interdisciplinary art and science project she is developing in collaboration with the Sable Island Institute. As part of this presentation, Foster will highlight how Sable Island, both past and future, has been an inspirational site for artistic creation, imagination, and exploration. She will also point to examples of some of the numerous artists from around this region and abroad, who have come to visit the island and make notable works of art in response to their experience.

Some Interesting Observations and Notable Events on Sable Island

Zoe first visited Sable Island in 1971, and during the past four decades has been involved in numerous research and environmental monitoring programs. Recent work includes surveys of the foraging activities of the island’s bee populations, and studies of beached plastic pollution and oiled seabirds. Since 2004, Zoe has been a Research Associate with the Nova Scotia Museum of Natural History, and in 2008 received an Honorary Degree from Dalhousie University.

Talk subject: The last Sable Island Update was held in 2015. Since then there have been some significant changes, and new projects and partnerships initiated. Zoe will review some of the more recent events and highlights on Sable Island, and will summarize preliminary results of the past summer’s study of beached plastics conducted in partnership with Parks Canada.