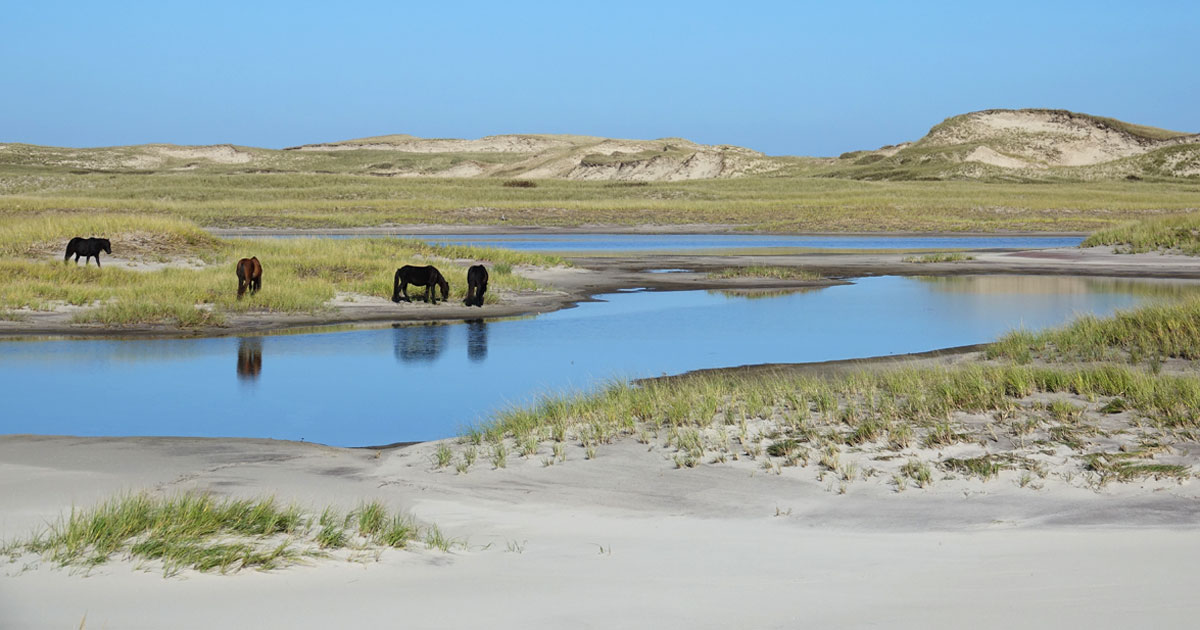 Image above: In late September, six days after Hurricane Fiona, Sable Island horses walked through shallow floodwater on the south beach to graze beach grass growing on the new dunes developing on the Sandy Plain.

The meeting is open to the public, and there is no admission fee.

Prior to the program of presentations in the auditorium, there will be a special event in the reception area (6:00-7:00): “Sable Island Horses: Getting to the Bare Bones! Part 1”.

The auditorium program (7:00-9:00) will begin with an introduction by Mathieu D’Astous, A/Park Manager, Sable Island National Park Reserve, Parks Canada, Sable Island National Park Reserve, followed by three illustrated talks. Speakers Kate Chadwick and Richard Orton will provide further details about the study of Sable horse skulls, Lisa Phinney Langley will discuss the role of the arts in understanding and communicating science, and Zoe Lucas will review some recent events and highlights. The presentations will be followed by a Q&A session and a door prize draw, and the meeting will conclude with a reception (snacks and beverages) and conversation.

This public meeting has been organized by the Sable Island Institute with partners Saint Mary’s University, the Ecology Action Centre, the Canadian Parks and Wilderness Society, Nova Scotian Institute of Science, and Parks Canada.

Sable Island Horses: Getting to the Bare Bones! Part 1

Prior to the program of presentations, there will be a special event in the reception area (6:00-7:00). Come early to see a display of some Sable Island horse skulls, and to speak with the team of Saint Mary’s students who have recently measured, catalogued, and photographed the Sable Island Institute’s research collection, creating an easy access tool for future work. Learn about how they studied horse skull morphology, and tried to differentiate males from females and examine the ages of the skulls! Plus, see some skulls with unique characteristics that were found during the research. The program of illustrated talks in the auditorium (see below) will begin with a presentation providing more detail about this study. This project is a collaboration between Saint Mary’s, the Sable Island Institute, and the Nova Scotia Museum.

Sable Island Horses: Getting to the Bare Bones! Part 2

Kate Chadwick is a PhD student in the Frasier Lab at Saint Mary’s looking at the epigenetic effects of stress on North Atlantic Right Whales. Originally from the UK her previous experience includes scientific data collection for Marine Protected Area management and designation as well as fisheries science. She has 5 years of experience as a terrestrial ecological surveyor working with bats, snakes, lizards and other protected species.

Richard Orton, originally from Atlanta, Georgia, has a research background in reptile behavior and population genetics. He has a master’s degree in Quantitative Biology from the University of Texas at Arlington, and is now working in the Frasier Lab at Saint Mary’s on a PhD in Right Whale conservation genetics.

Talk subject: During the summer of 2022 over 600 Sable Island horse skulls were carefully removed from storage and brought to Saint Mary’s University here in Halifax. These skulls had been collected by Zoe Lucas since the mid 1980s.

The focus of this project was to inventory, and quality assess skulls individually, creating a written and photographic record to be stored by the Frasier Lab and the Sable Island Institute in a bespoke database. Additionally, our aim was to establish, if present, skull variation and diversity within the population based on sex and age class. Finally, we hoped to utilize known tooth metrics to age each horse, placing them in age classes and comparing this with known age horses and thus ground-truth these methods. We will discuss the project in more detail and present some early results.

Lisa Phinney Langley is Artistic Director of Phin Performing Arts; co-founder of Mocean Dance, and a member of the Sable Island Institute’s Arts Committee. Throughout the past 20 years Lisa has worked at Dalhousie University and Environment and Climate Change Canada as atmospheric scientist, where her work has taken her from the rainforests of Puerto Rico to the shores of Sable Island, via Mexico and the remote North Pacific Ocean.

Talk subject: Lisa will discuss the value of a transdisciplinary approach to environmental issues, highlighting the role of the arts in communicating science. She will offer a broad view of the relationship between the arts and science from her own experience in both fields, and introduce the Sable Island Institute’s new transdisciplinary project focussed on the issue of persistent plastics pollution in the ocean environment.

Some Interesting Observations and Notable Events on Sable Island

Zoe first visited Sable Island in 1971, and during the past four decades has been involved in numerous research and environmental monitoring programs. Recent work includes continuing beach monitoring surveys, and study of the ecological relationship between noctuid moths and beach grass. In 2008, Zoe received an Honorary Degree from Dalhousie University.

Talk subject: The last Sable Island Update was held in 2019, and then there was Covid. Zoe will review a few of the recent events on Sable Island and highlights of the Sable Island Institute’s activities, new projects and partnerships.