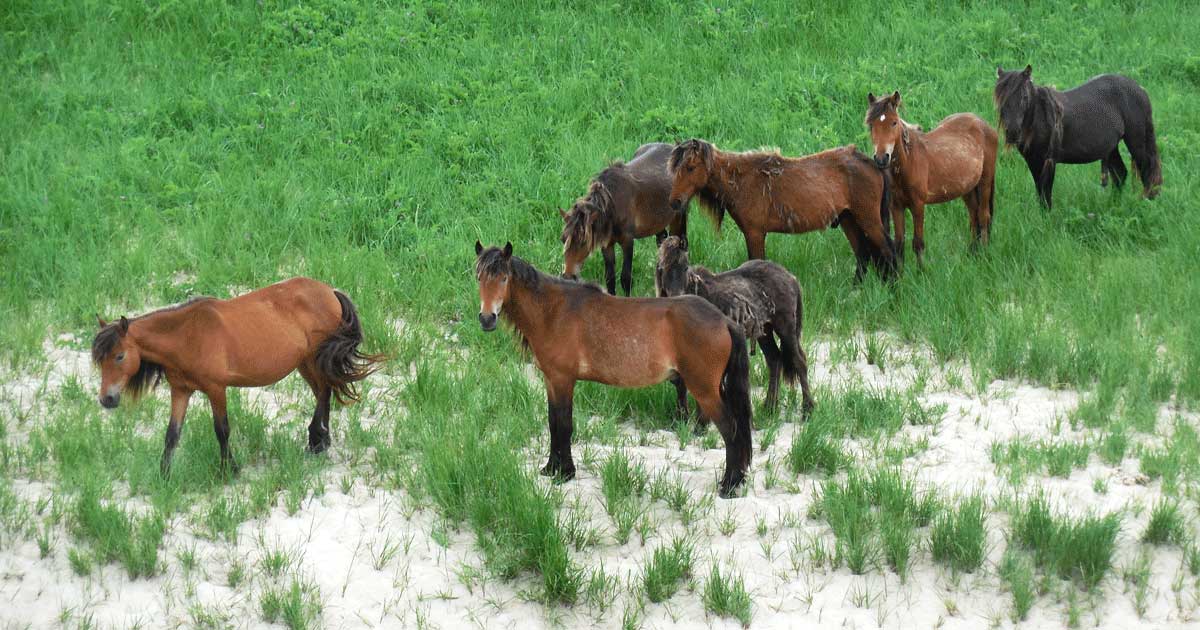 Image above: A beautiful family band grazes on the dunes.

I arrived in Canada from the UK in June of 1960, a couple of weeks before my 5th birthday. My seasick mother, grumpy father and I disembarked the RMS Saxonia at Pier 21, Halifax, our plans were to head to Toronto, where my father had taken a job with a construction firm. As my father argued with a clerk about our paperwork, Mummy and I walked down a corridor flanked with typically Canadian pictures: the RCMP Musical Ride, the Parliament buildings, the Rockies, the Far North. My eyes settled on a picture of beautiful horses on a pristine beach next to an azure sea (I was an aesthete at a young age!).

“Mummy, I want to go there,” I said, pointing at the depiction of what I later learned was Sable Island.

“Yes, me wee Dearie,” she said in her Glaswegian lilt. But we never got there. Not together. My mother died, a demented mess, in 2005, and I set my resolve then, at her deathbed. I would get to Sable Island somehow, before I, like Mummy, was “too late”.

Moving to Nova Scotia from Stratford, Ontario, in November 2007 made it easier to research my options for getting to Sable Island, odd given that in theory one can research anything from anywhere these days. I was encouraged by two people who had actually been there. Finally, by January of 2020, I had the funds in place, and jumped on the various websites (Parks Canada, Sable Aviation, and two photo safari tour companies) to get my name on the list; I didn’t care how I got there, I just had to go.

In 2020 I was to turn 65; my gift to myself was a day trip to Sable. For Mum and me. Added to which, I had just completed writing a novel that takes place largely on mysterious Isle Haute (near where I live) and ends on Sable Island.

The journey planning was not to prove easy or simple. Seats on Sable Aviation were limited, and booked out quickly. I was tentatively scheduled for October, a time when I feared hurricanes could interrupt, and I wanted to go as close to my July birthday as possible. Eventually a seat on the June 20th flight became available; I danced with joy!

In order to complete my novel, The Isle of Dwight, I needed to know more about Sable than what was on offer at Wikipedia, so I contacted the person whose name I knew from all my research: Zoe Lucas. We booked a phone meeting in March, just before she was to leave Halifax for another stint in her 40-year life on Sable. She was friendly, informative, and we shared a few laughs; her input was invaluable, and I was able to compete my rough draft, anticipating seeing in person what Zoe had described as life on Sable Island.

Then Covid-19 hit. The essence of novels, indeed all stories, is struggle, conflict. I felt like every step I took in trying to get to Sable was being thwarted by a litany of problems. My June flight was cancelled. I decided to leave my deposit with Sable Aviation in case something happened that would enable me to get there. A birthday gift arrived: I could be on their July 18th  flight to Sable Island. There were no guarantees, and of course, weather is always a factor. I crossed my fingers and toes. And waited for the magical word that we were good to go. It came.

On the morning of Saturday, July 18, 2020, one of the worst years in the world and particularly Nova Scotia, I got up early and drove from my home in Wolfville to the airport. In the fog and rain. Every weather forecast I could find predicted rain for Sable Island that day. Would we even get off the ground?

Our pilot, Debbie and her husband, Ted, concluded that it might drizzle a little on the island, but would clear up later. We were to take off as planned. I let myself feel excited at last!

Of course, when the aircraft broke through clouds, and we saw the gentle crescent of white sand in the dark sea, I wept. It looks so lonely there in the middle of the ocean; black dots in the water were seals, thousands of them, and in the dunes, the famed horses. When we landed on the south beach, a lone black horse stood casually in the distance, chewing on the grasses.

I followed most of my fellow travellers over the dunes and around the freshwater ponds to the north beach, and encountered a few bands of horses, all of who were either ignoring or just didn’t get the memo about the 20-metre space. They posed for pictures, nudged knapsacks and generally were pleased to see our group. But the lone dark horse on the south beach stayed with me. I had to go back to see him.

An only child and natural loner, I was intrinsically drawn to this horse. The rest of my group had split off and were elsewhere. When I returned to the south beach, he was resting, lying down, and he got up the moment I called hello, as if to say, “What took you so long, Pamela? I was waiting for you.”

I asked him if he would care to go for a walk with me, and we proceeded eastward along the shoreline. We walked slowly in the thick sand, and by now teeming rain. A tern dive-bombed me, and the horse gave it an angry statement. I spoke gently to this magnificent horse and he stayed apace. 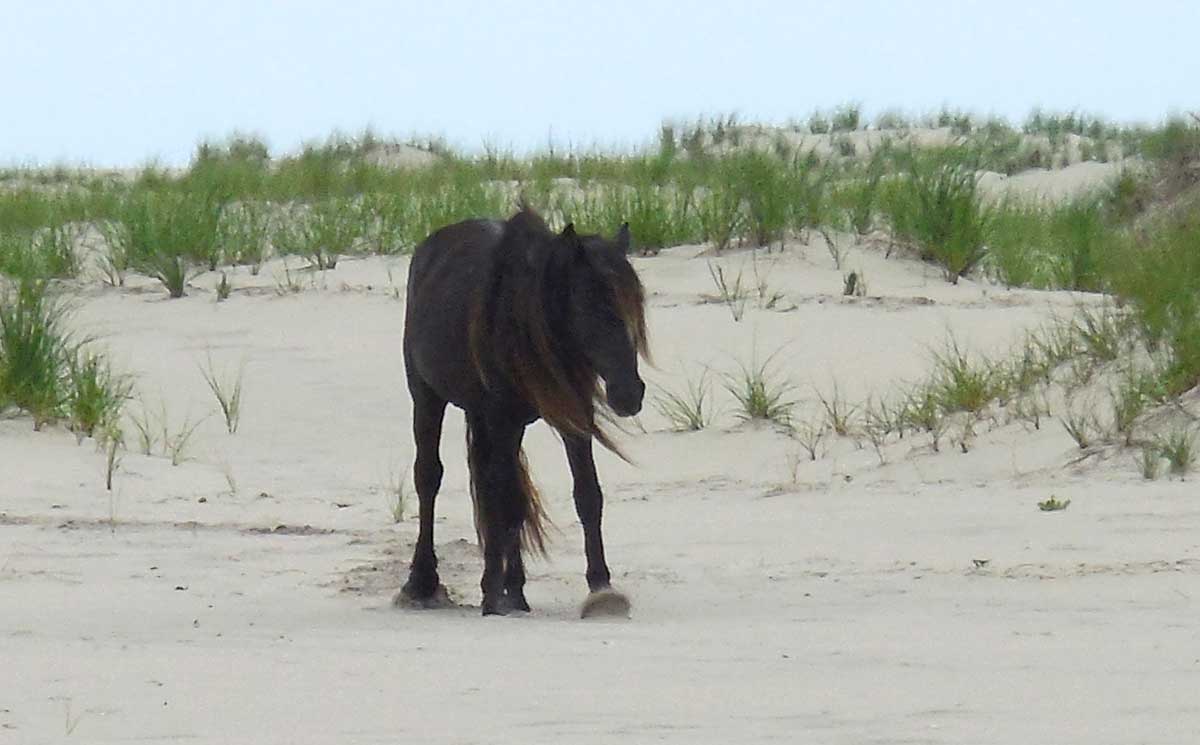 The gorgeous, gentle black stallion who walked along the beach with me and stole my heart.

My life has been one of loss. My true love when I was a teenager. My closest relative (my maternal grandfather) in my early 20s, and from there, just about everyone I have ever loved, including, in 2013, an adopted son at the age of just 21. Not to mention all of my beloved pets, 34 cats and 7 dogs. I studied the face and eyes of this powerful yet gentle creature and said, “Who are you? My Mum? Gramps? My darling Chris? My young Matthew?” He just nodded, sputtered a little and continued to walk, both of us now drenched, my sodden jeans starting to slow me down. I had no idea how far we had walked, but our human group was due to meet at the plane at 5:00 p.m.; time was running out and I wasn’t sure how long it might take me to get back to the aircraft.

“I have to go back,” I said, woefully, “Carry on without me; I will never forget you. I love you, and thank you.”

And we parted ways. It was agony. I turned at one point to watch him continue along the beach and I knew, intrinsically, who he was: not one of the dead, but me. Me. I had walked that day with my soul. 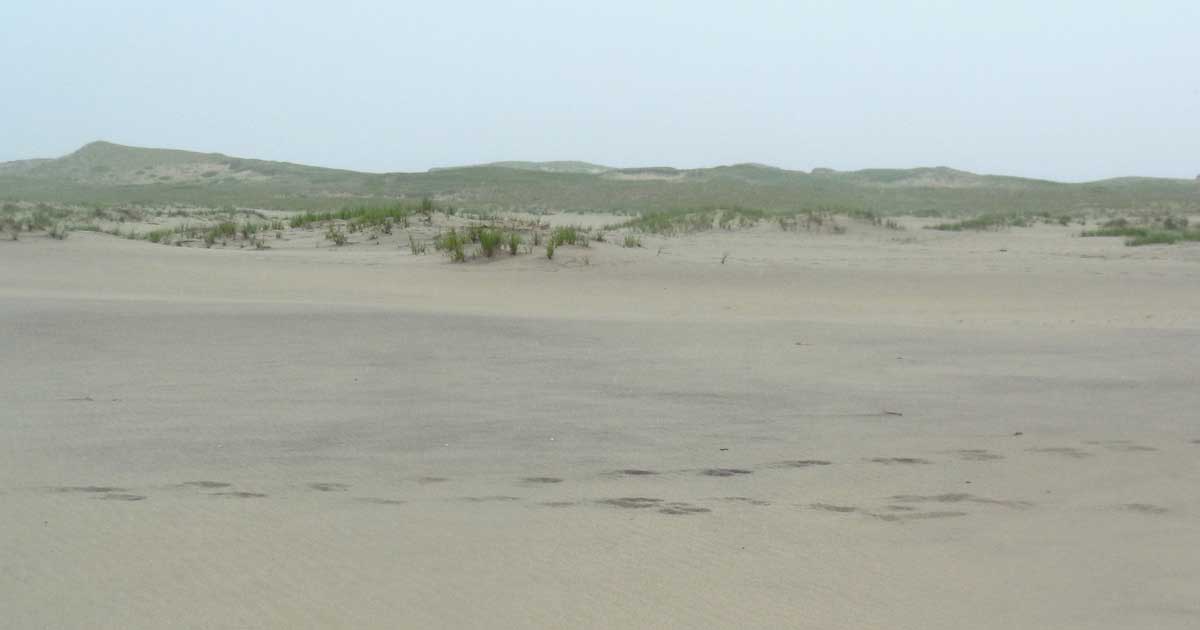 Our group gathered at the plane, soaked and chilly, sheltering under the wings. It had been a superb day, despite the rain, and people were eagerly sharing their photographs (I took a few, but my day was about walking with my horse; yes, I got a few lovely pictures of him).

As the plane ascended, all of us masked against Covid-19 and with headphones to block the engine noise, we lifted soon above the thick clouds and I realized that I had not just left the mainland of Nova Scotia that day, I had left the planet, my earthly tether, my mortal coil. I had — finally — been to Sable Island, where souls fly free.