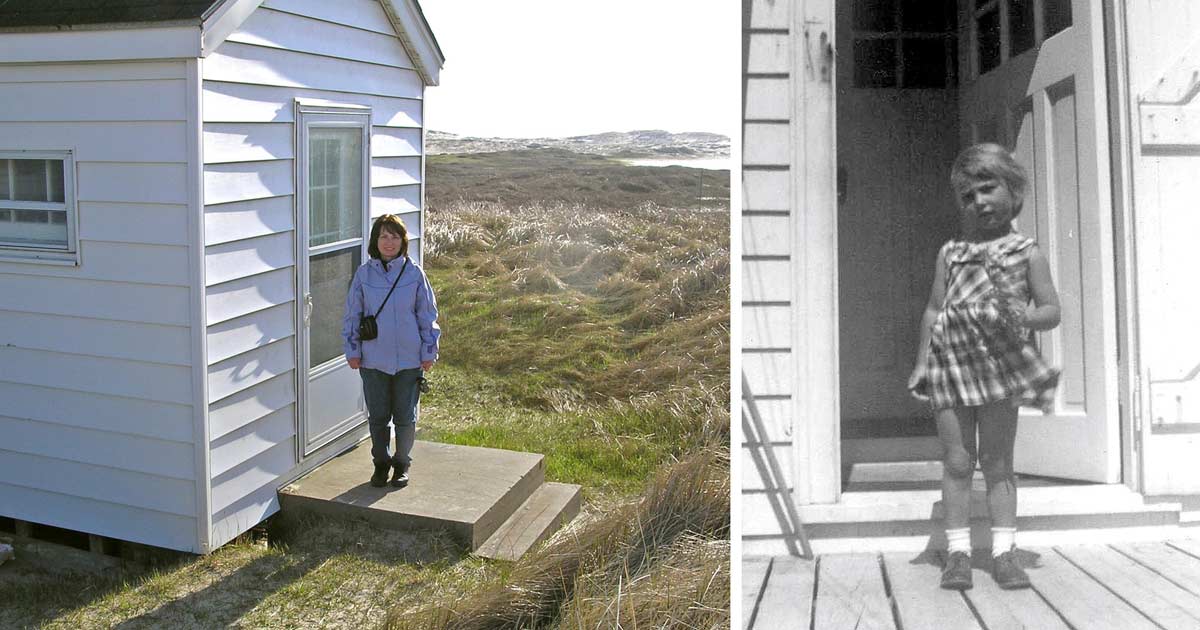 Image above: Cindy Clancey standing at the backdoor of the BIO House at West Light, and her much younger self standing in the same spot on a breezy, sunny Sable Island day 45 years ago.

* This article was first published in the Green Horse Society’s website, August 2008.

[In 2008, the Canadian Coast Guard was the management authority for Sable Island, and the Meteorological Service of Canada (MSC) owned and operated the Sable Island Station. The island became a national park in 2013, and is now managed by Parks Canada.]

In May of 2008 I had the privilege of returning to Sable for the first time in 45 years. I could barely contain my excitement when out of the blue, a tiny white crescent appeared. It is incomprehensible how this slip of sand could survive in the midst of the vast Atlantic Ocean. As we approached I could see that the island was teeming with life. Herds of seals in constant motion dotted the entire shoreline of the west end. Horses grazed on patches of green while huge flocks of gulls hovered above. As we flew over the West Light and Sable Island Station I felt as though I was watching my father’s home movies. 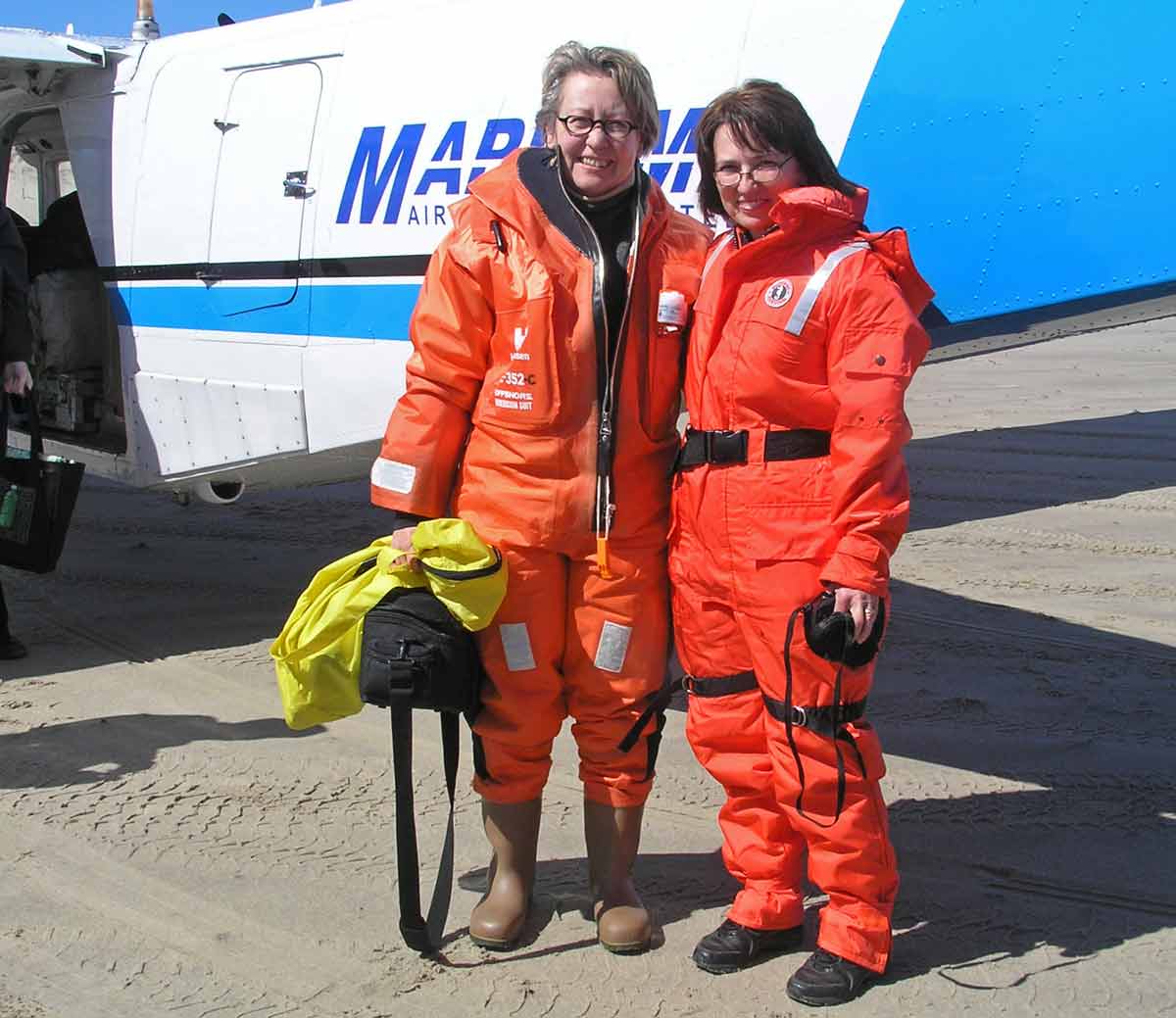 In May 2008, Susan Tooke and Cindy Clancey visited Sable Island for the day. While Cindy was returning after four decades away, it was Susan’s first time on the island.

When I stepped out of the plane, I was immediately struck by the magnificent scenery, an image that my father’s camera could not capture. The wide open sea and sky and rolling dunes were stunning, as was the massive South Beach on which we landed. By contrast the inland scenery was far more serene. 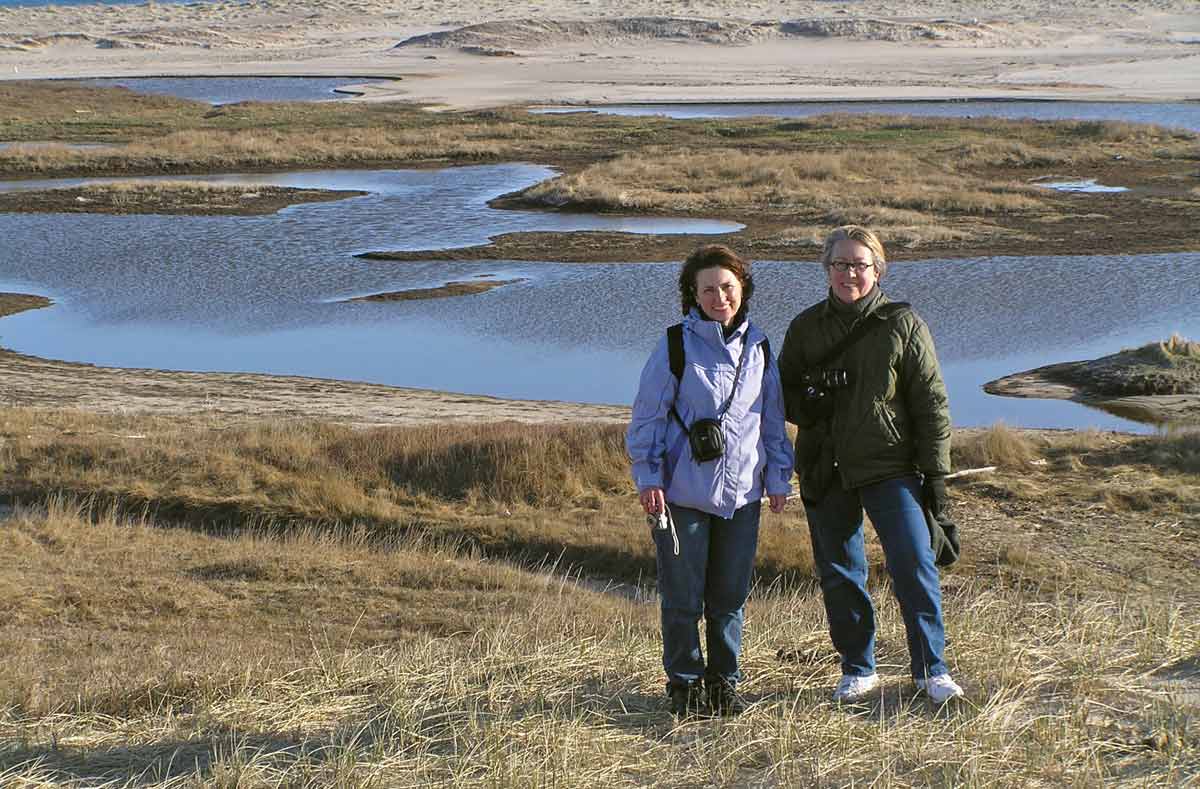 Cindy and Susan near the West Ponds.
In early May green leaves of beach grass and pea were just beginning to emerge and the landscape was still coloured with the golds, greys, and blues of winter.

As Zoe led Susan and myself among the dunes and freshwater ponds we saw Ipswich Sparrows flitting about and the occasional lonely seal which had strayed far from the rest of the herd. We encountered several horses and their foals. They would study us for a moment and then calmly resume grazing. They seemed oblivious to our presence. It was hard to resist the temptation to approach them. 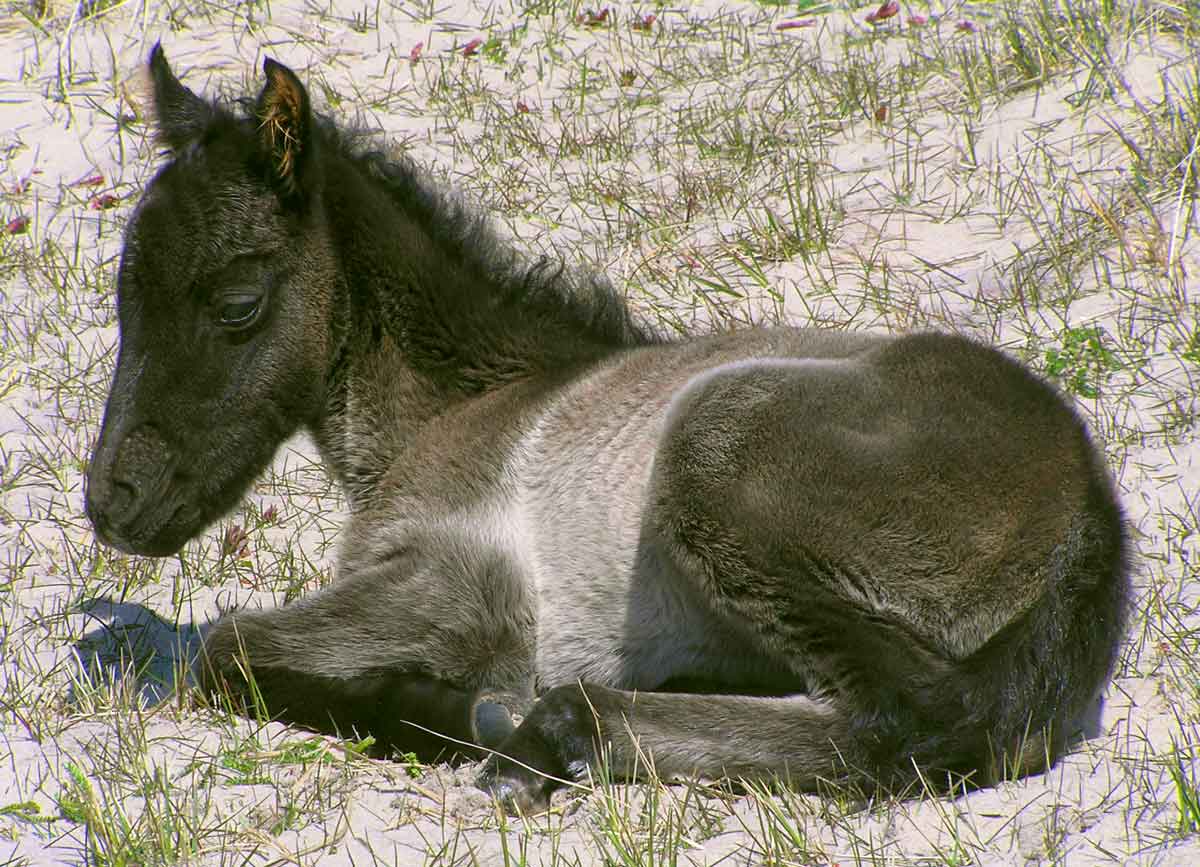 During their walkabout Cindy and Susan saw a few of the first newborns of the 2008 foaling season.

We spent most of the afternoon exploring the west end of the island, an area familiar to my family. At the site of the Old Main Station I caught a glimpse of the distant tower lights, and I could tell that we were in the right location.

However, the landscape had changed dramatically. Where it was once flat enough to see the South Beach in the background, it is now hilly with dunes. With the exception of a few corner stones and bits of rusty metal, the Old Main Station has virtually disappeared. It is amazing that these buildings could succumb to the elements so completely. There is a tremendous amount of history hidden beneath the sands of Sable.

The West Light area over a decade ago.
Over the years, the house at West Light has been home to various light keepers, technicians, and their families. Cindy, her mother, and father lived in this house during the early 1960s. The house is now used as a field research building by scientists studying the island’s seals, and is known as the “BIO House” (Bedford Institute of Oceanography).

The highlight of my afternoon was the visit to our former home at West Light. The buildings were weathered, and the beacon had been rebuilt and then decommissioned since our days on the island. Yet, it was a familiar and sentimental sight. The first thing I noticed was the fence that surrounded the house. This fence held a special significance for me. It brought back memories of my father, Sid Forward, explaining to my mother and I (some time after we had returned to the mainland) that some of the buildings, including the barn, had been removed, and that a fence had been constructed to keep the horses away. Although I did not understand the logic, it was my earliest indication that life as we knew it on Sable was changing.

Except for a few minor renovations, the house basically looked the same. The kitchen, the views from the windows and doors, and the living room were strangely familiar. I almost expected to see my mother’s clothes line, mop, and bucket on the back step. Of the bedrooms that we used, one has assumed a new role. It now appears to be a laboratory!

Cindy in the front room of what is now the BIO house.
Fisheries and Oceans gave permission to enter the house so that she could have a look at her childhood home. In this same room over 45 years ago, young Cindy and two other island children sat at a small table celebrating her fourth birthday with a big cake, balloons, and tinfoil party hats made by her mother.

Like the Old Main Station, the terrain at West Light is transforming. I was alarmed to see the shifting sand closing in on the buildings, particularly the Quonset hut. The road that was once relatively level now looks more like a trench. I have a new appreciation for the vulnerability of the landscape.

As we left the site I paused to take one last picture. I imagined what it was like when we lived there. I pictured the beacon slowly turning and flashing, large grey wooden swings, clothes flapping on lines, adults going about their chores while children played in the sand, chickens scurrying, and friendly horses competing for treats … but it was very quiet and still. Foundations are all that remain of the barn and beacon that my father once tended. There is little evidence of the domesticity that my family experienced at the West Light. Except in fond memories and pictures it seems unbelievable that such a scene could have existed.

Our last stop was the Sable Island Station where we were greeted by Gerry Forbes (Officer-in-Charge, MSC) who explained the many and varied roles of the station. During my family’s stay, these buildings were simply known as the Weather Station which reflected its primary role at the time. However, in addition to meteorological services, the Sable Station now participates in a number of impressive projects.

I have always associated the Weather Station with “Sci-Fi” gadgets and strange looking vehicles. I was amused to note that this childhood perception still applies. I must also admit that I was intrigued by the telephone service to the mainland which would have been quite a novelty in the early sixties. With such advances in technology, the island no longer seems so isolated. 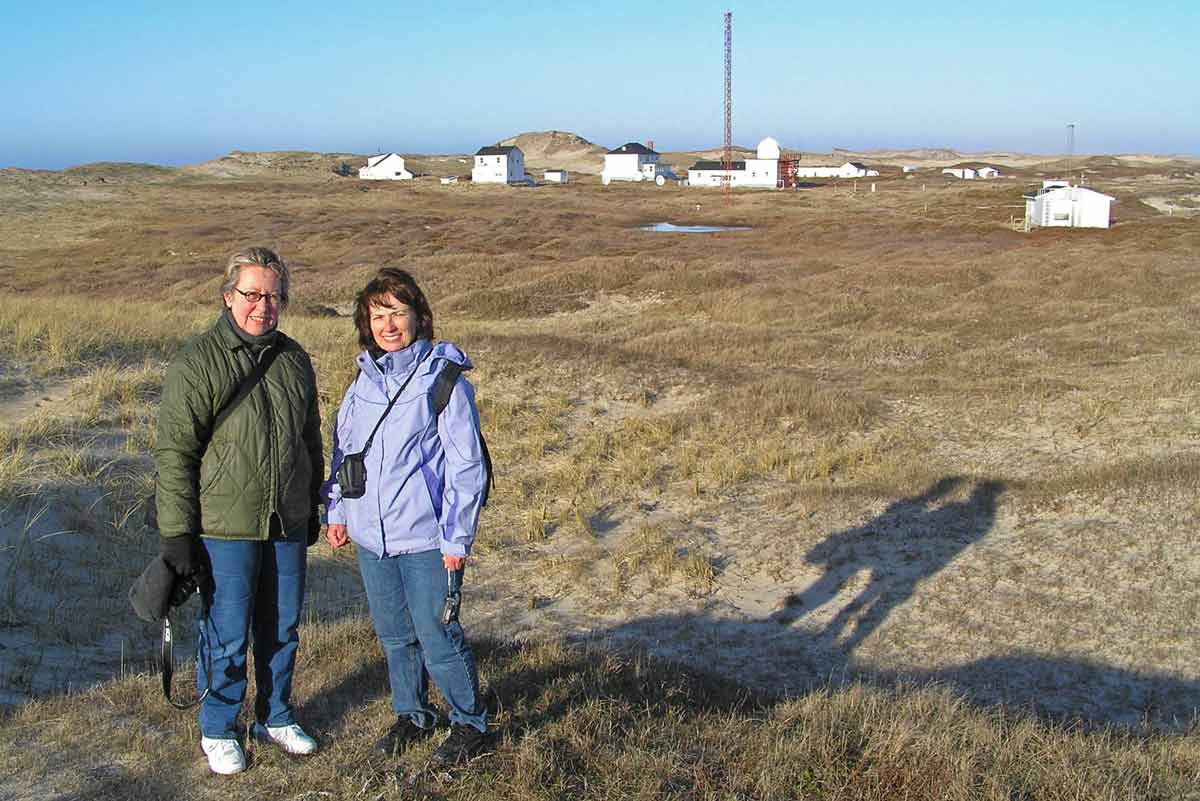 Susan and Cindy towards the end of their day on the island, heading back to the Sable Island Station (in the background).

After witnessing many changes, I began to understand that the key to the survival of the island and its inhabitants is change itself and the ability to adapt. On our journey from the west end to the Sable Station we observed traces of more than 200 years of continuous human presence.

The evolution of human activity became increasingly apparent at the site of each station that we visited. The Old Main Station had a central and essential role in rescue and survival. The West Light aided in the prevention of navigational tragedies. The Sable Island Station encompasses all of the above plus addresses timely matters such as environmental concerns. Perhaps current research on Sable will contribute to the prevention of disasters of a different nature.

We finally made our way back to the South Beach where our plane was waiting. As did my father, I videoed our departure until I could no longer see the island. Nevertheless, the impression Sable made on my Being as young child will last forever. This brief visit affirmed what my family has always known and respected. Sable Island is an extraordinary place aesthetically, historically, and scientifically. I feel extremely fortunate to have had this encounter.

by Cindy Clancey
Photos Sid Forward Family and Zoe Lucas
Originally published in the website of the Friends of the Green Horse Society, August 2008

As noted above, in 2008, when this account was prepared, the Canadian Coast Guard was the management authority for Sable Island, and the Meteorological Service of Canada owned and operated the Sable Island Station and provided the year-round human presence on the island.

And a note about Susan Tooke’s artwork:
The Sable Effect, 2009