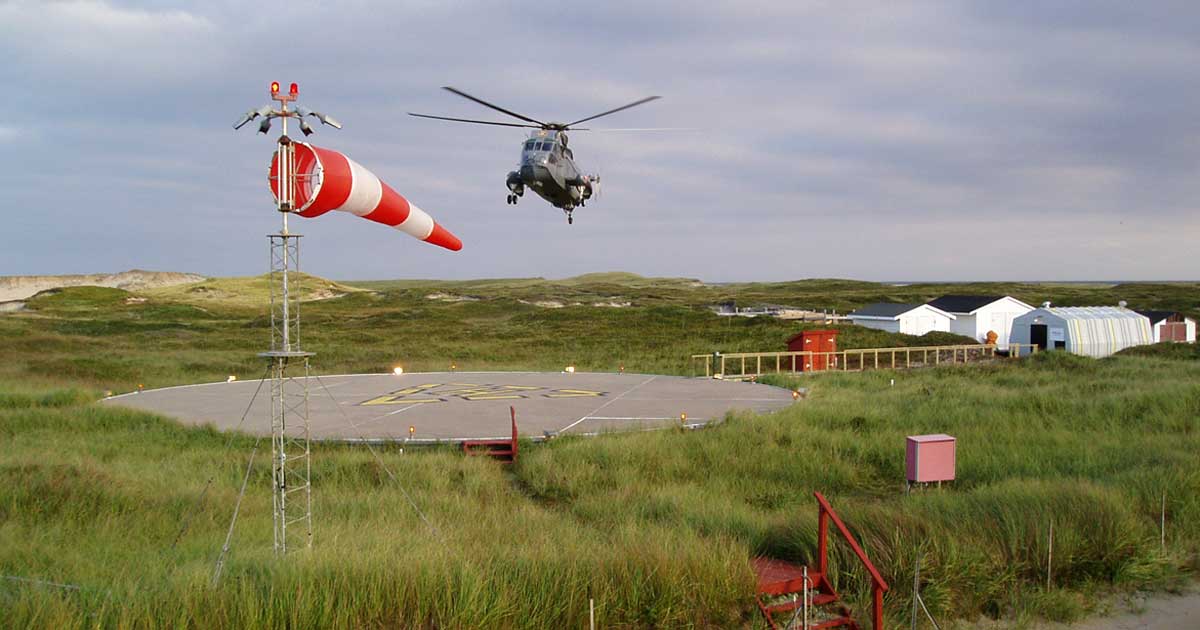 There are two helicopter landing pads on Sable Island. One, the primary pad, located at the Sable Island Station, was built by the Canadian Coast Guard (CCG) in 1984. The other, the secondary pad, located 1 km east of the station, was constructed in 1968 by the Department of National Defence (DND). Passengers and freight were generally picked up and delivered at the primary helipad, and the secondary pad was used for refuelling.

Canadian Coast Guard, DND, and the offshore energy industry (EnCana and ExxonMobil) had maintained a supply of fuel in drums at the secondary helipad. The industry’s fuel cache was for use in emergency situations. Industry helicopters did not routinely refuel on the island; during normal operations they refuelled on the offshore platforms.

In 1981 the offshore energy industry placed an enclosed fuel storage and pumping unit at the secondary site. In 2003, this unit was replaced by a new helicopter refuelling facility located at the primary helipad adjacent to the Sable Island Station.

In September 2003, a crew contracted by EnCana arrived to install the new helicopter refuelling facility on Sable Island. Meteorological Service of Canada (MSC) provided logistical support for the project. Until 2013, the Sable Island Station was owned and operated by MSC.

The new facility provided safe and secure storage of aviation fuel on the island. Although it was licensed, engineered, constructed, and maintained by EnCana, other groups (CCG, DND, and ExxonMobil) would use this facility to reduce the overall spill potential on the island. A multi-user approach would also be of benefit because greater fuel turnover ensured that there would always be fresh fuel in the system.

Construction of the Helicopter Refuelling Facility 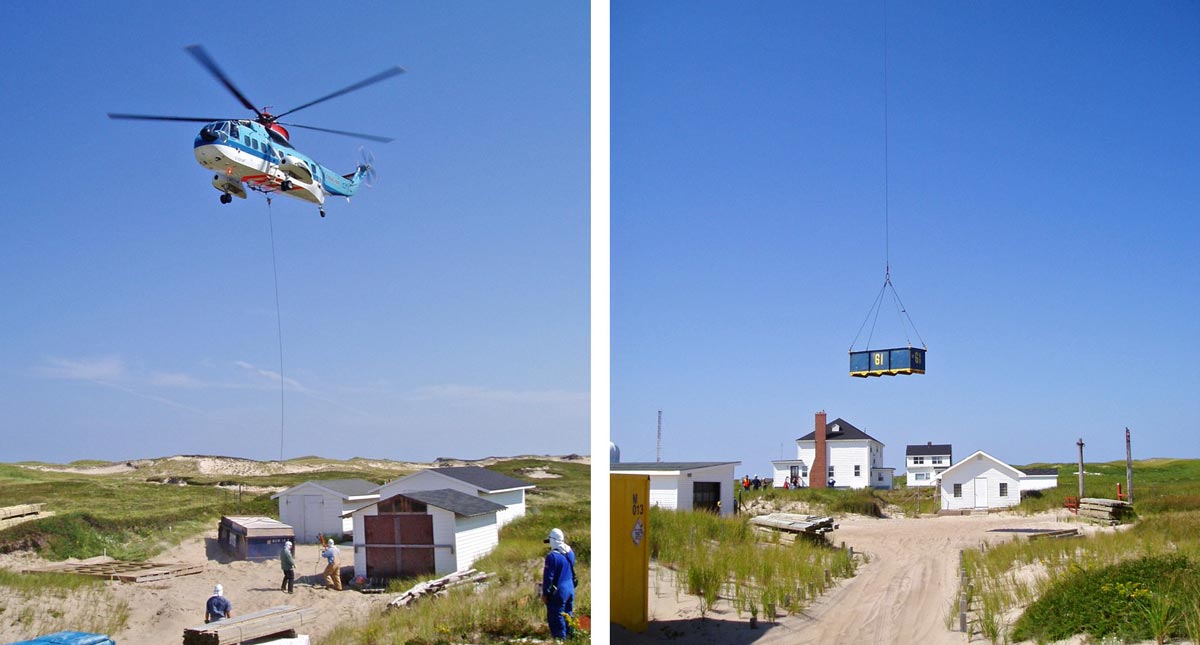 On September 14, 2003, an offshore industry vessel – the M.V. Mariner Sea – carrying materials and equipment for construction of the refuelling facility, anchored off the north side of Sable Island. Most of the load was packed in nine large offshore cargo baskets, and these, as well as the foundation and fuel tank, were delivered to the island by a Cougar S-61 helicopter operating for EnCana. 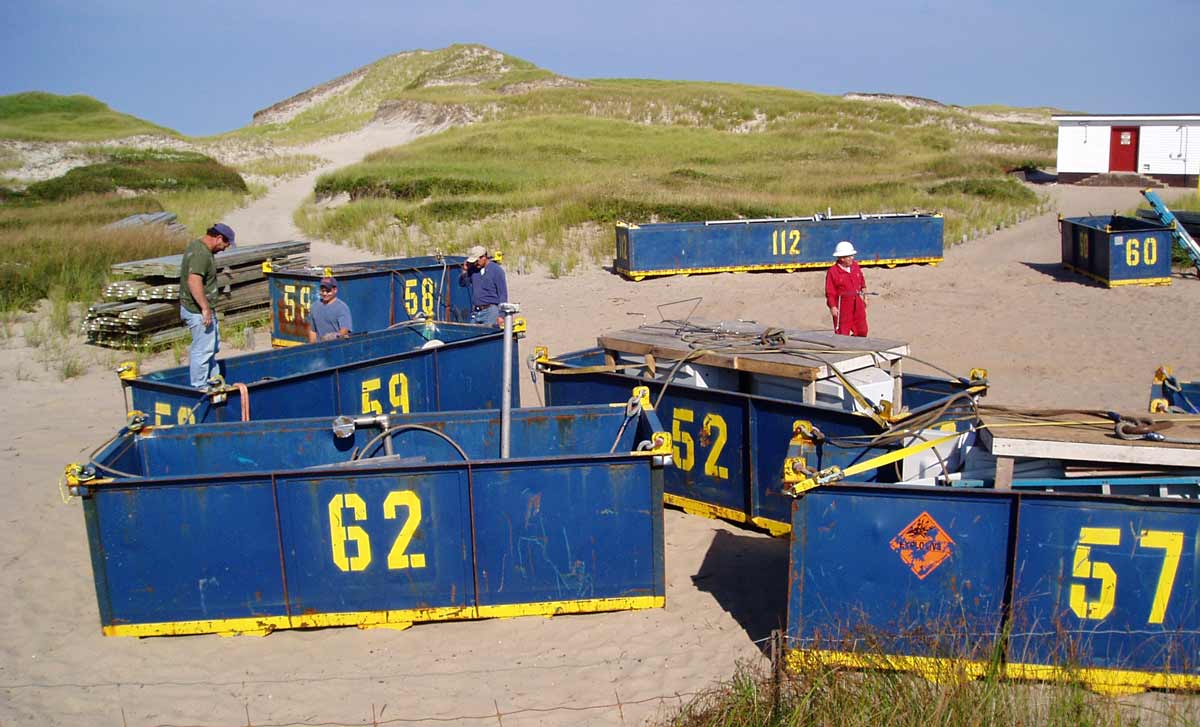 The baskets were set down in several designated areas at the station. Personnel with EnCana and the engineering contractor (AMEC Black & McDonald) handled ground operations during the slinging. Once all materials had been delivered, station staff, using the station’s Bobcat, assisted with deployment of heavy gear and supplies.

The refuelling facility was designed and prefabricated by AMEC in Halifax, and prior to delivery, had been assembled to ensure that everything was in order. The wooden foundation was brought to the island in two parts. 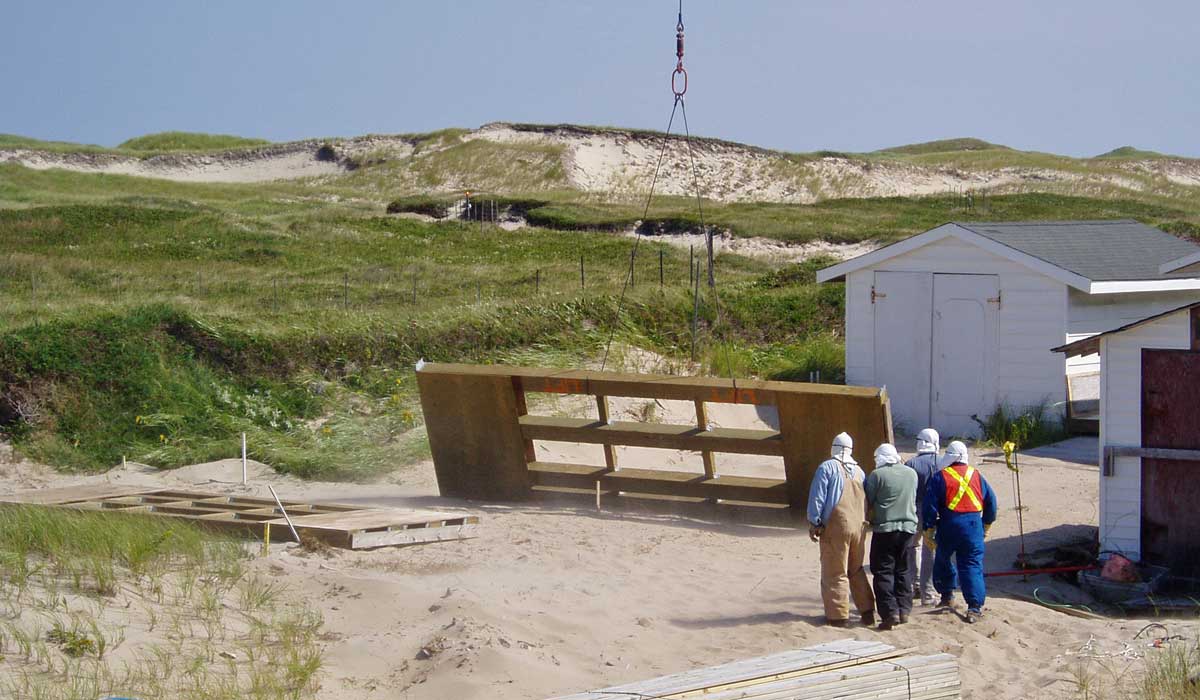 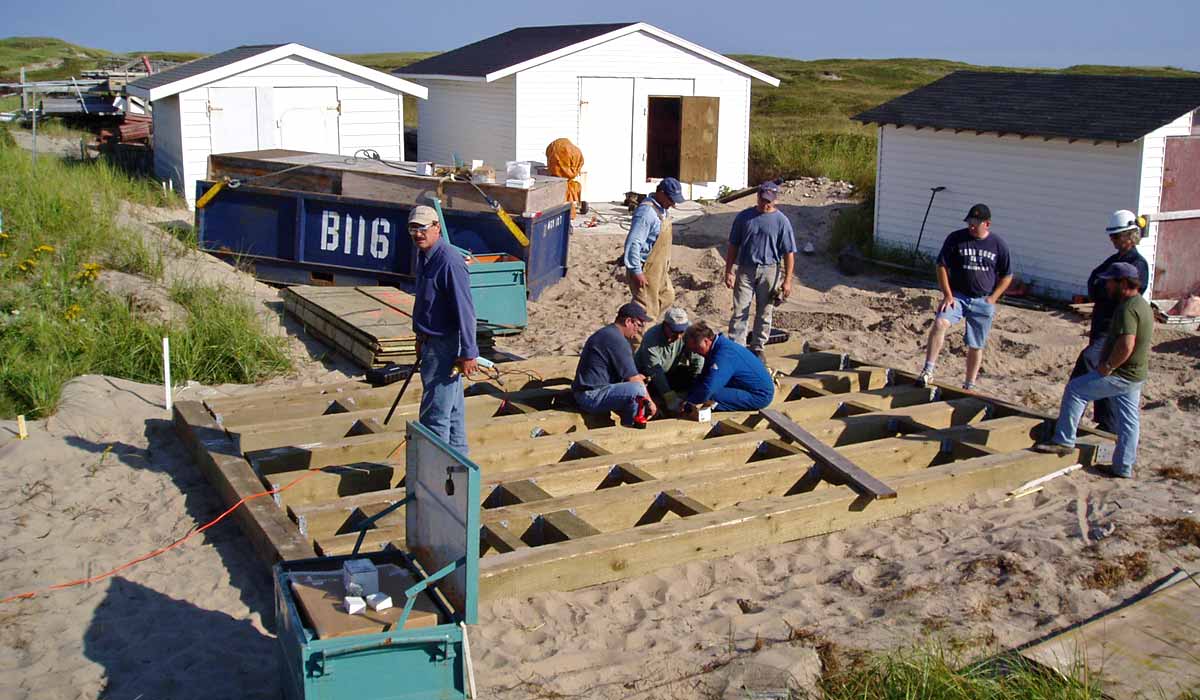 After both parts of the foundation (made of 10 x 10 beams) had been lowered into place by the helicopter, they were levelled and bolted together.

The foundation was covered with plywood which was then carefully swept to remove sand. While several persons applied adhesive, others rolled out and smoothed down a cover of an impermeable fabric which provided for a degree of spill containment. 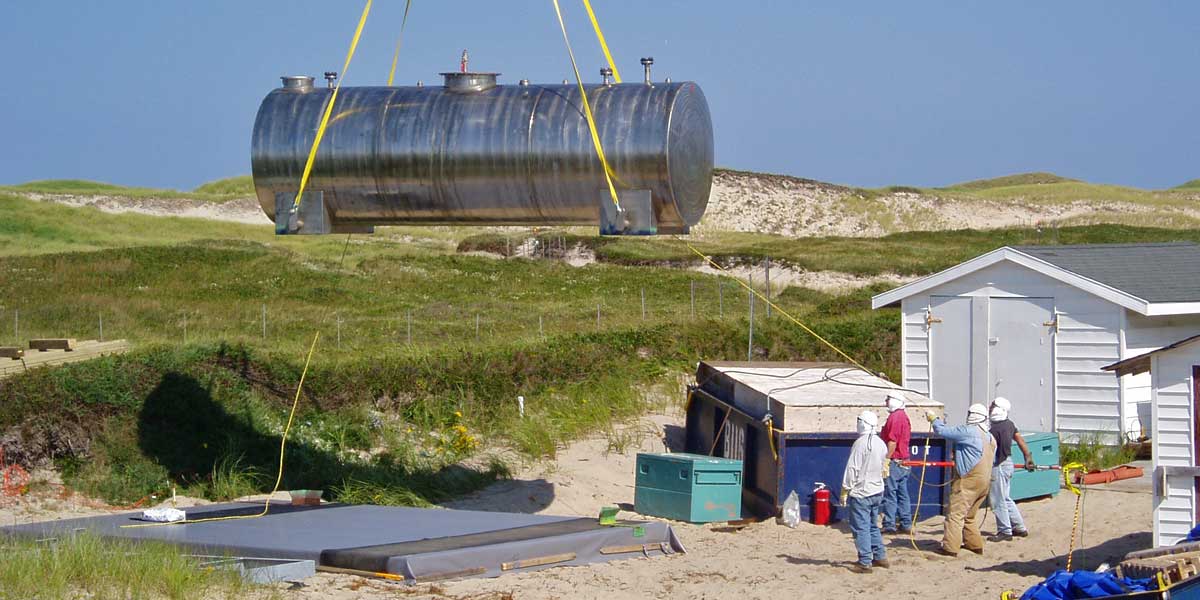 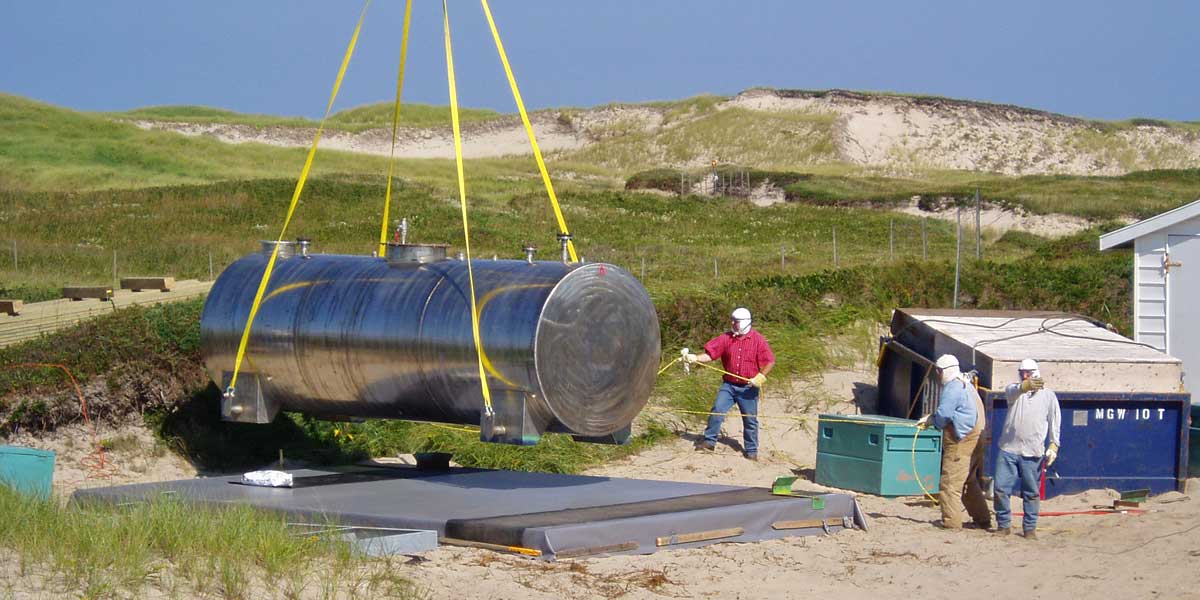 Placement of the tank on the prepared foundation required precision to avoid tearing the spill containment fabric. As the helicopter lowered the tank, the AMEC crew handled the tag lines. 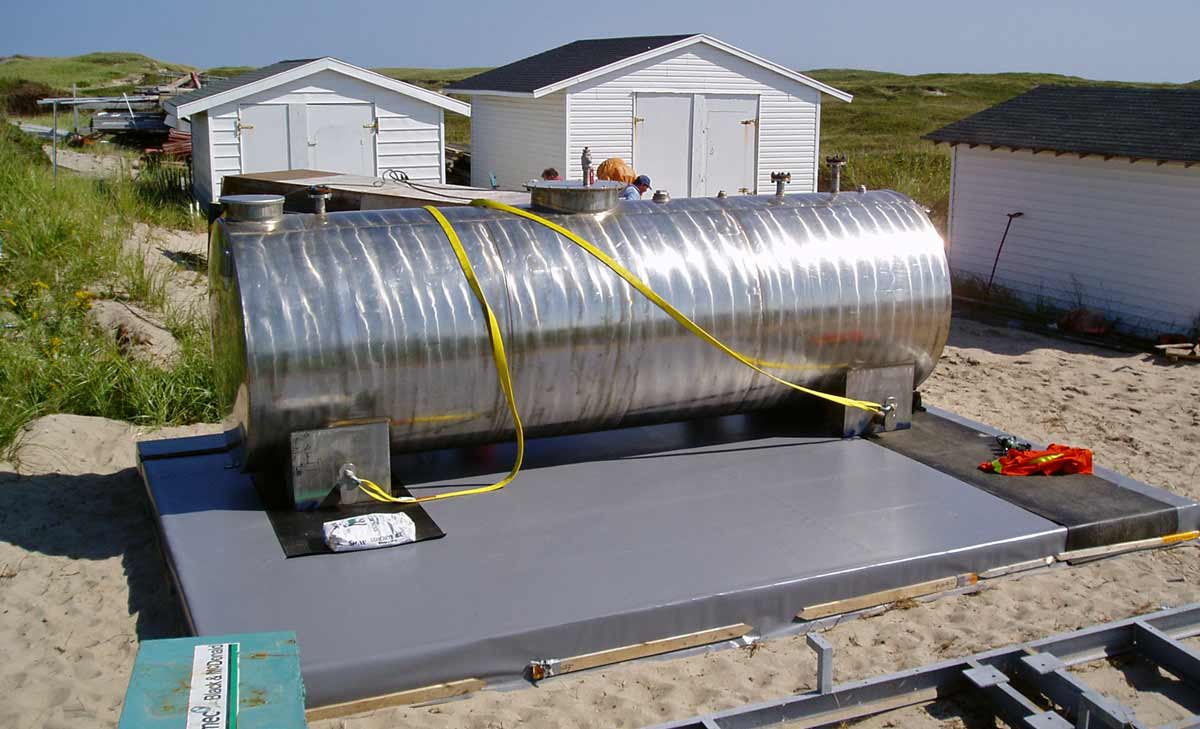 The worksite was in a hollow and backwash from the helicopter’s rotors set up gusts which caused the tank to swing and twist. But the tank was set down with its supports placed on the rubber mats protecting the spill containment surface. 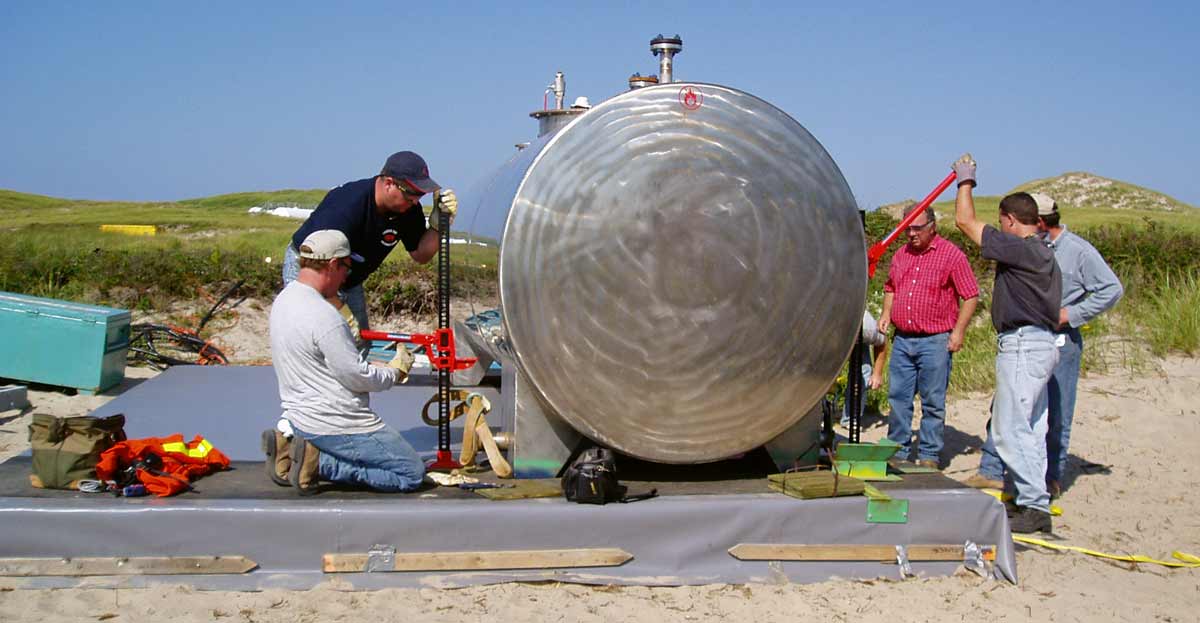 The tank required only minor position adjustments which were made using manual jacks.

With the tank in place, the rest of the facility’s equipment was installed. The station’s Bobcat, operated by MSC staff, was used to carry and position the heavier items such as the hose reel. 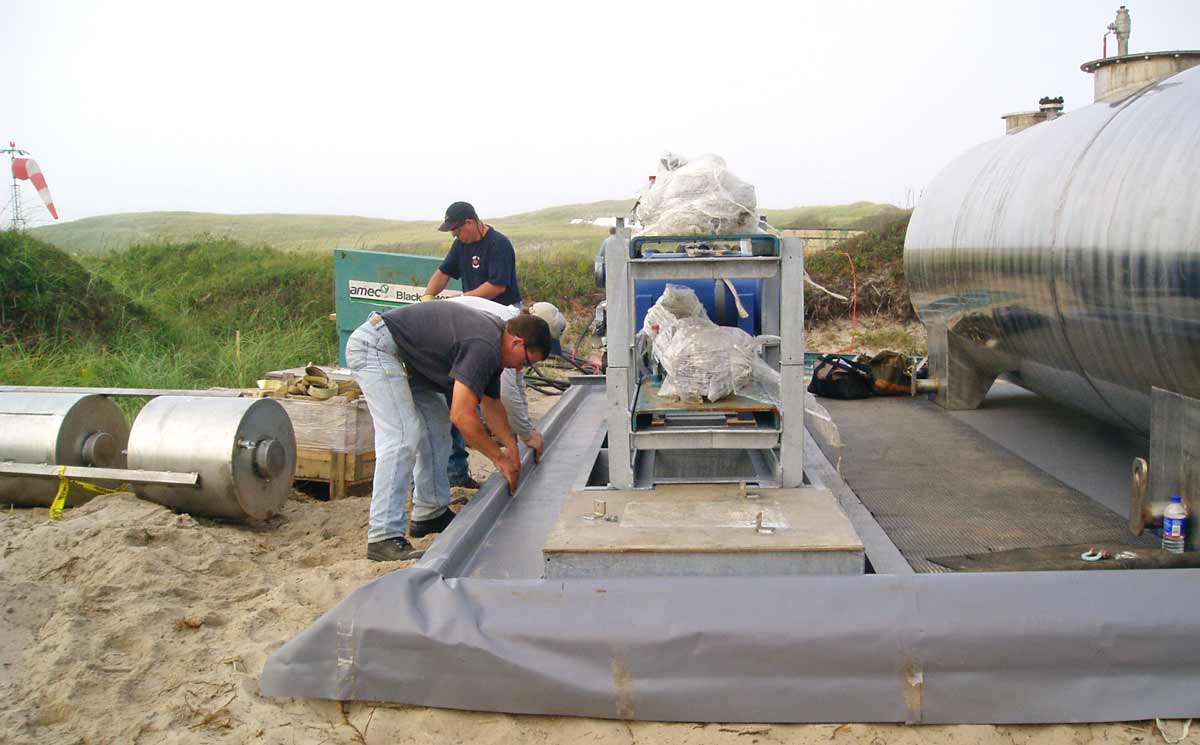 After all the storage and pumping equipment had been placed on the foundation, the spill containment berm was completed by gluing the fabric over a raised lip along the perimeter of the foundation. This containment was designed to catch minor spills from hoses or valves. 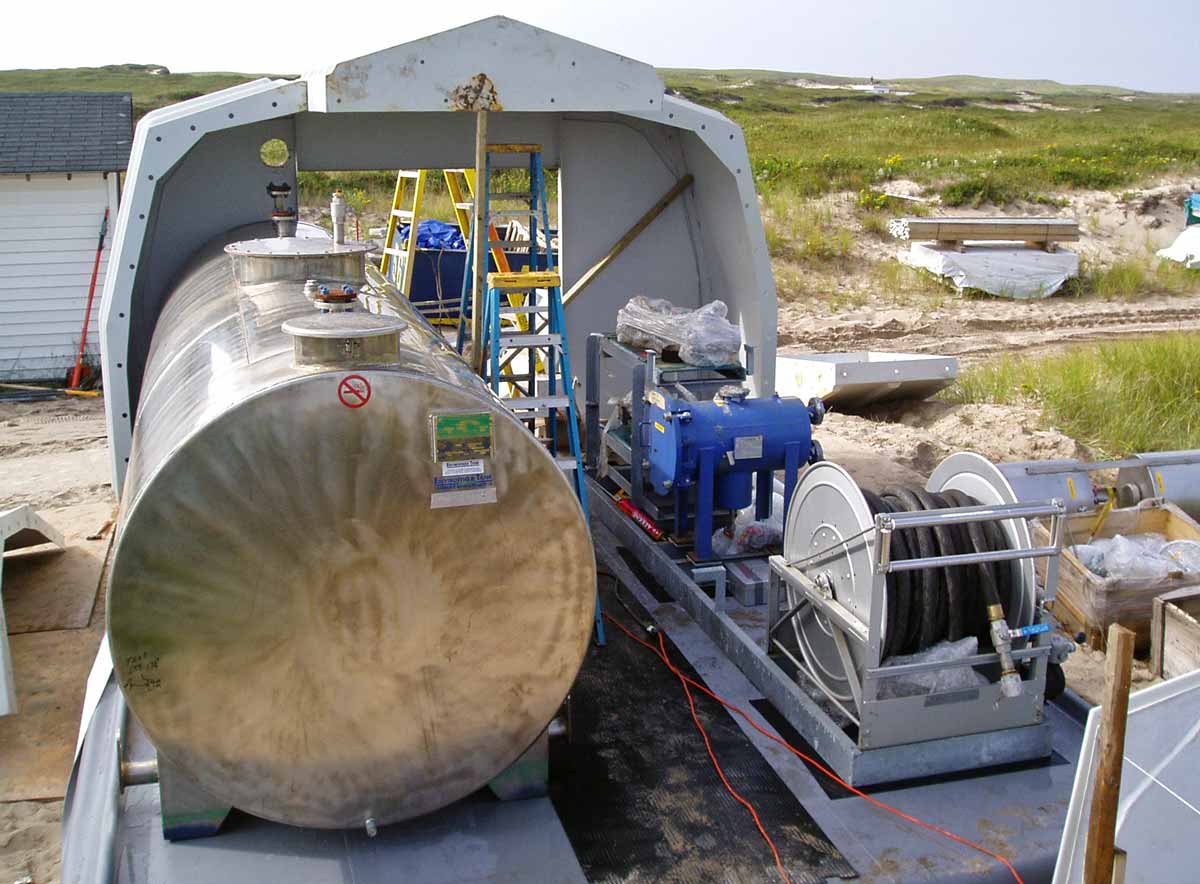 A view of the front of the refuelling facility with all equipment placed, secured, and ready for assembly of the housing. 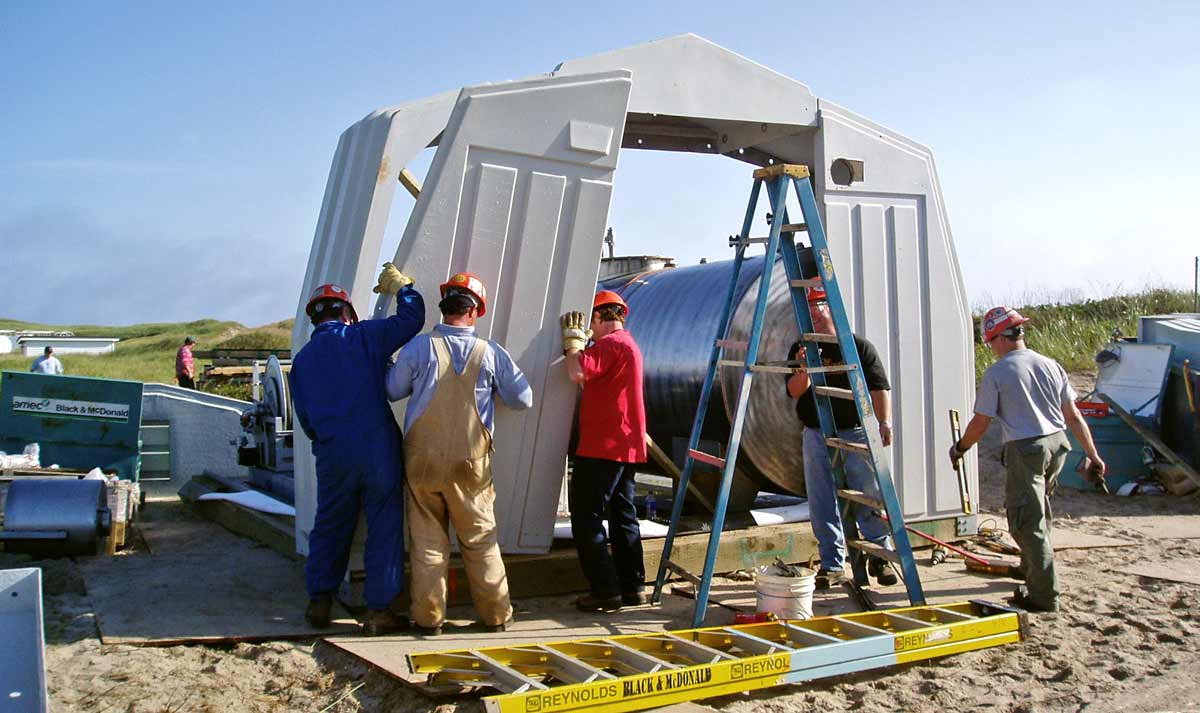 The housing of the refuelling facility is comprised of 16 prefabricated fibreglass sections which were fastened together with glue and stainless steel bolts. Caulking provided additional weather-proofing of the seams. The building was designed to handle wind speeds of 104 knots (193 kph). 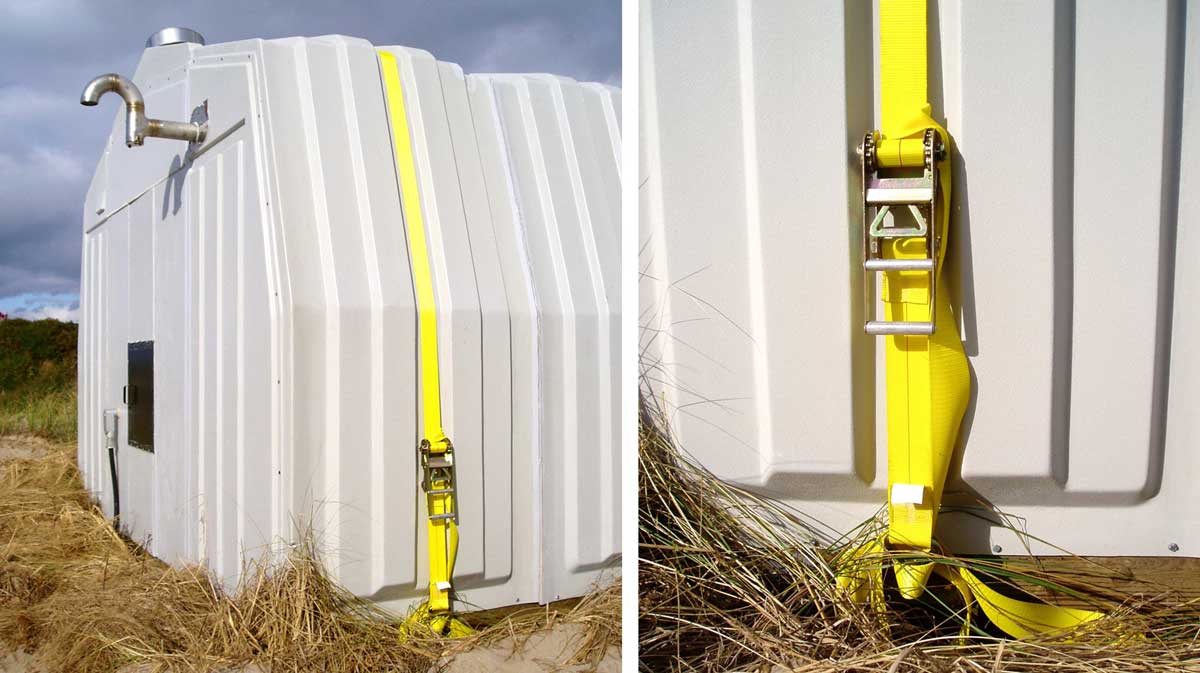 Once the assembled housing was bolted to the wooden foundation, custom-made nylon ratchet straps were fastened to the foundation and wrapped over the top of the unit to provide additional security. 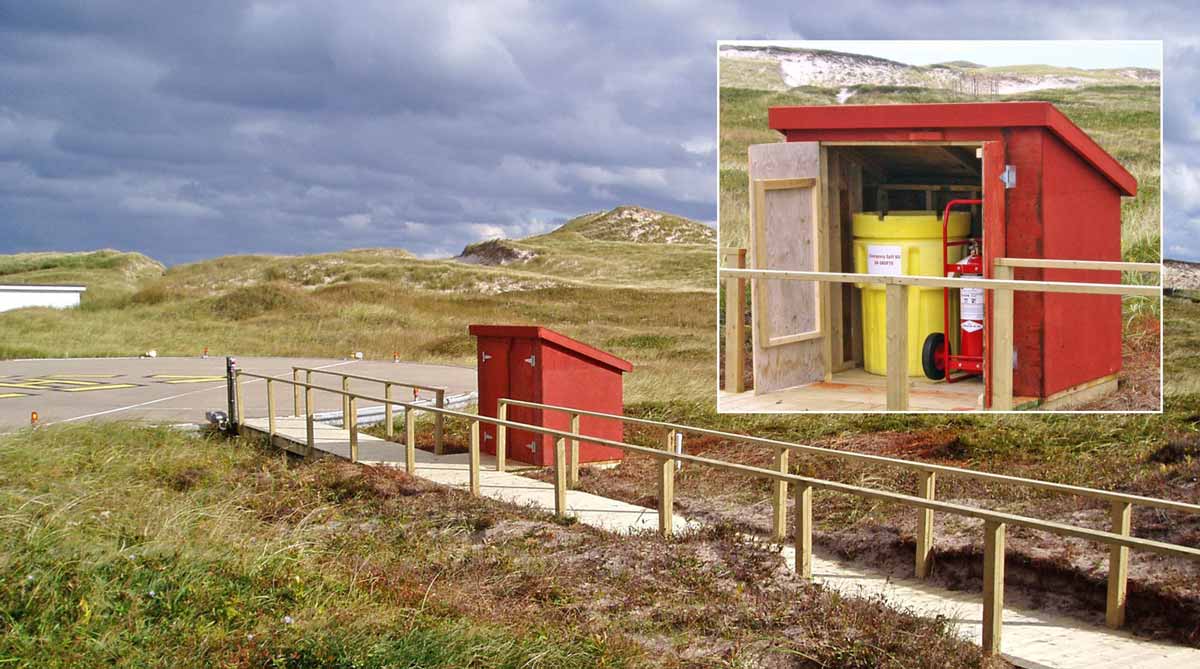 In the meantime, a wooden walkway and railing between the helipad and the refuelling facility was constructed by station staff. Electrical cables were laid under the walkway, and an emergency shut off switch was installed at the edge of the helipad. A small hut along the walkway contained easily accessible spill clean-up materials and a fire extinguisher. 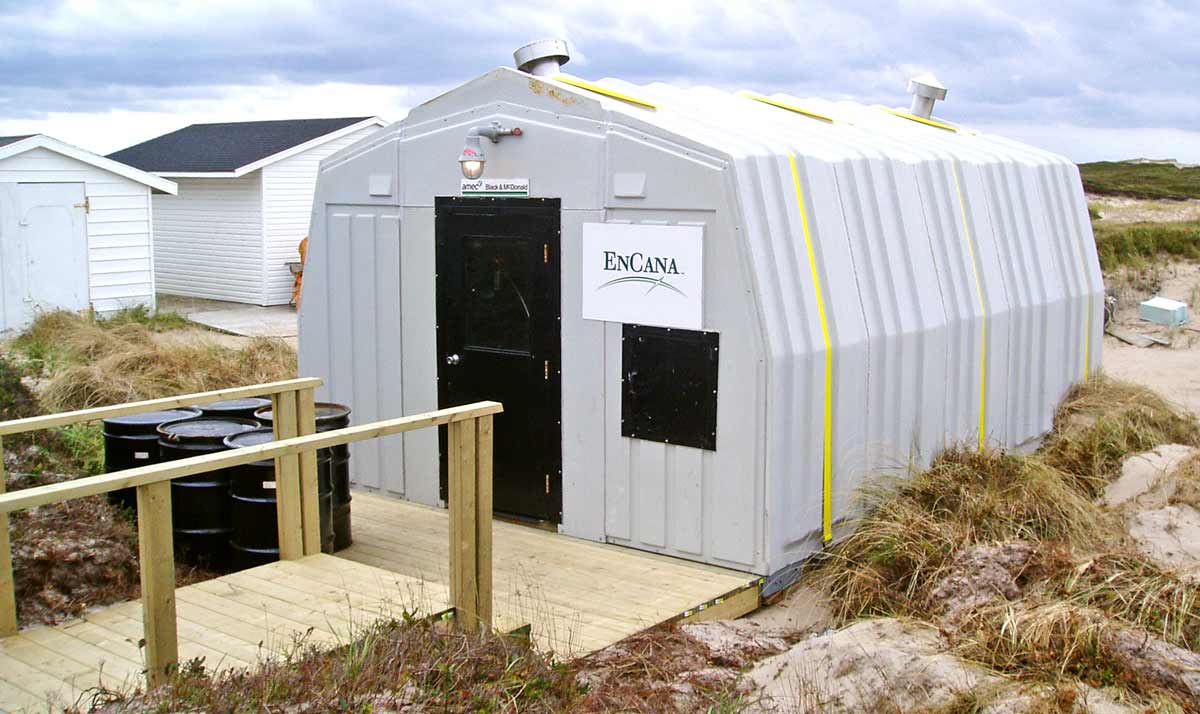 The front of the refuelling facility, facing the helipad. The black hatch door next to the entrance provides access to the hose.

A view from the southwest of the back of the facility. The unit has a floor area of 26 sq m and is 5 m high.

On September 17, tank, pipe and hose connections and valves were checked and a small quantity of fuel was used to commission the system. On the 18th, the industry’s S-61 helicopter returned to Sable Island to transport Jet A-1 helicopter fuel from the vessel offshore. Fuel was carried in a bladder holding about 2000 litres.

The bladder was a collapsible round container constructed of high strength urethane-coated nylon fabric, suspended in nylon straps within an aluminium cradle. These bladders were specifically designed, and approved by Transport Canada, to carry fuel. Similar but smaller bladders (600 litre capacity) were used by CCG when transporting fuel oil to the Sable Island Station during the annual sealift. 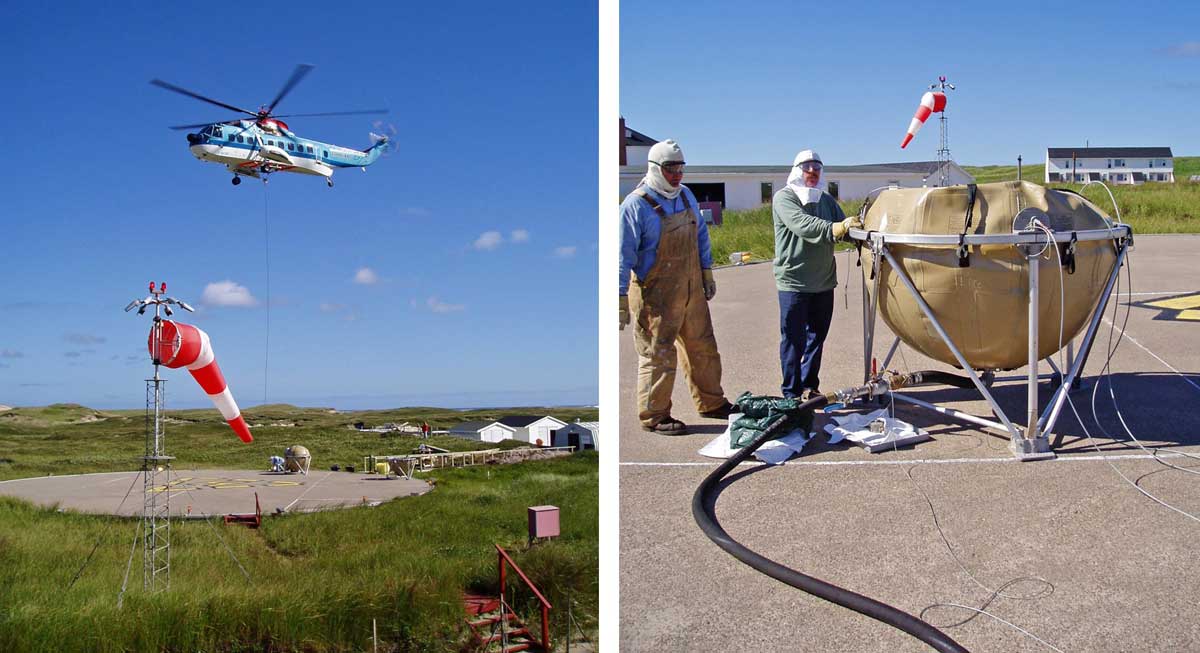 Inside the helicopter refuelling facility. The photo on the right shows the hose reel and the hatch through which the hose was pulled out to the landing pad.

In 2005 EnCana transferred responsibility for operation and management of the facility to CCG.

CCG routinely refuelled at the facility during the annual sealift when helicopters were used to sling equipment and supplies to the island from the Coast Guard vessel anchored offshore. CCG helicopters also provided support for servicing the navigational aids on the island, and for the seal research program conducted by Fisheries and Oceans Canada. 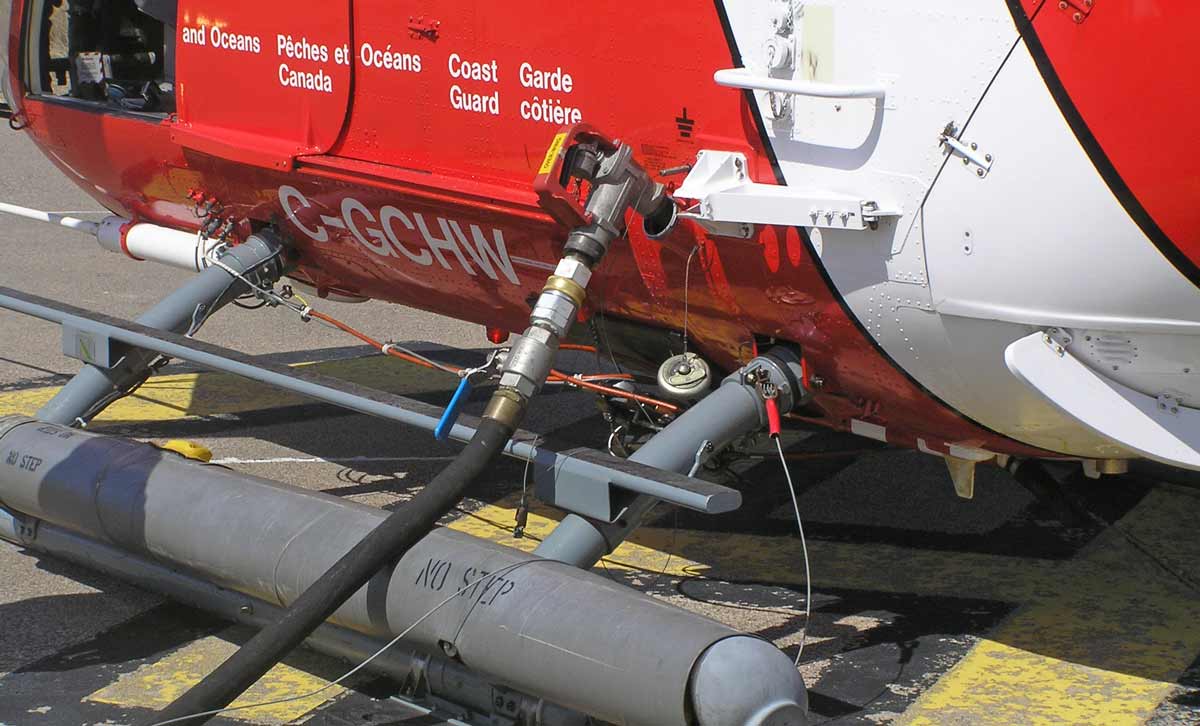 Preparing to refuel a CCG helicopter on the primary landing pad adjacent to the Sable Island Station. 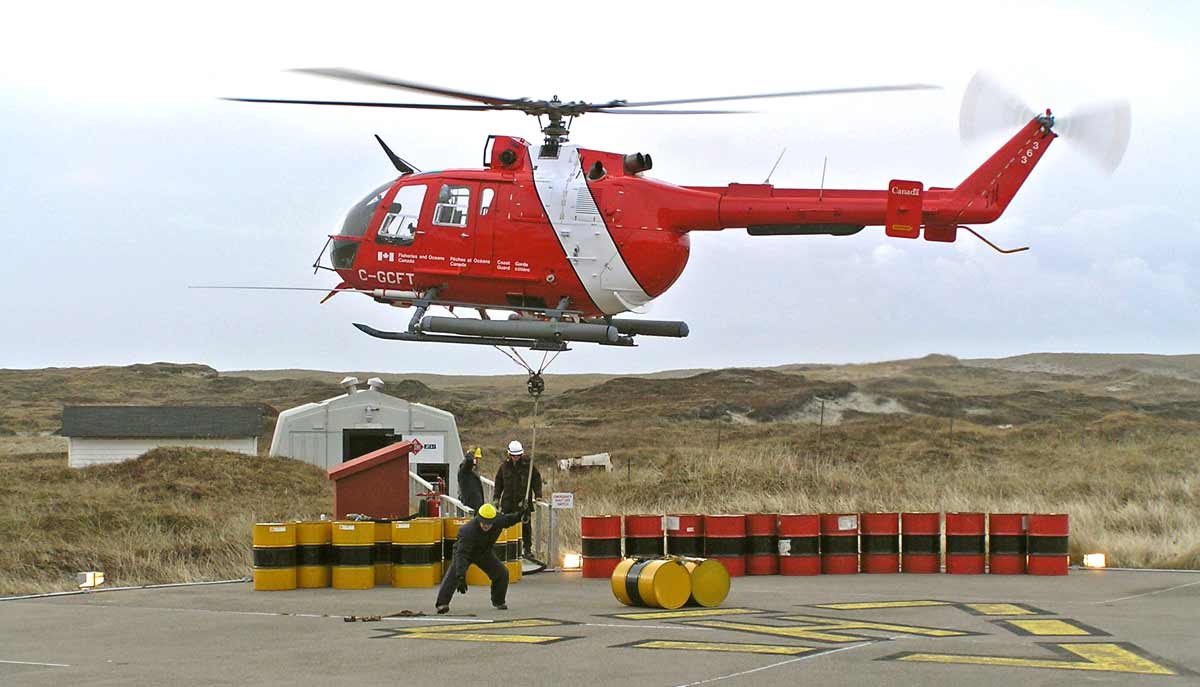 During the years that the facility was maintained by CCG, the storage tank was filled from drums slung to the island by helicopter from a Coast Guard vessel anchored off the north side of the island. Other operators, including the offshore energy industry and DND, continued to use the facility.

In June 2008, a Search and Rescue (SAR) helicopter stopped on the island to refuel. The CH-149 Cormorant is a long range helicopter (>1000 km), and being able to refuel on Sable Island or at the offshore energy platforms greatly increased the search area it could cover.

At this time there was a tern nesting colony south of the Sable Island Station but there were no nests in or around the station and landing pad area. More recently, the expansion of the tern colony has been an issue for operations at the primary landing pad during the May-July nesting season. 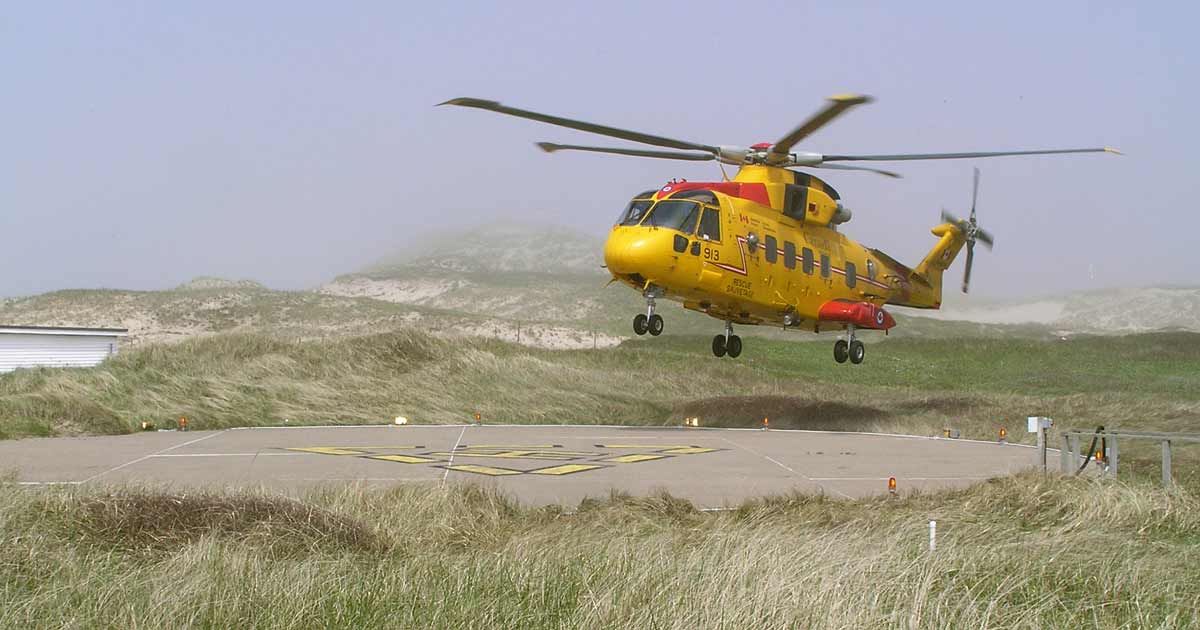 There was a thin fog drifting over the dunes. 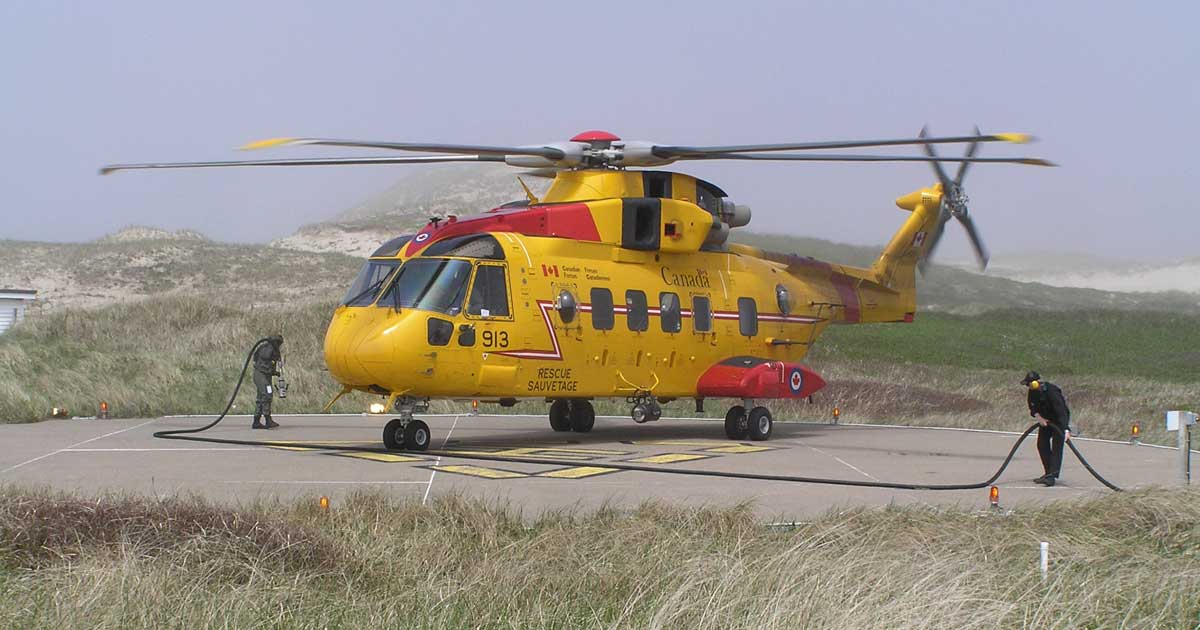 With station personnel assisting, a member of the flight crew hauled the hose to the fuel filler on the starboard side of the helicopter. 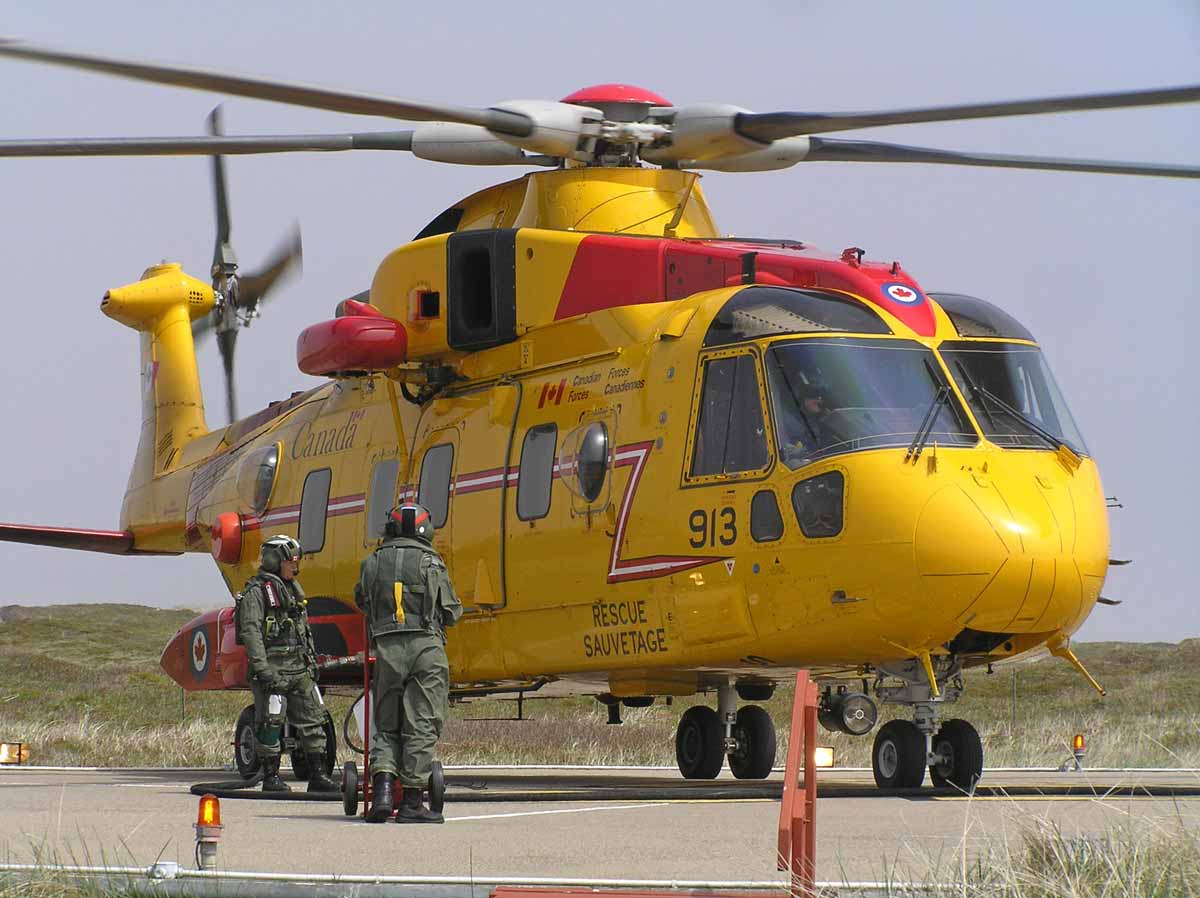 Two of the helicopter crew – one filling the tank, and the other standing by with the fire extinguisher. The SAR helicopter did not shut down while fuelling. 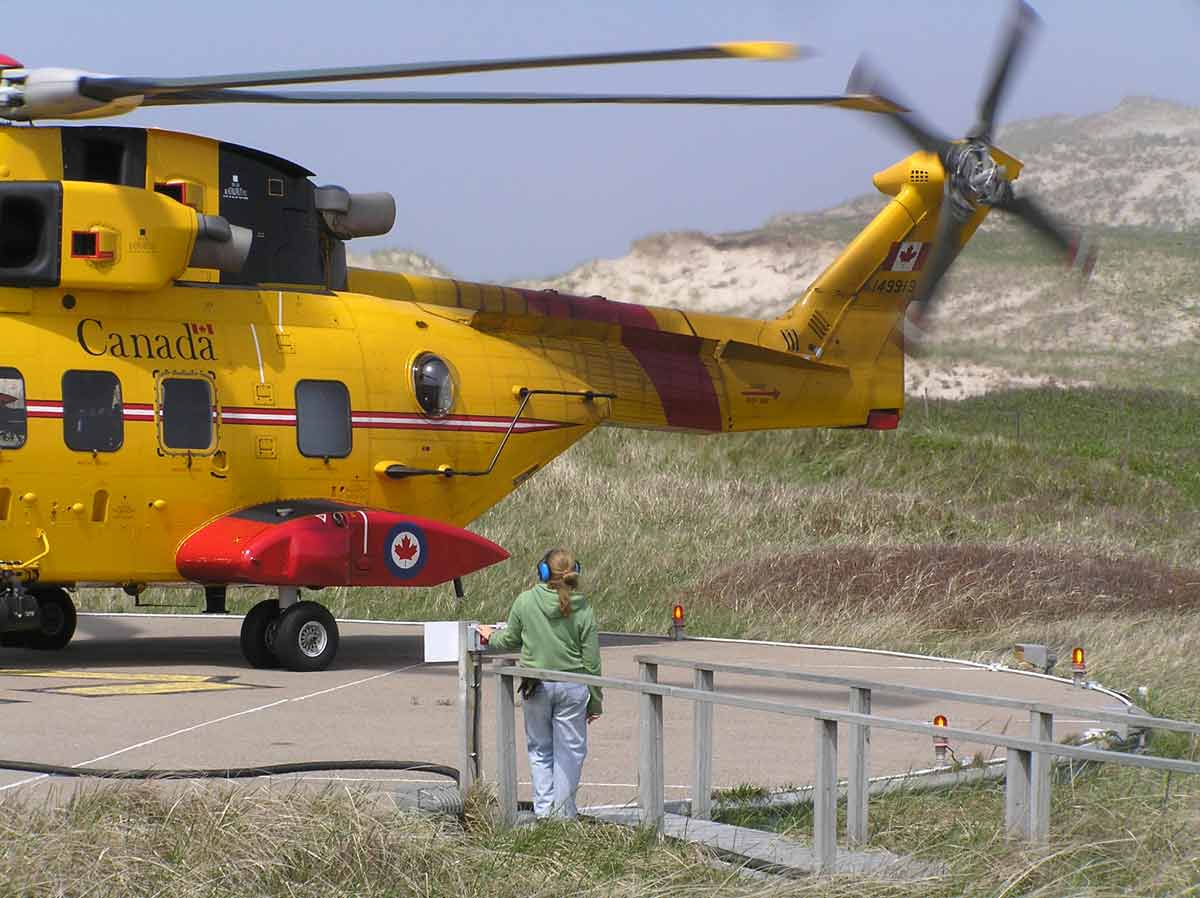 At the edge of the pad, Gina Little (MSC staff) stands with her hand at the emergency shut off switch, watchful and ready for any sign of difficulties. 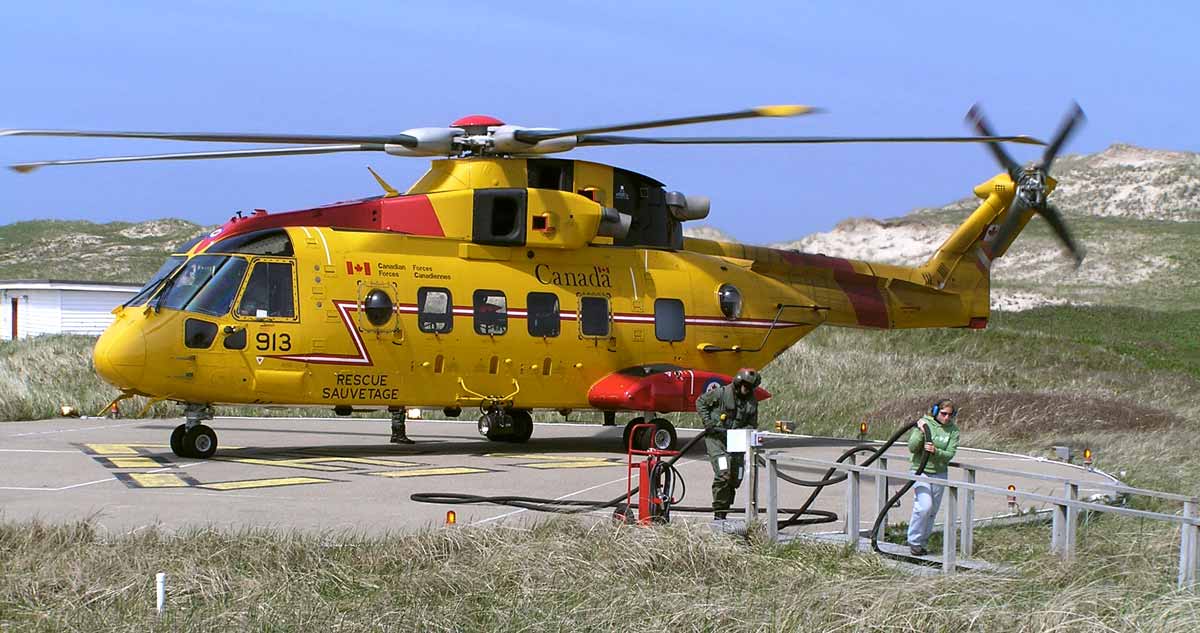 Gina assists with hauling the hose as it is reeled back into the facility.

Use of the Refuelling Facility Discontinued

Following the establishment of the Sable Island National Park Reserve, the helicopter refuelling facility was no longer maintained. Parks Canada uses 205 litre drums for fuel storage. However, recent news reports indicate that, with the offshore energy platforms no longer in the Sable area, the Royal Canadian Air Force (RCAF) may be interested in re-establishing refuelling capacity on the island for its SAR helicopters. 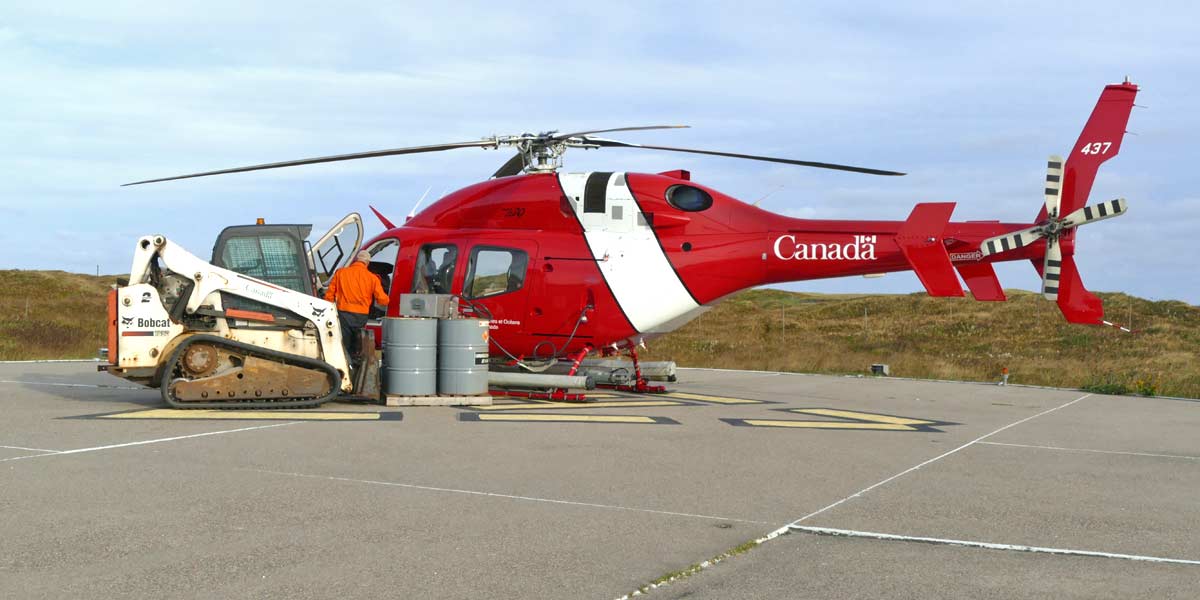 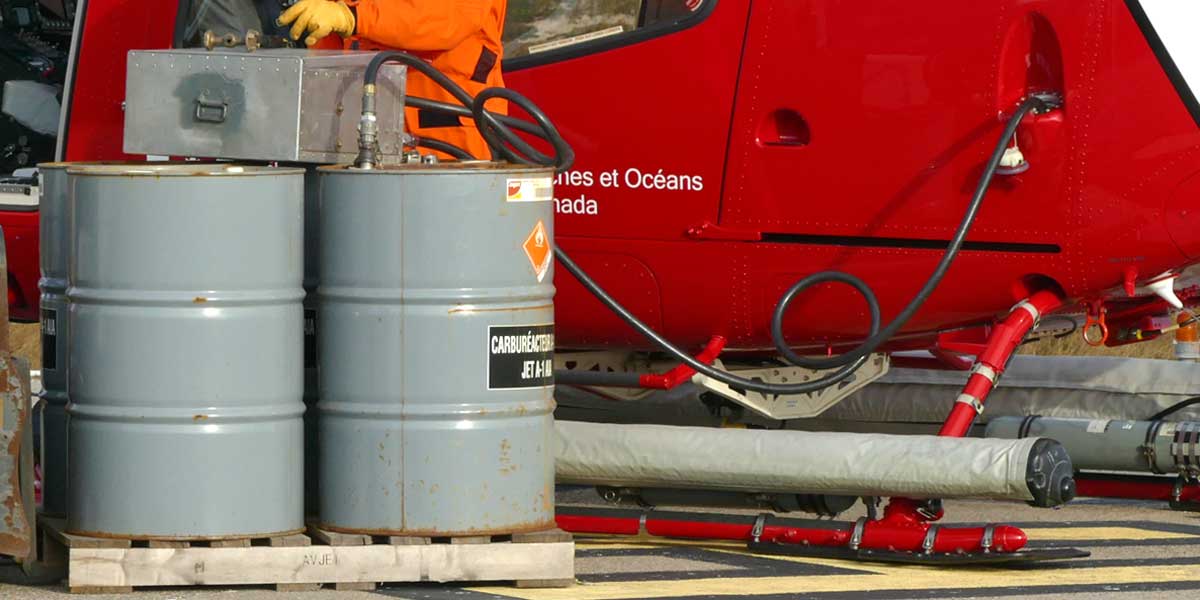 A CCG helicopter refuelling from drums on the primary helipad. The four drums were delivered to the landing pad by Parks Canada personnel.

Since 1801, when the life-saving service – the Sable Island Humane Establishment – was set up, the island has provided safety and shelter for shipwreck victims and lost dorymen. Also, during the past six decades, the island infrastructure served as an alternate and/or emergency landing platform for helicopters operating in the region, including Search and Rescue and the offshore energy industry.

However, the last of the industry’s platforms left the Sable region in November 2020. So there are no longer industry helicopters operating in the area, and SAR helicopters no longer have the option of refuelling on the platforms. 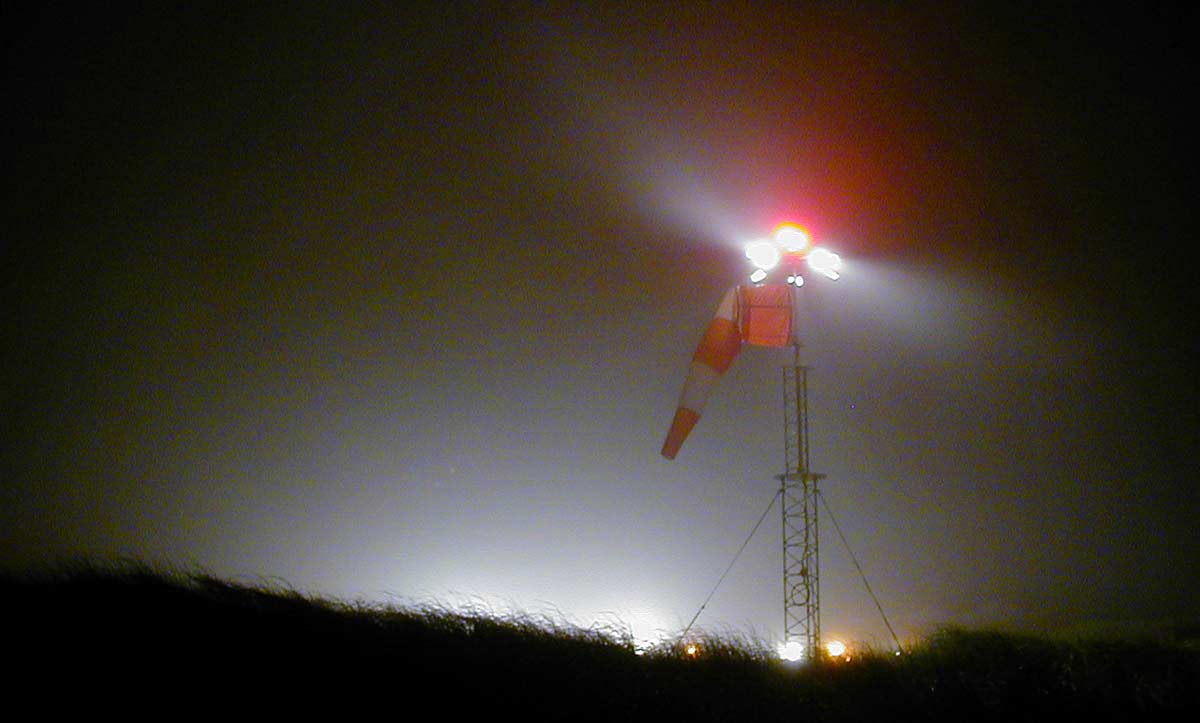 The glow of the emergency lighting at the helicopter landing pad adjacent to the Sable Island Station. 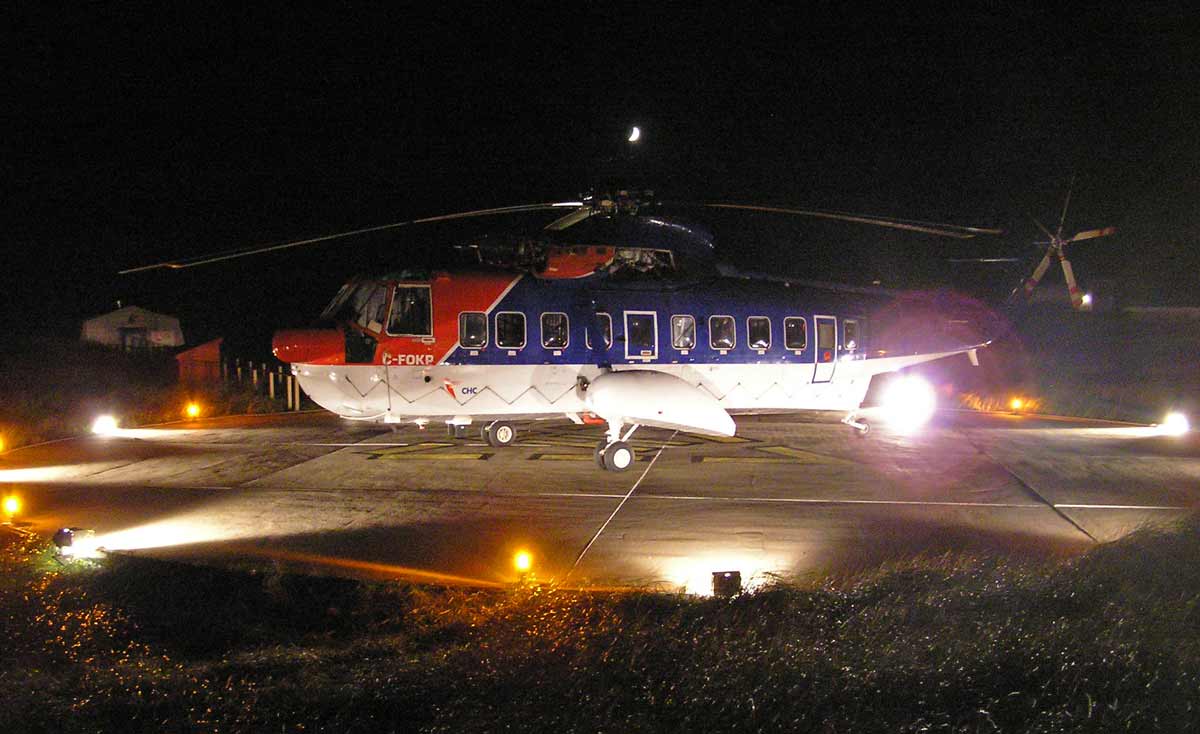 An offshore energy industry helicopter parked on the helipad following an emergency landing.

In late September 2006, the Officer-in-Charge at the Sable Island Station received a call advising him that a helicopter en route to Halifax had changed course and was heading towards the island to make an emergency landing.

It was nighttime. Shortly after the helicopter had taken off from the offshore platform, there was an engine oil warning. Not able to return to the platform, the aircraft flew through the dark towards the island.

In the meantime, on the island, the helipad’s emergency lighting was turned on, spill containment materials and fire extinguishers were readied, and station staff prepared for the arrival of the flight crew and passengers.

The helicopter landed safely, and the shaky and relieved passengers were escorted to the accommodations building. The passengers had known that ditching was a possibility. As they disembarked and walked away from the helicopter, some described how they felt when, during the tense flight through the night over the dark ocean, they caught a first glimpse of the lights of the Sable Island Station in the distance…  safe haven.

A plate screwed to the concrete near the edge of the primary landing pad near the Sable Island Station. 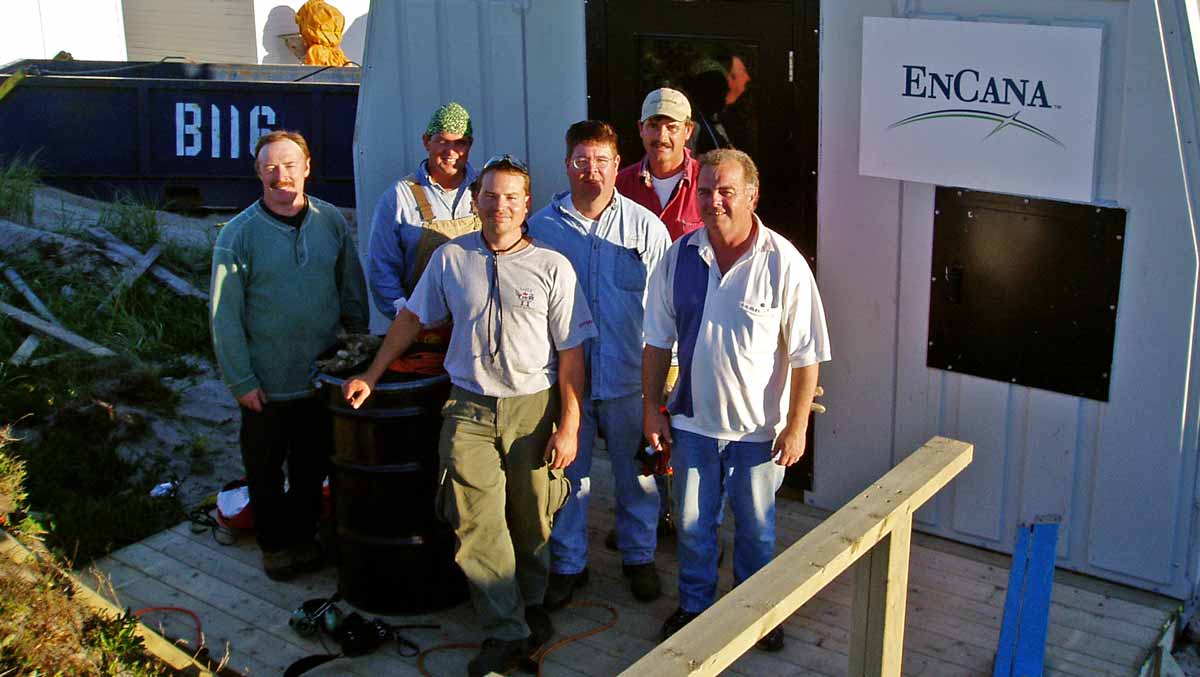 An earlier version of this article was published in October 2003 in the website (no longer active) of the Friends of the Green Horse Society.