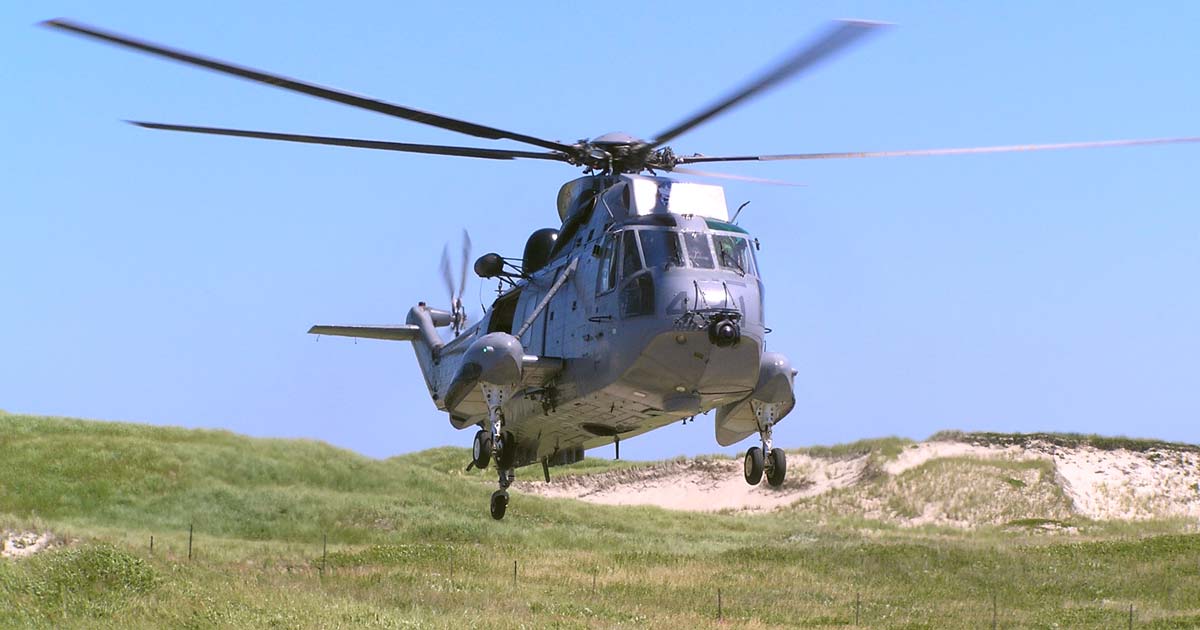 Above: On August 8th, 2005, a Sea King helicopter (Talon 421) brought a three-person Explosive Ordnance Disposal (EOD) team to Sable Island to dispose of a few years worth of Marine Location Markers (MLMs) found on the beach.

* This article was published in the Green Horse Society’s website in August 2005. 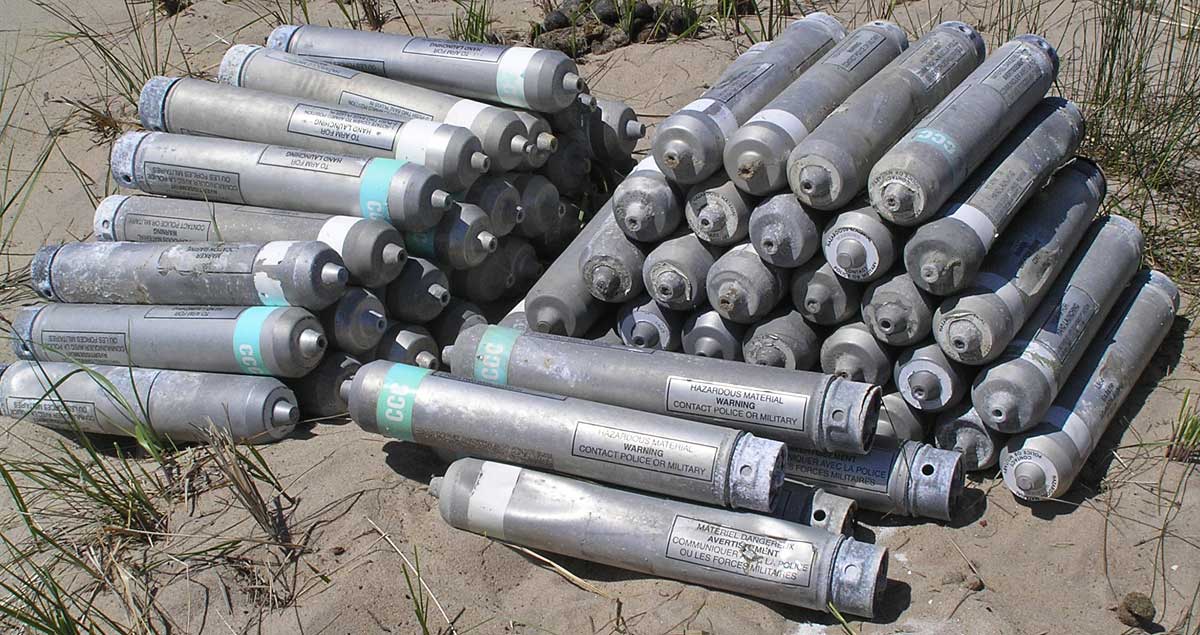 MLMs are used by the Canadian military to provide a smoke reference-point on the ocean’s surface. In addition to their potential use in antisubmarine warfare, MLMs are deployed during search-&-rescue operations, and man-overboard events, and are used as targets for naval exercises.

When successfully deployed, an MLM produces a high intensity yellow flame and white smoke for about 15 to 20 minutes, and then the metal canister sinks and degrades. The MLM body is made of aluminium which corrodes rapidly in salt water. In the photo below, the intact plugs near the base of three of the MLMs indicate that they are duds or misfires. If an MLM fails to fire or is prematurely extinguished, it can float and eventually wash ashore. Most dud/misfire MLMs found on the beach are likely to contain all, or some portion, of their original chemicals, and can be dangerous if mishandled. 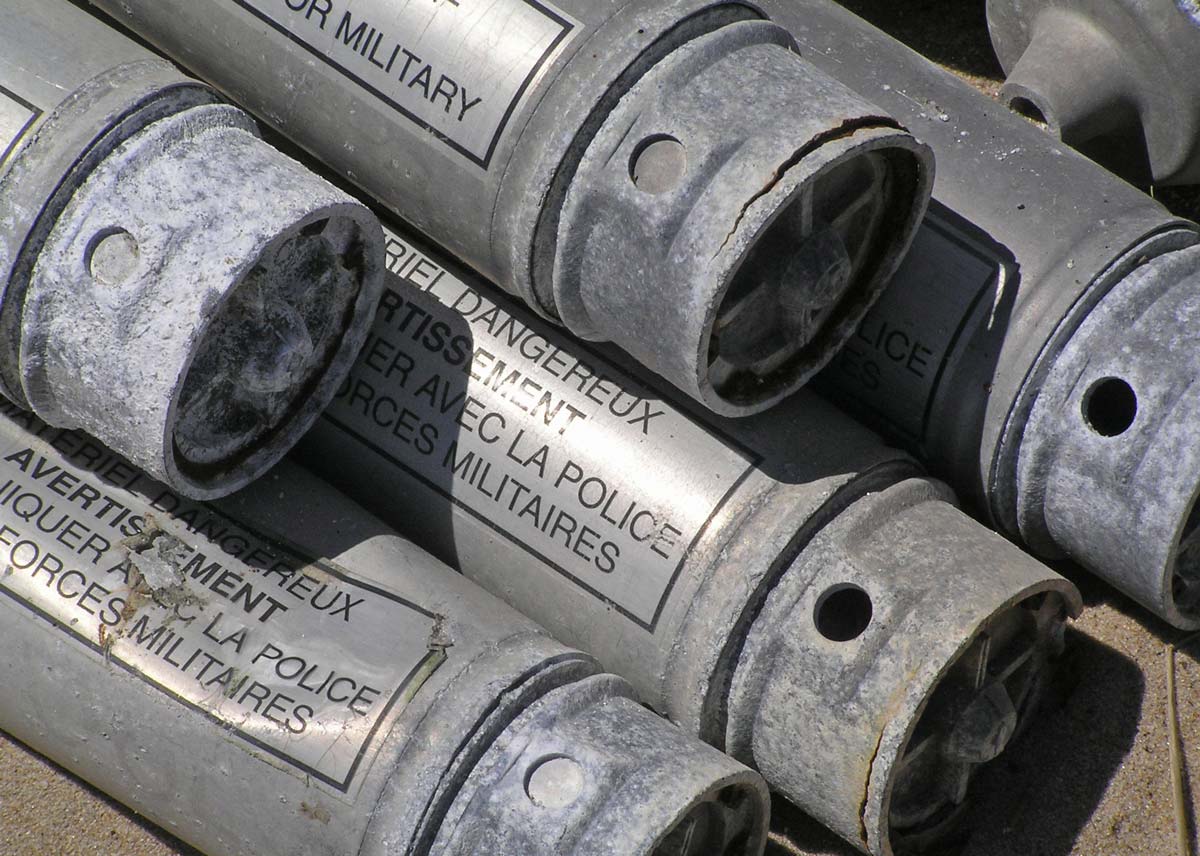 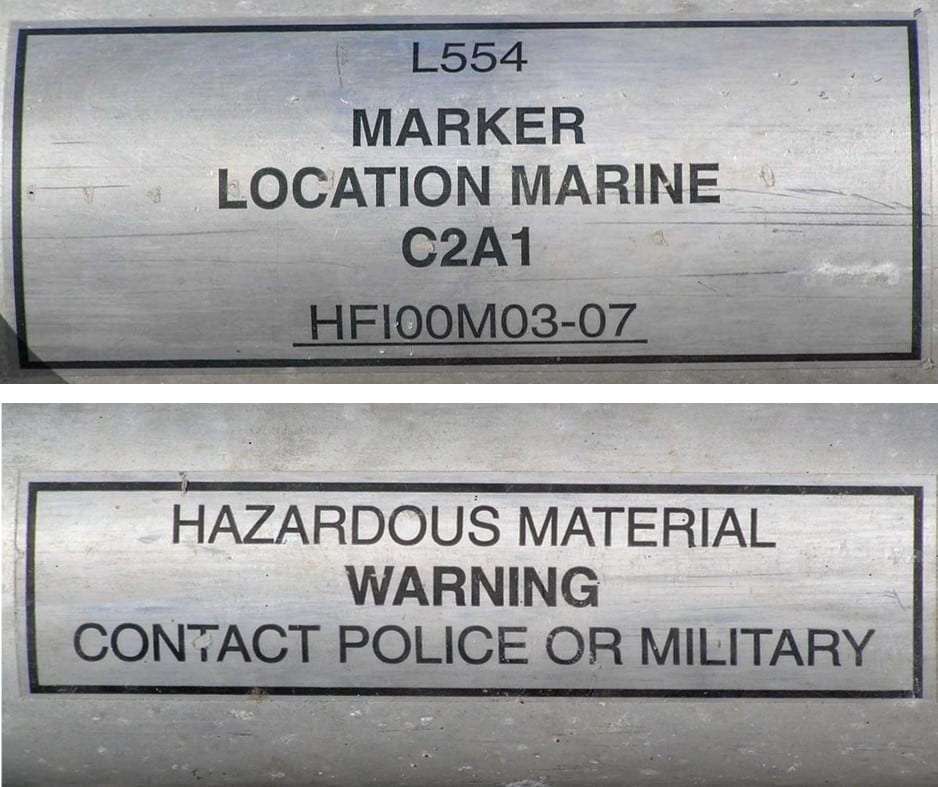 Identification and warning labels on the MLM.

The hazardous chemicals in MLMs are red phosphorus, white phosphorus and magnesium dioxide. Phosphorus ignites when it comes into contact with air, so even small amounts on skin can cause serious burns. Residual phosphorus inside a beach-cast MLM can ignite producing flame and toxic smoke. Ignition can also cause metal components and fragments to eject, thus presenting a projectile hazard.

In August 2005, an EOD team—Explosive Ordnance Disposal, Fleet Diving Unit (Atlantic)—arrived on Sable Island to deal with the beached MLMs. The team—Petty Officer Keith Musselman, Master Seaman Hugo Thorne, and Leading Seaman Kenny Jones—is based at the Canadian Forces Base Shearwater, near Dartmouth, Nova Scotia. To reduce risk, the MLMs were destroyed on the island rather than being transported to the mainland for disposal. 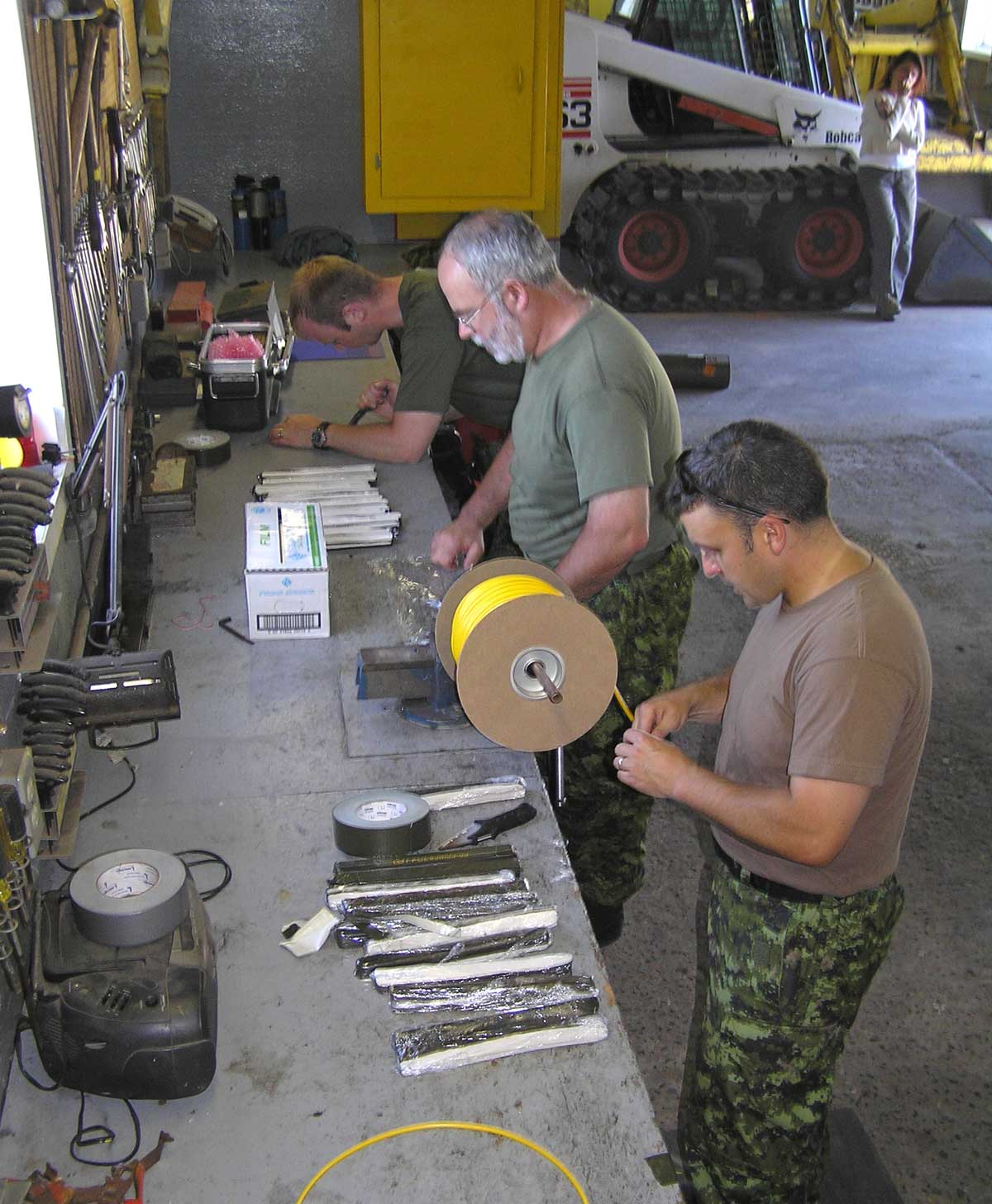 Working in the vehicle garage at the Sable Island Station, the EOD team prepared explosive charges. 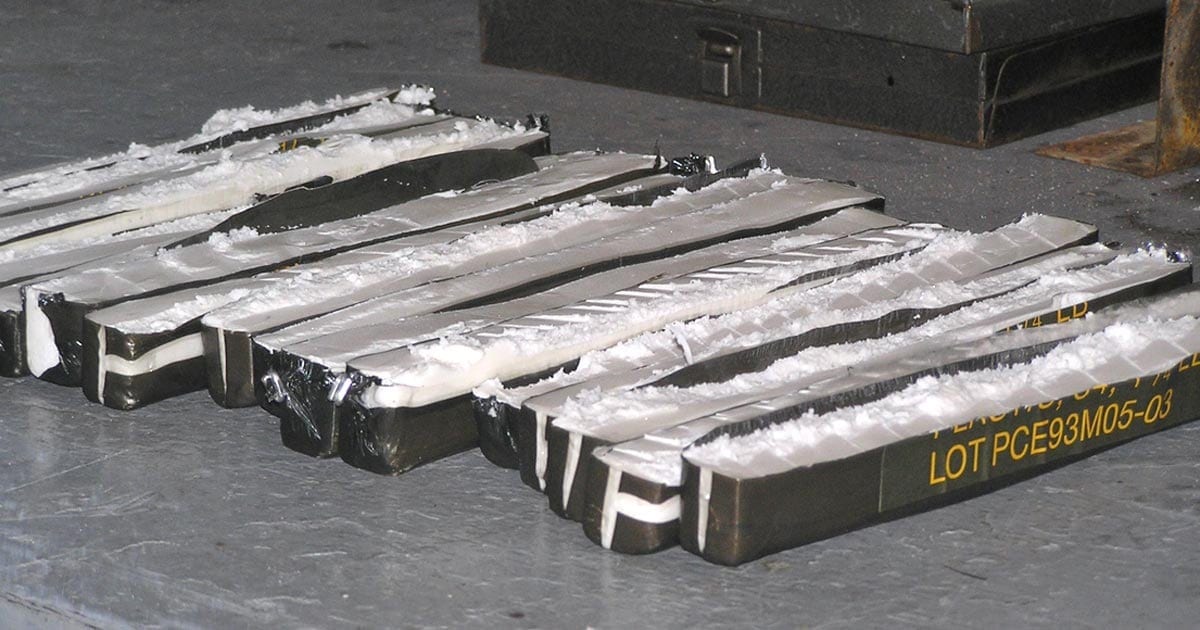 Sticks of C-4 explosive. Each stick was wrapped in plastic film before the detonating cord was attached. 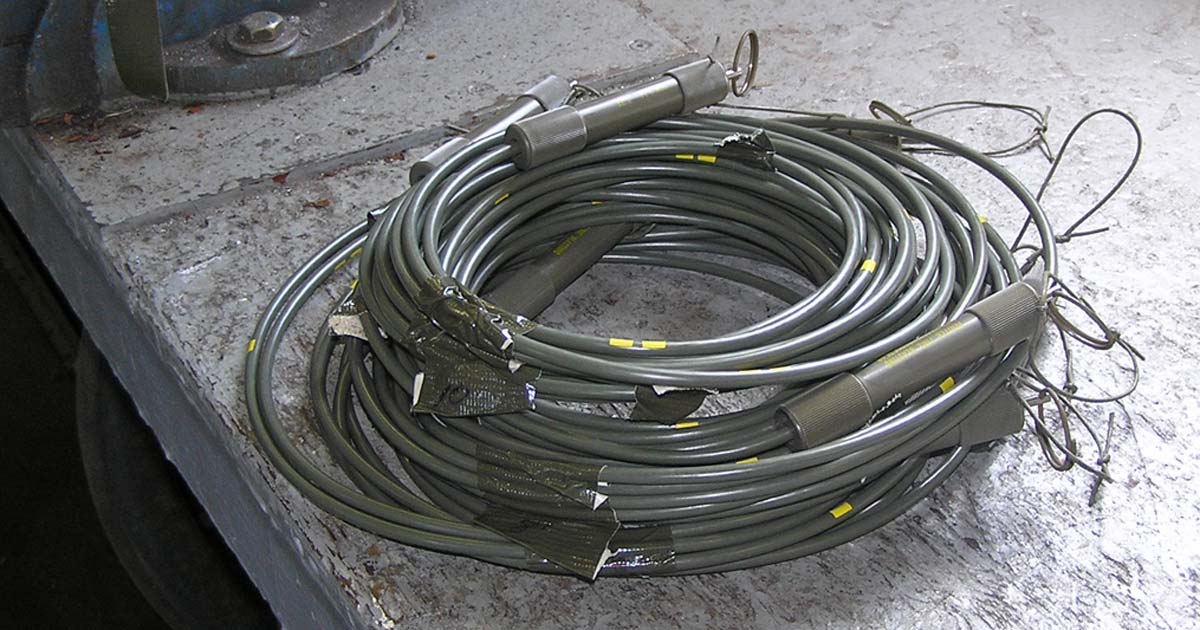 Coils of time fuses. The grey cord is time blasting fuse with a black powder (“gunpowder”) core—it is designed to burn at a predetermined rate.

A length of fuse is cut to provide the required time delay, and a nonelectric igniter is attached to each fuse. The firing pin in the igniter is pulled back by the operator and the spring tension created thrusts the pin forward with enough force to set off the primer. The primer then ignites the fuse, and the fuse ignites the detonating cord.

About 300 grams of C-4 explosive with a length of yellow detonating cord was prepared for each of the 60 MLMs. C-4 is more stable than dynamite, and produces the extreme heat which is necessary to burn the hazardous materials. The detonating cord contains an explosive core of PETN (pentaerythritol tetranitrate, also known as penthrite). 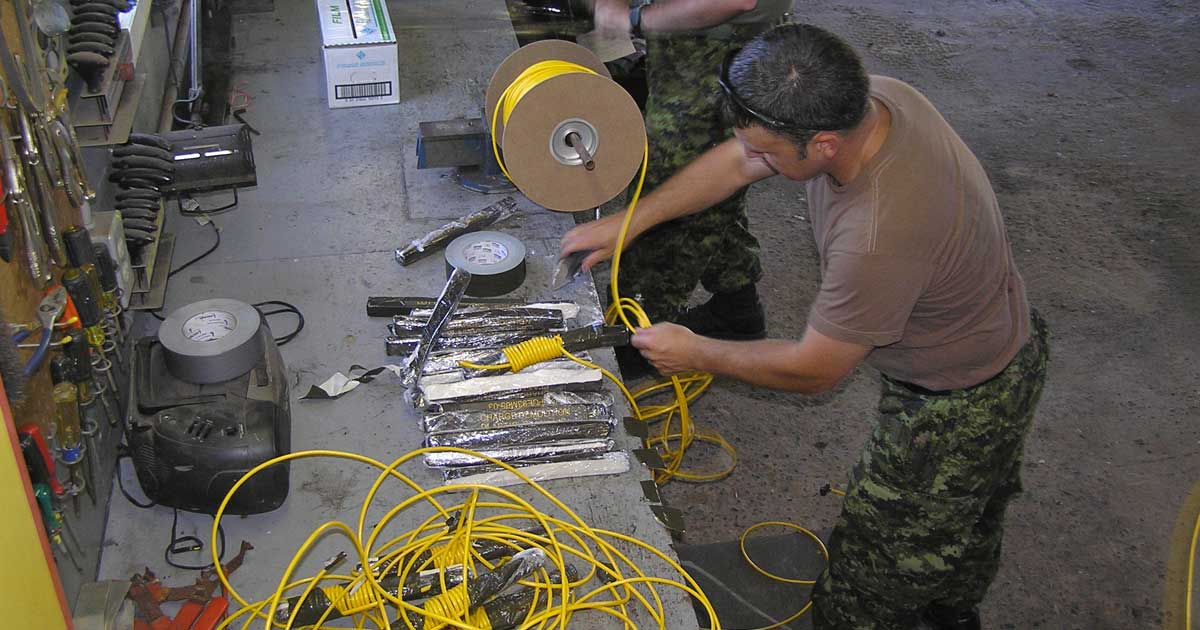 The EOD team conducted the disposal on a wide, flat and sparsely vegetated area of the south beach (a landscape feature known as the Sandy Plain). The location had been surveyed prior to the operation to ensure that no birds, seals or horses were in or near the area. The 60 MLMs were divided into 4 piles placed roughly 100 m apart. 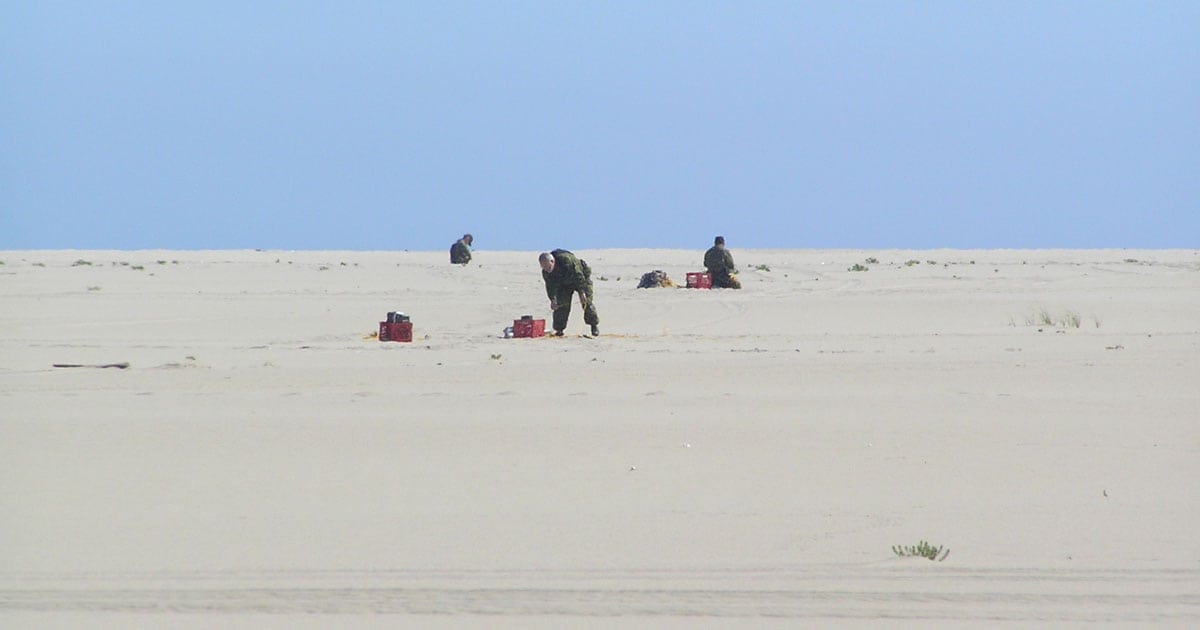 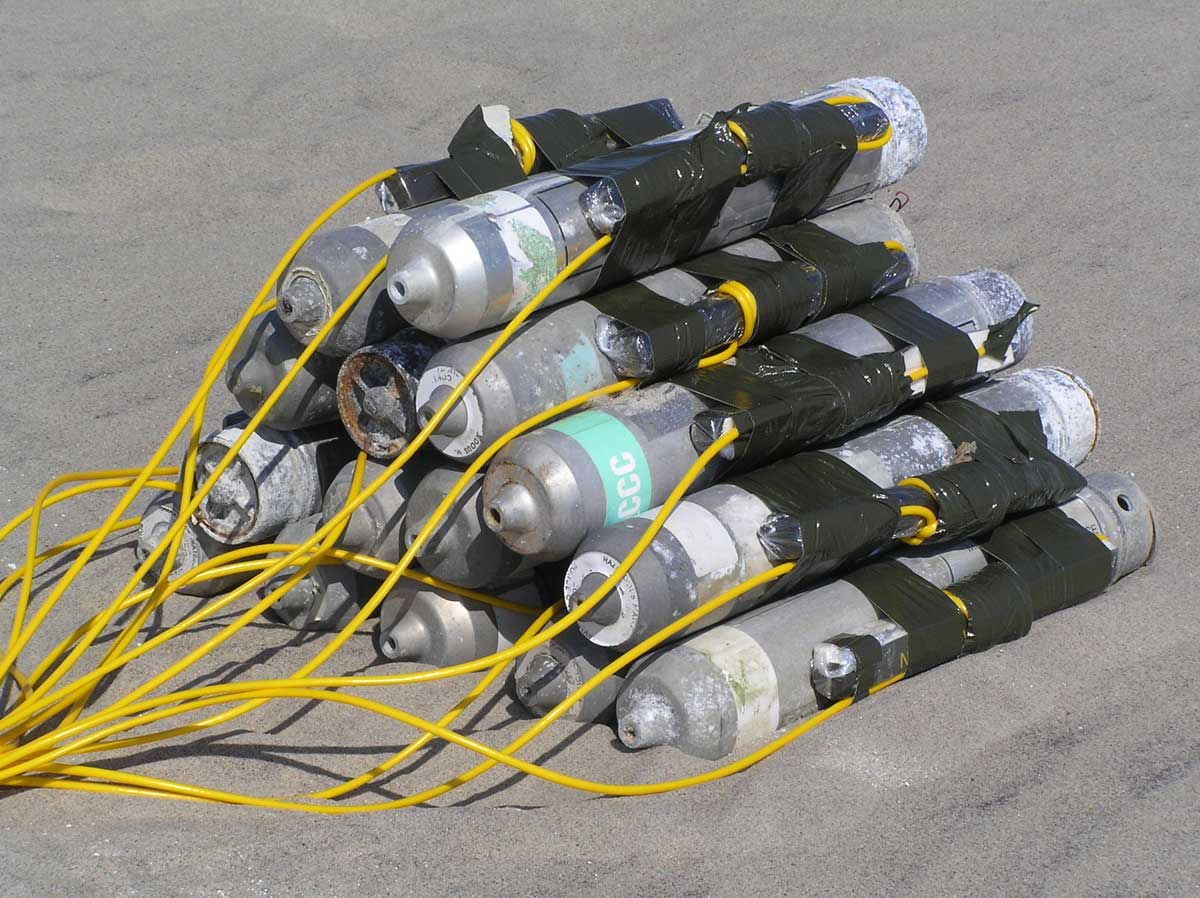 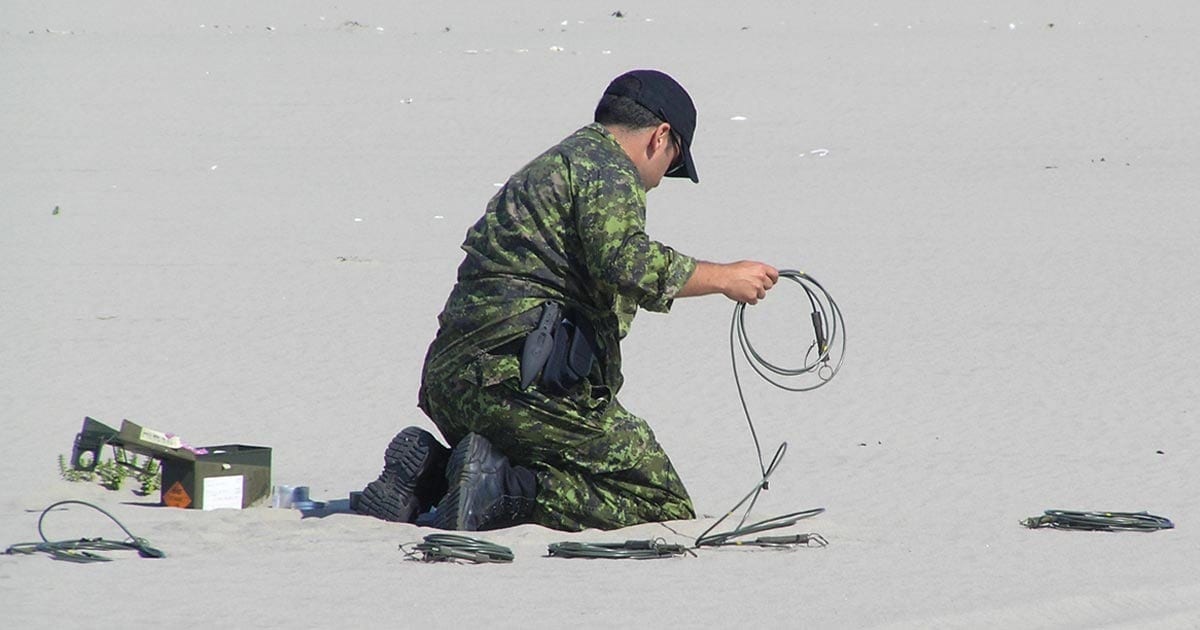 On the beach, Hugo Thorne completed preparation of the time fuses. 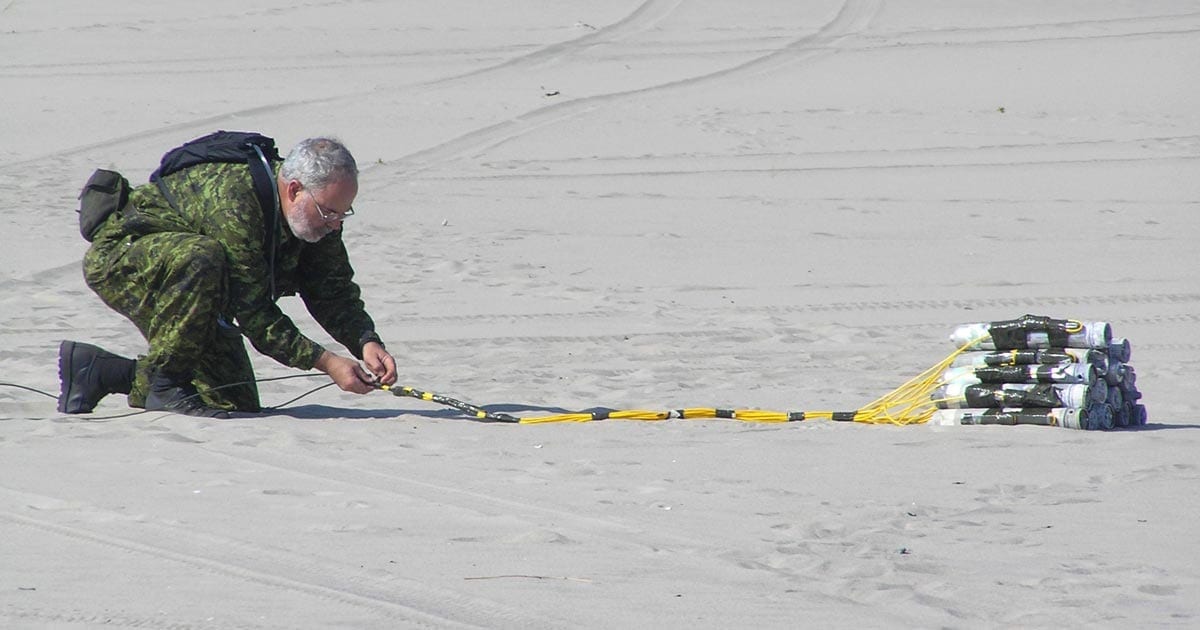 Keith Musselman connected time fuses to the end of each bundle of detonating cords.

Once the time fuses were set at each of the four piles, the EOD team, Sable Island Station personnel and ZL, moved to a safe distance, 1.3 km from the site. Each explosion produced a spray of sand and a billow of smoke. At that distance, the four booms were heard as little more than loud thuds. 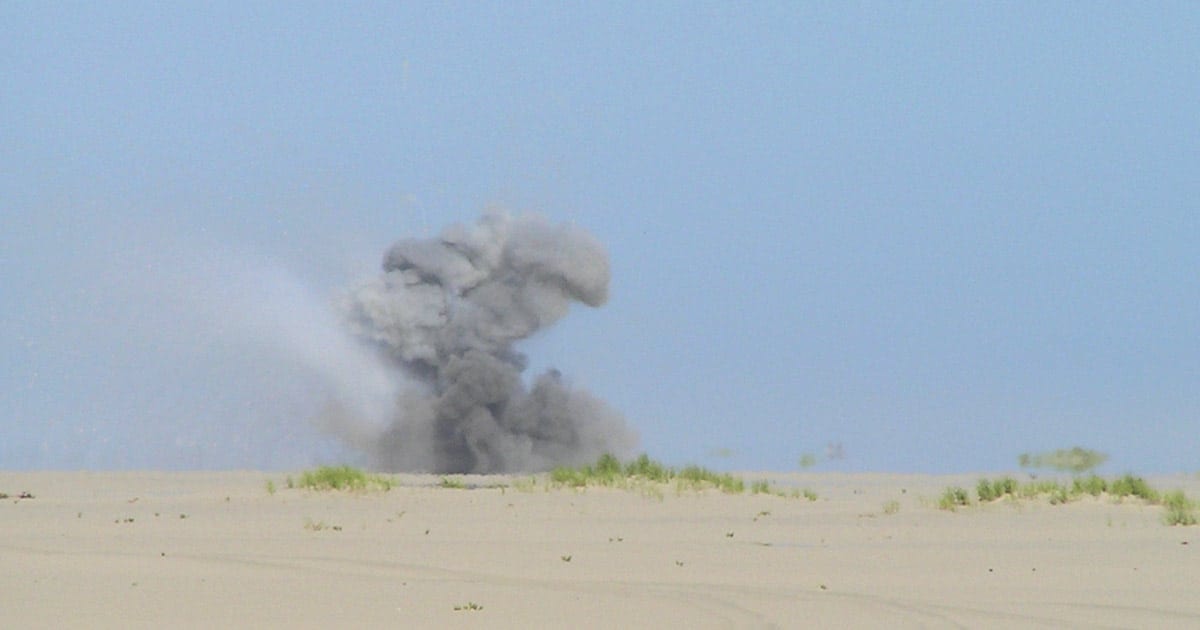 Each explosion produced a shallow crater (roughly 50 cm deep). Following the explosions, the EOD team inspected the four sites—they raked the sand to make sure no unburned chunks of phosphorus remained, and they collected fragments of metal that had survived the explosion. The fine white powder is mostly residue of the burned aluminium MLM canisters. 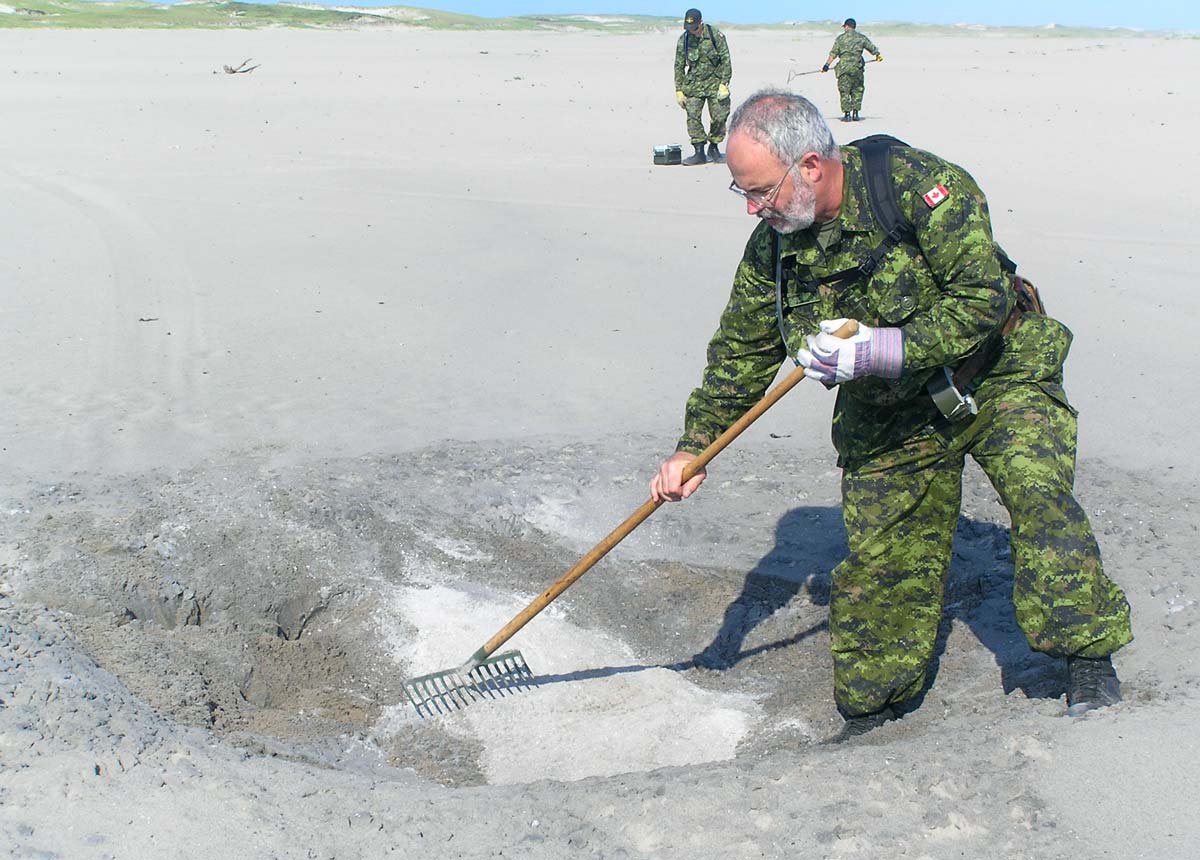 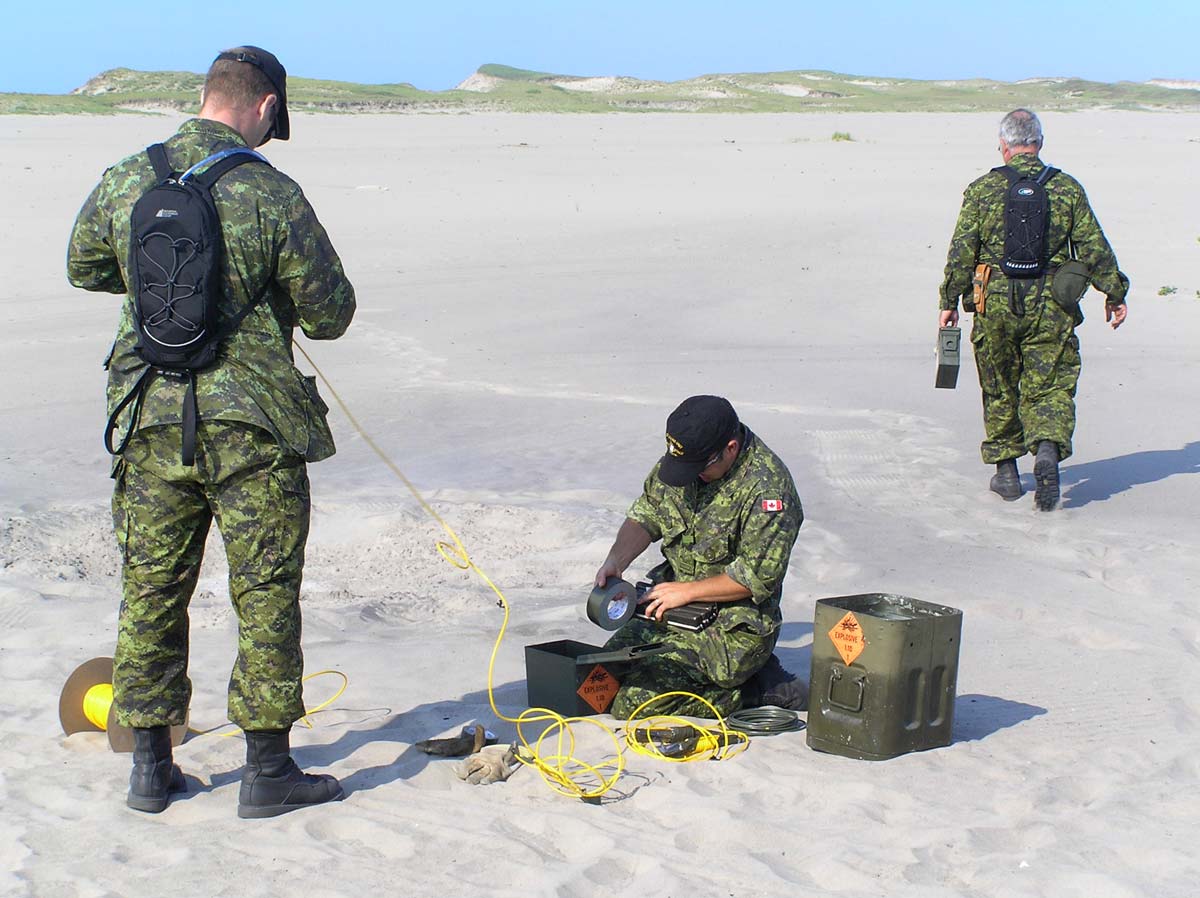 After checking the four disposal sites, Kenny Jones and Hugo Thorne prepared for one last explosion.

The EOD team brought enough C-4 to Sable Island to conduct follow-up explosions for any hazardous MLM materials that survived the first series. However, the extra C-4, about 5 kg, was not needed. To avoid transporting the remaining C-4 back to the mainland by helicopter, the material was destroyed on the island. 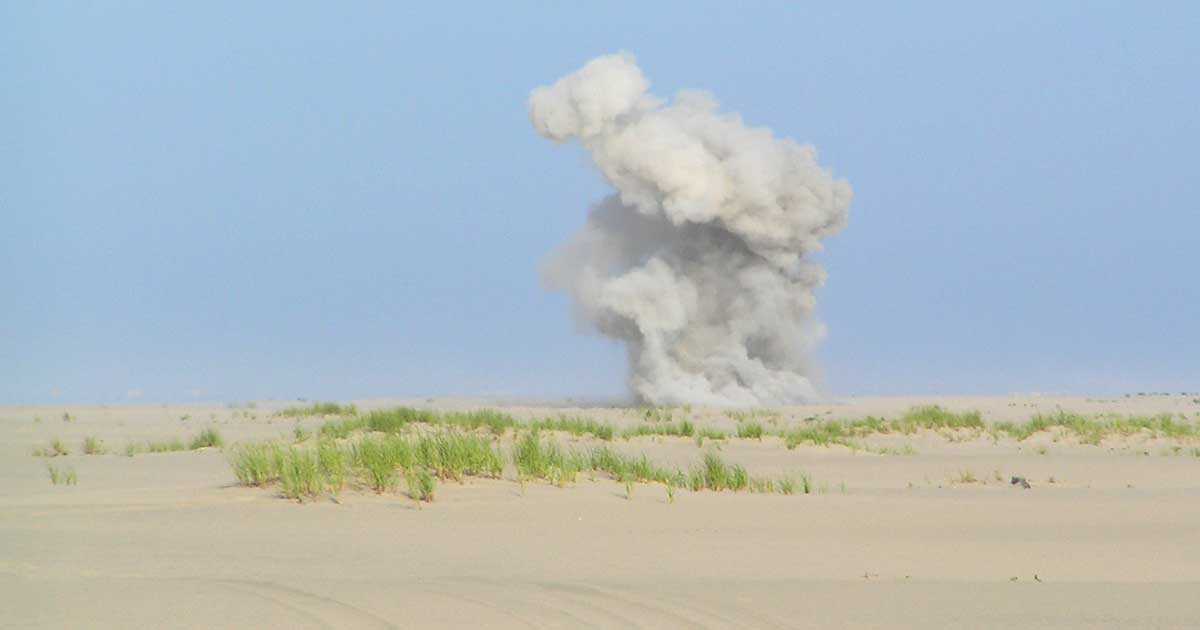 A plume of whitish smoke from the detonation of the excess C-4 explosive. 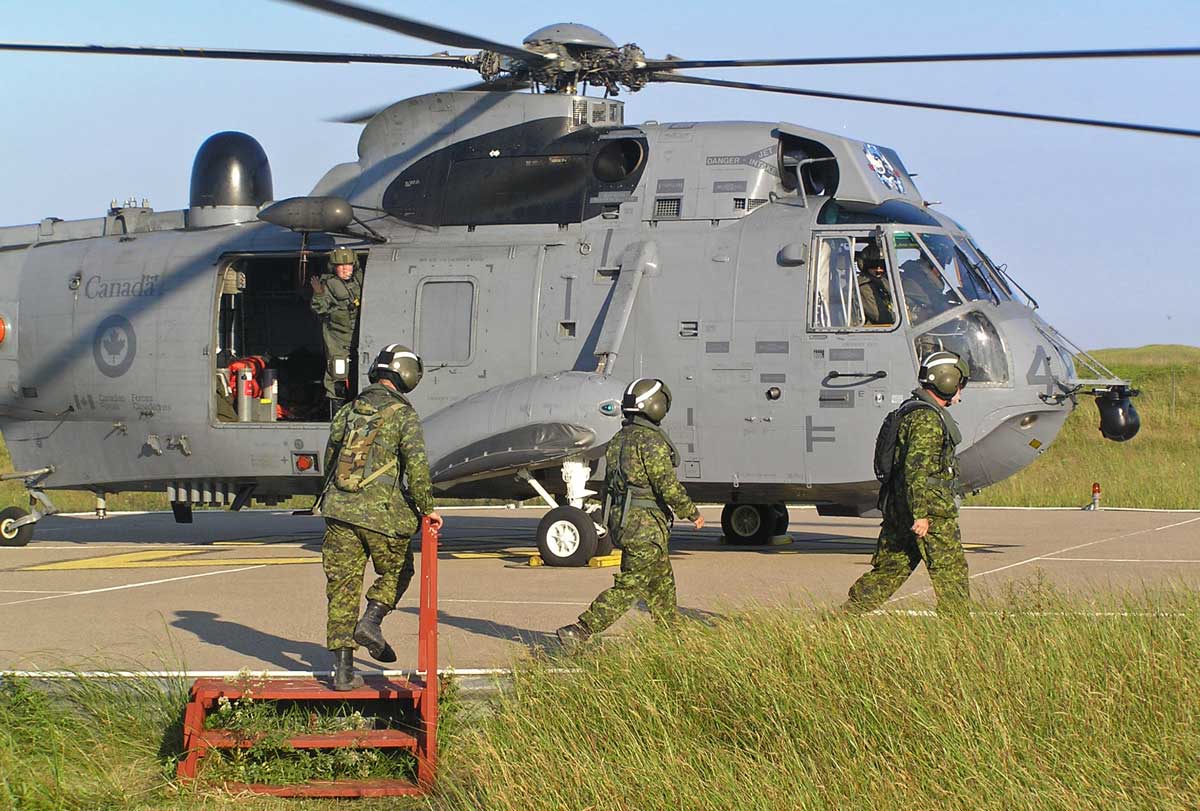 The EOD team depart Sable Island after the six-hour operation. Prior to conducting the disposal project on the island, the EOD plan had been reviewed by Environment Canada, Fisheries & Oceans, and the Sable Island Stakeholders Advisory Committee.

Each year the EOD team is called upon to dispose of 100 or more MLMs found along the coastline of mainland Nova Scotia and Cape Breton. If an MLM is found on a beach, do not touch or attempt to move it. Persons finding an MLM should record and mark its location, and call the police. Military or police personnel trained in the handling and disposal of unexploded ordnance will deal with the MLM.