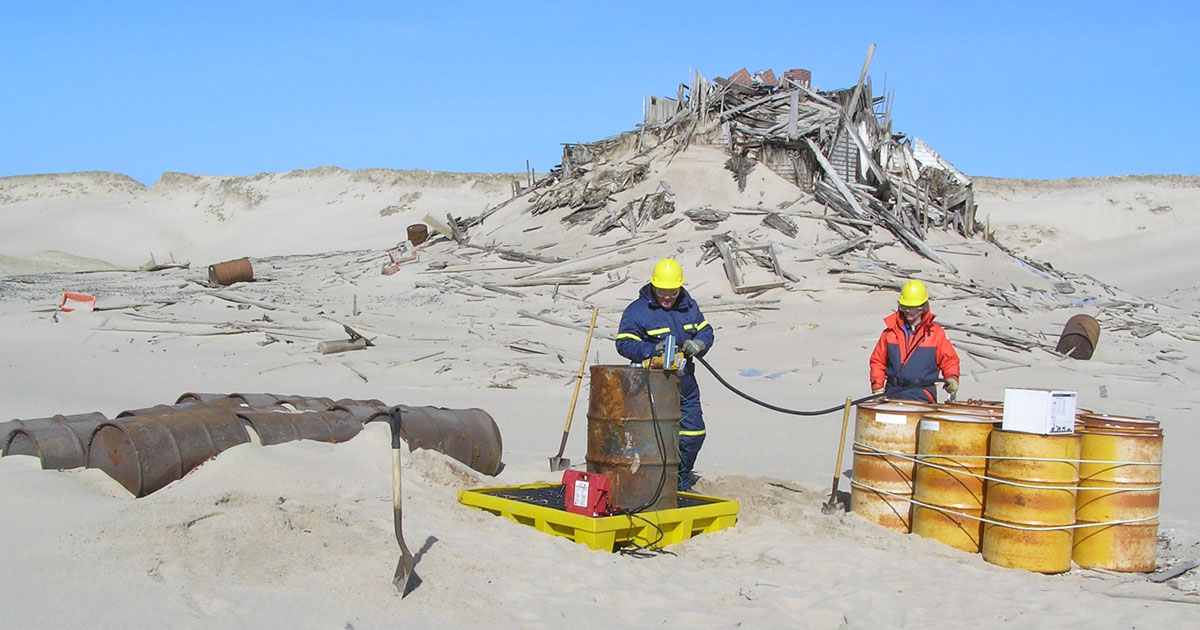 In 2005, the Canadian Coast Guard was the management authority for Sable Island, and the Meteorological Service of Canada owned and operated the Sable Island Station.
The island became a national park in 2013, and is now managed by Parks Canada. 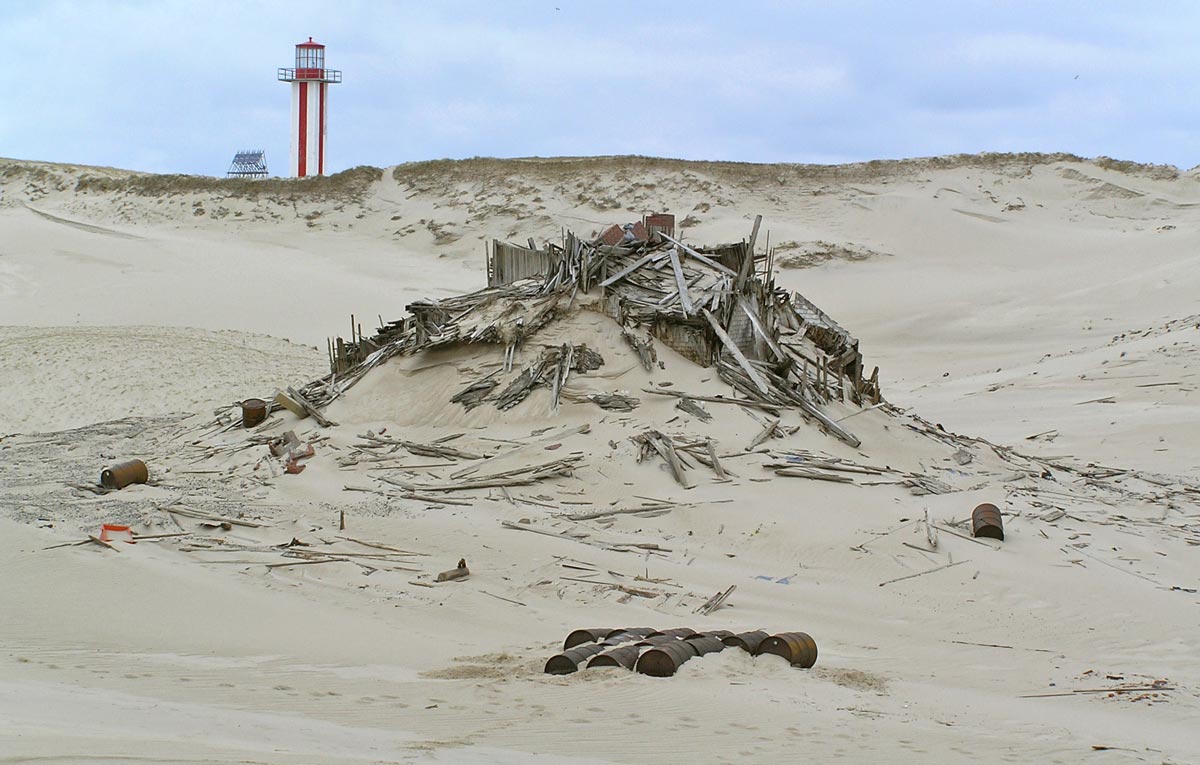 The ruins of the light keeper’s house at East Light. The most recent East Light tower is on the dune in the background. In spring 2005, as sand was scoured away by late winter winds, a cache of 45 gallon (205 litre) diesel fuel drums appeared near the ruins.

At various locations on Sable Island, remains of the old life saving stations, communication installations, field camps, and other human activities long ago discontinued become exposed as wind blows sand away from infrastructure that had previously been buried by wind-blown sand. Although it is not a common occurrence, some exposed materials can involve environmentally hazardous substances.

During a warm March afternoon, an odor of fuel led to the discovery of a cache of fuel drums in the East Light area. There were 12 drums lying on their sides in a group just south of the house ruins, and several others scattered about. Some of the drums were full, and fuel was seeping into the surrounding sand. 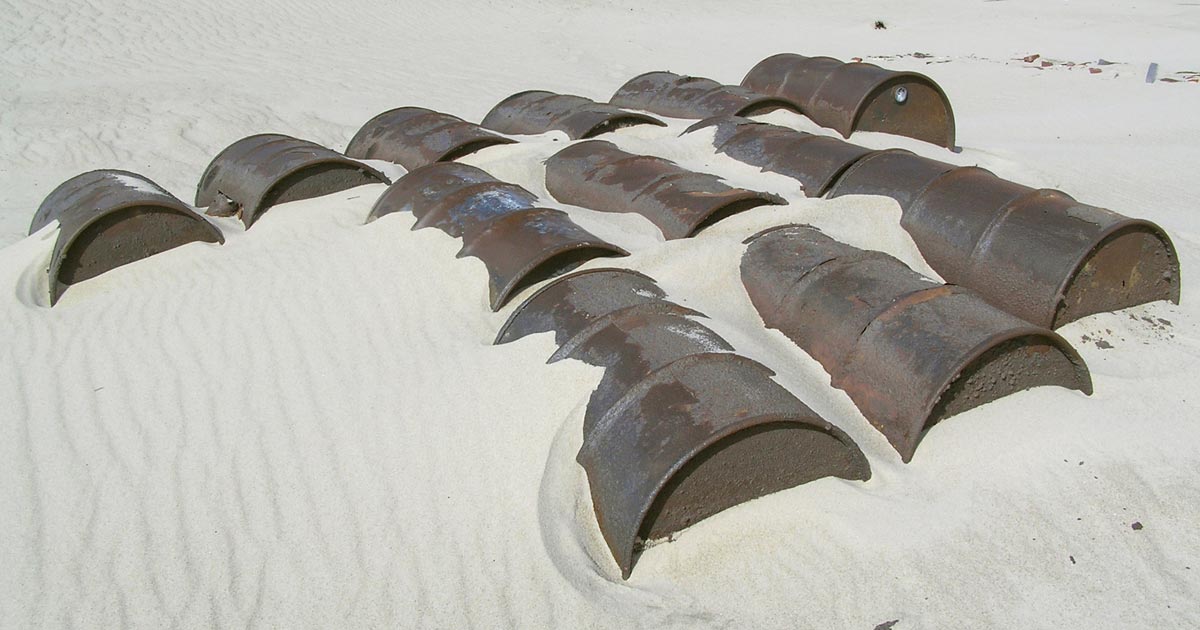 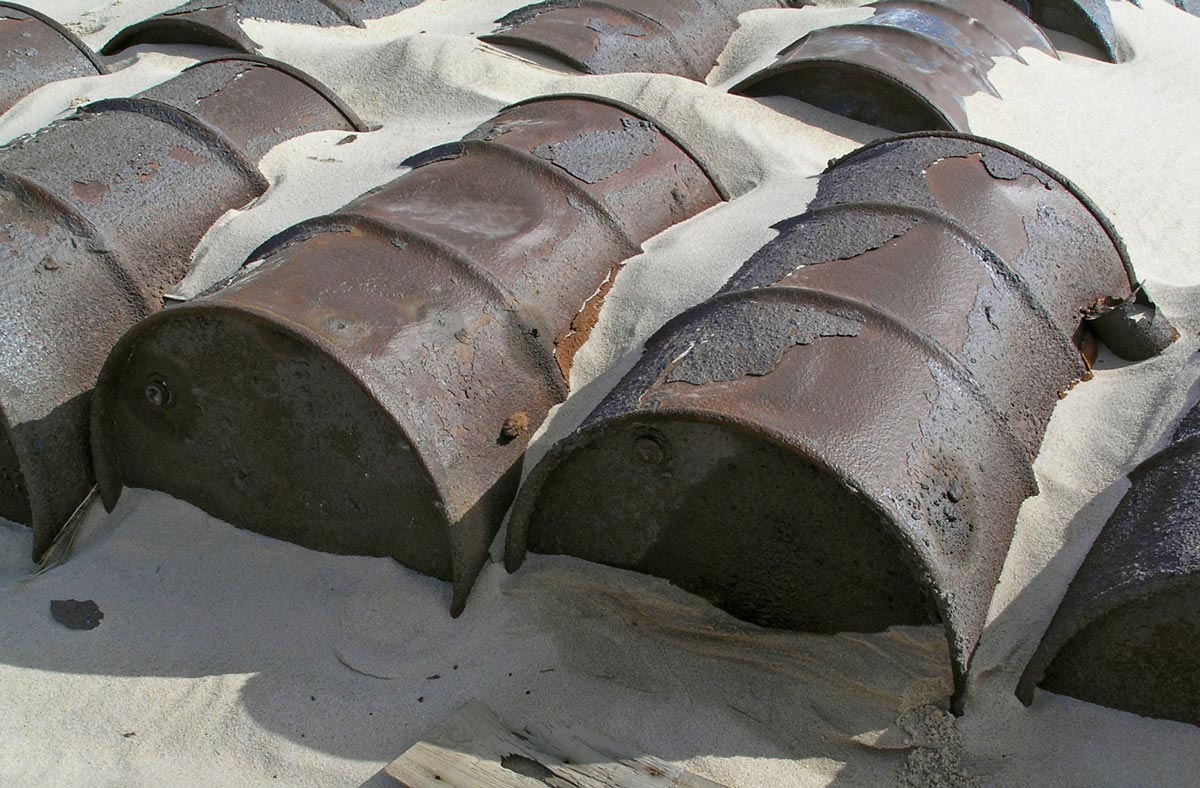 The drums could have been buried at the site since the mid 1970s. After the light was automated, and the house was no longer used as a light keeper’s residence, researchers with Fisheries & Oceans Canada and Dalhousie University occupied the house as a seasonal field camp. The fuel would have been used for heating and for running a tractor.

It is likely that the 12 drums were buried by wind-blown sand during months when the building was unoccupied, and once buried, they were overlooked as the house was less frequently used. All the drums were heavily rusted, and fuel was seeping from tiny holes caused by corrosion. 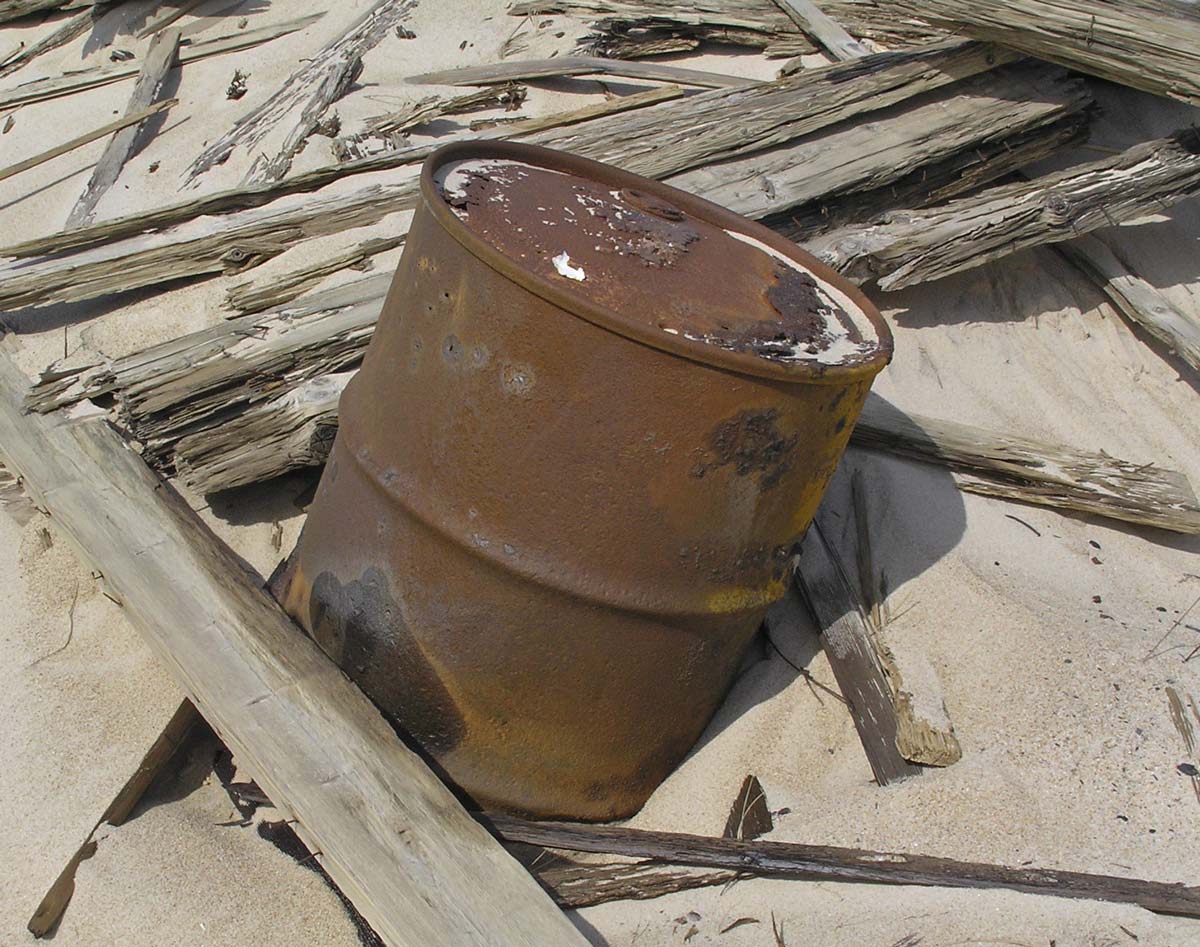 One of the scattered drums was lodged amongst wooden debris of the collapsed light keeper’s house.

The find was reported to the manager of the Sable Island Station (Meteorological Service of Canada, MSC), and the Canadian Coast Guard (CCG) was immediately notified. CCG had responsibility both because it was the management authority for Sable Island, and because the East Light complex had supported Aids to Navigation. However, on this occasion, due to operational requirements there would have been a delay in CCG’s ability to respond, so MSC personnel from the station conducted the cleanup. To assist, CCG sent out a pump and cleanup supplies. 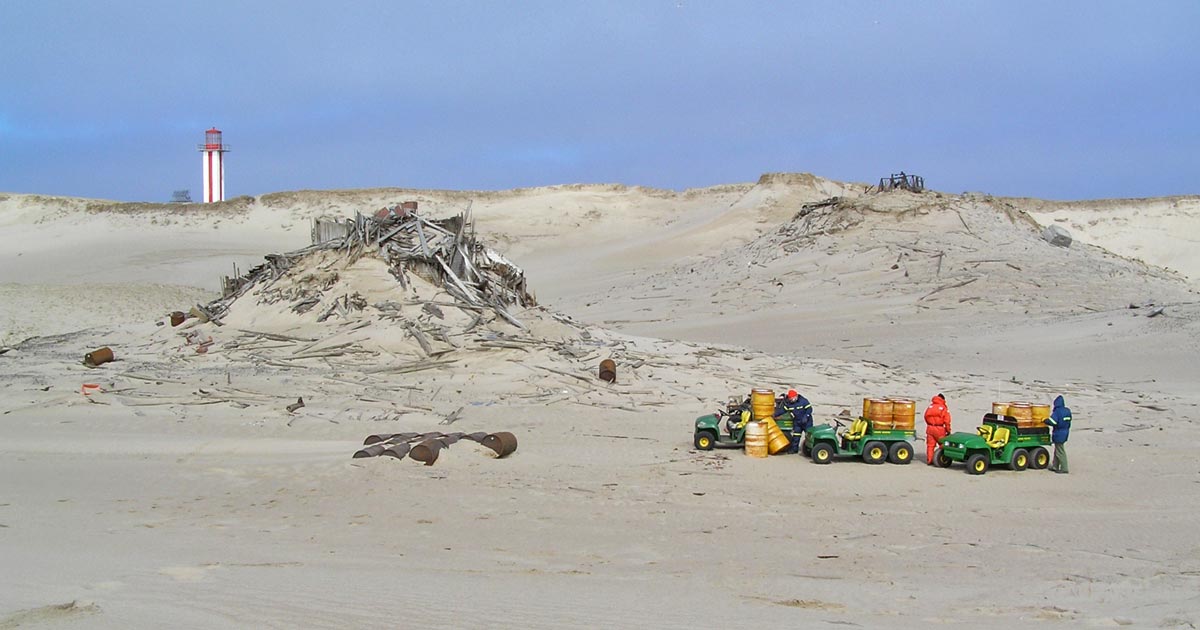 The East Light area, showing two large debris mounds—in the foreground, the light keeper’s house, and in the background (in the right side of the photograph) are the ruins of a earlier light tower.

To prevent further contamination of the surrounding terrain, the fuel had to be transferred to intact drums. Relatively new drums were available at one of the two helicopter landing pads on Sable Island. Two Government of Canada departments—Fisheries & Oceans/Coast Guard, and National Defense—maintained a supply of helicopter fuel on the island. Once emptied, the drums were stored until they could be removed by CCG during the annual sealift in early summer. 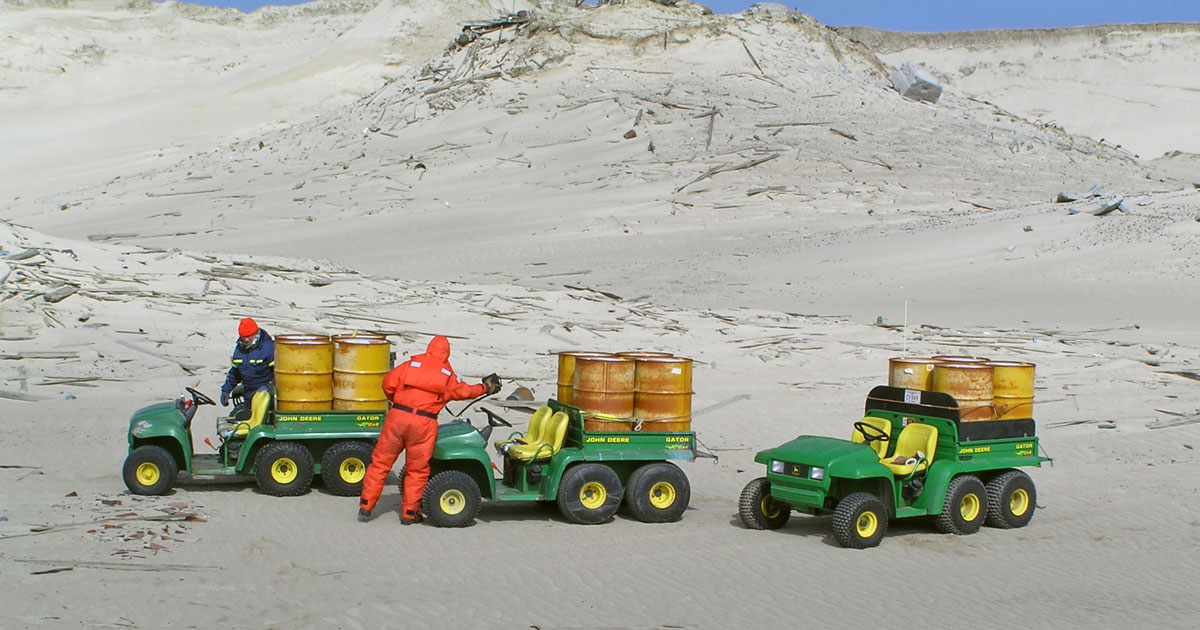 MSC station staff collected 12 of these empty drums and delivered them to the East Light site, four carried on each of the station’s three Gators. A second trip delivered a spill containment platform and other supplies. Travelling by Gator, it was a 45 minute drive along the north beach, a distance of about 20 kilometres from the Station. 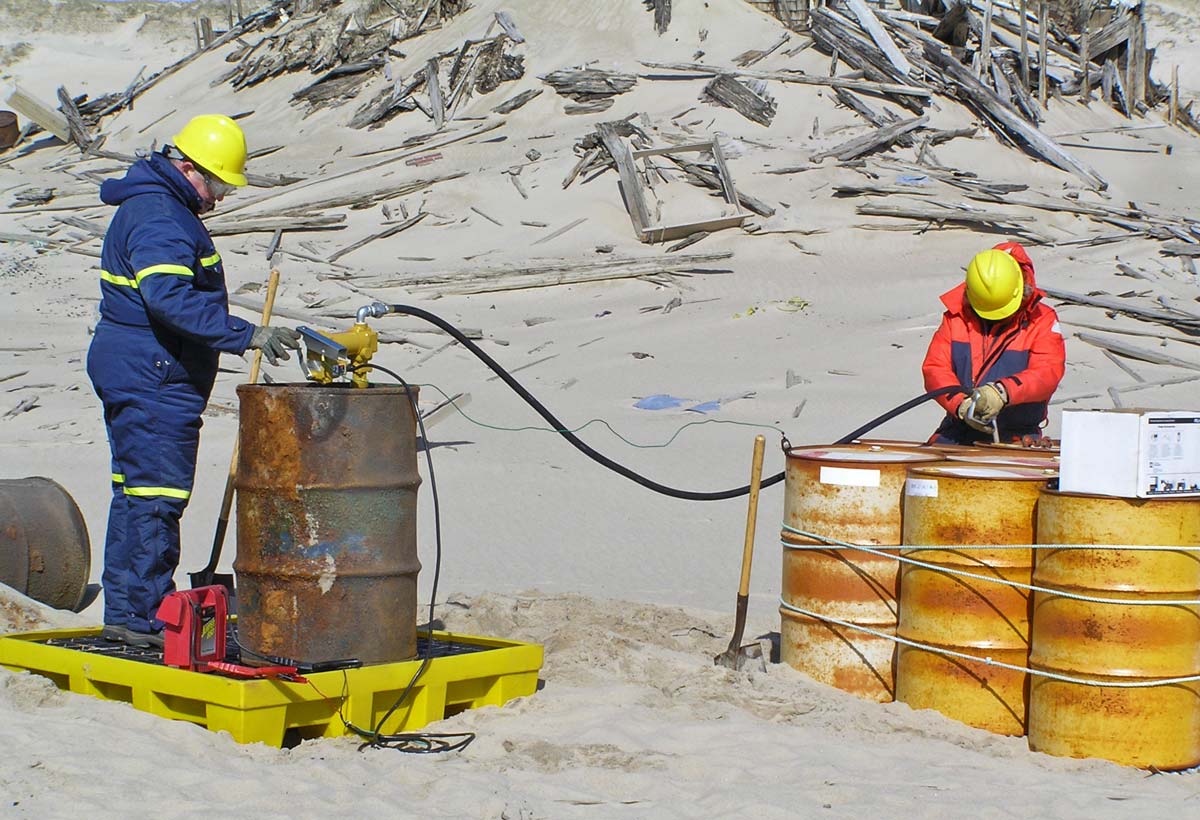 The first old drum was moved to the containment platform so that any fuel spilled during the pumping operation could be collected. A cable connecting the pump and the receiving drums prevented a build-up of a static electric charge. Although the old drums were seeping fuel, most were almost full, indicating that the leaks had been very slow or only began recently (perhaps when the drums were exposed).

The second old drum was in such bad condition, that once it was upright on the containment platform, fuel began spurting from many tiny holes. Although the fuel was successfully transferred to a new drum, there was a concern that one or more of the other corroded drums would simply break open when moved, resulting in an uncontrolled spill. 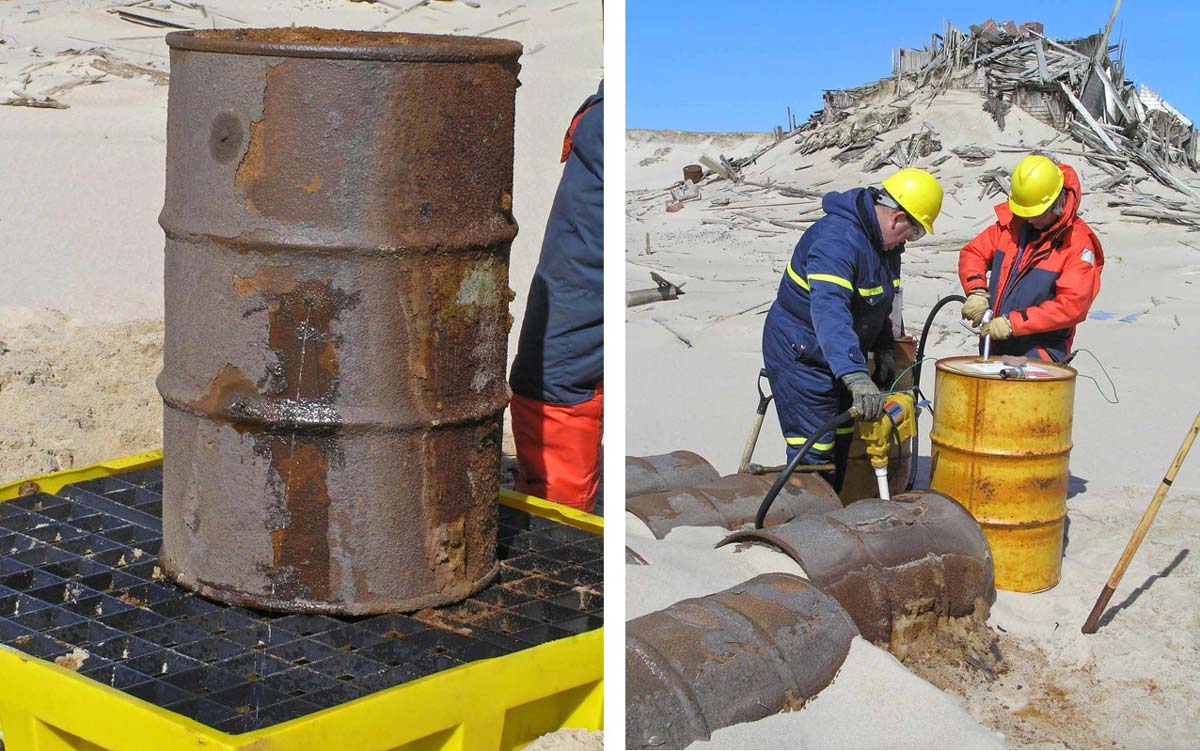 So, the rest of the drums were pumped where they lay. In most, the metal was so thin with patches of corrosion that the pump’s intake pipe could be pushed through to the inside of the drum. Once most of the contents had been transferred, the drums could be safely moved. 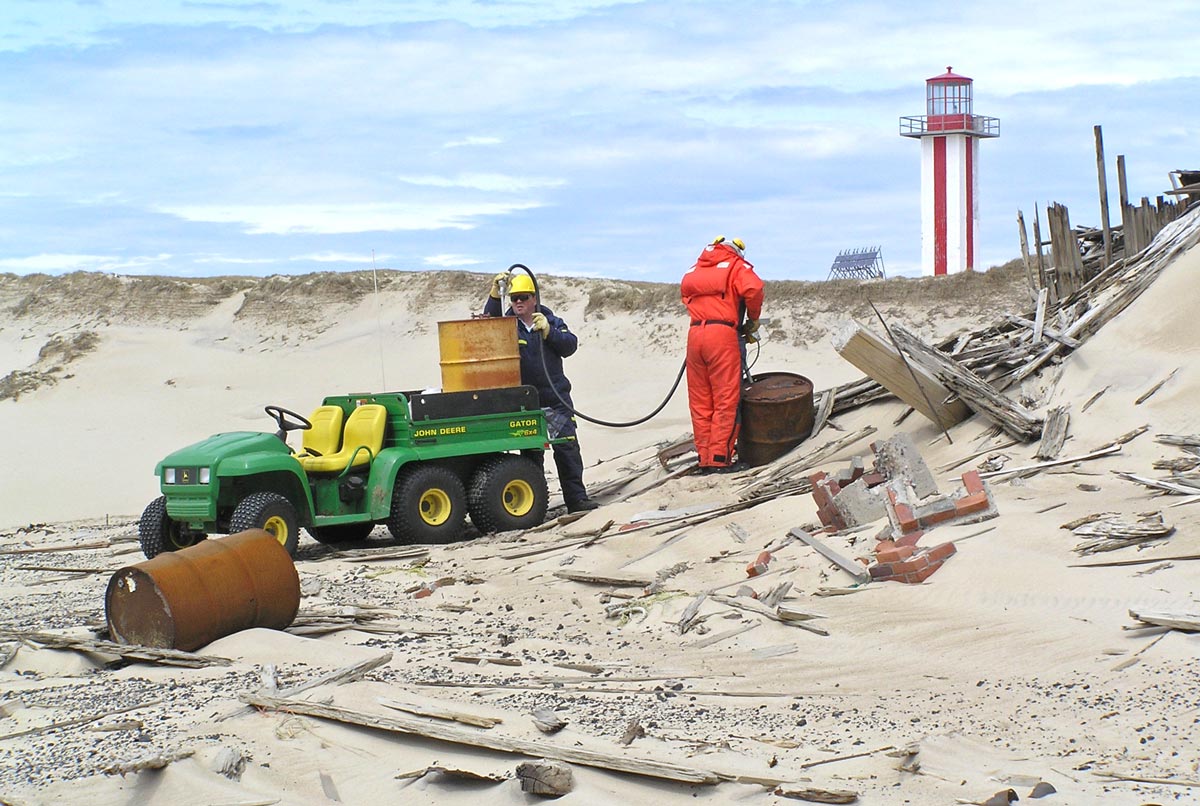 The upright drum lodged in the house debris also had to be emptied before it could be removed, so its contents were pumped into a new drum on the back of the Gator. 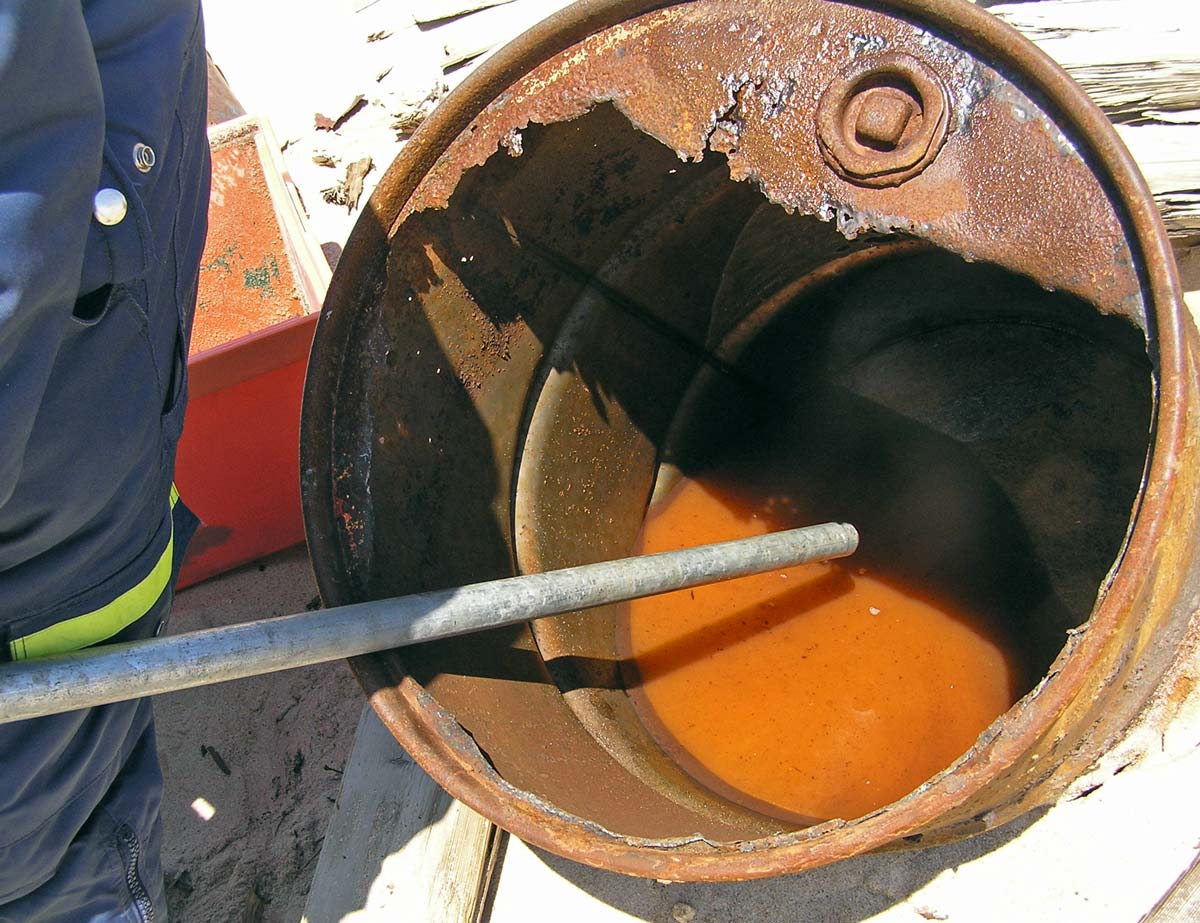 This drum might have been in use in the weeks before the house was finally abandoned, and thus ended up amongst the house debris. There were large holes in the top and side of the drum, and the remaining fuel was floating on an accumulation of water and sand. 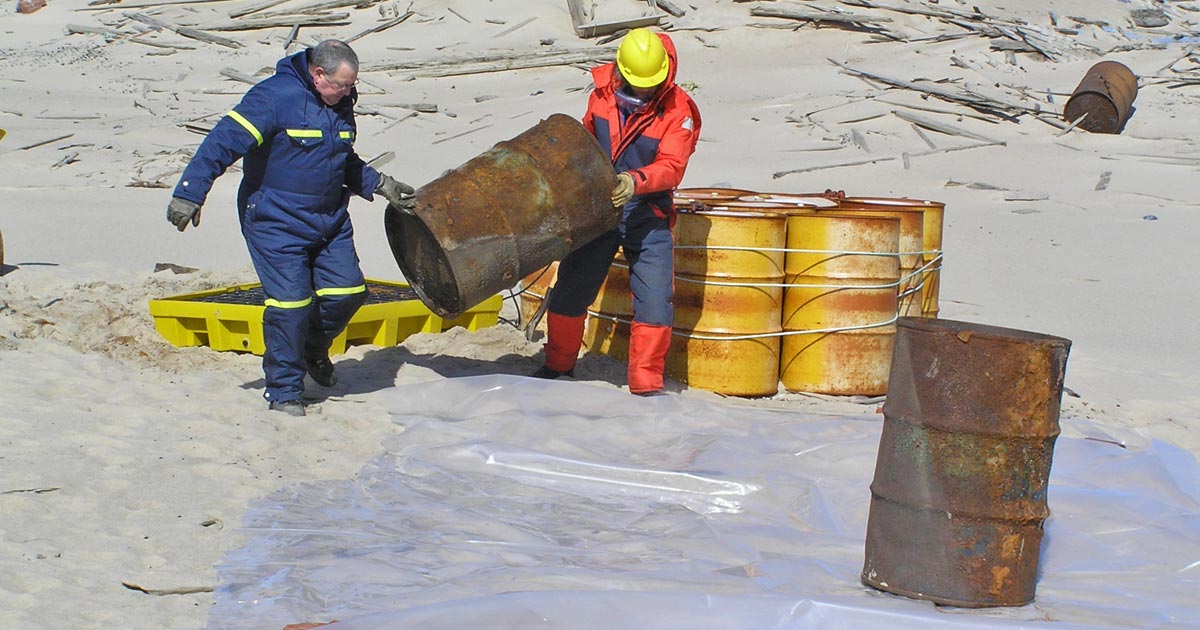 In the group of 12 drums, six were mostly full of fuel. The layout of the drums in the cache suggested that the other six had probably been left there as empties. Of these, three contained a trace of fuel, and three were completely dry inside. Although the diesel fuel was successfully pumped from all the rusted drums, fuel residues remained inside them. So, all were wrapped in plastic sheet provided by CCG for this purpose. 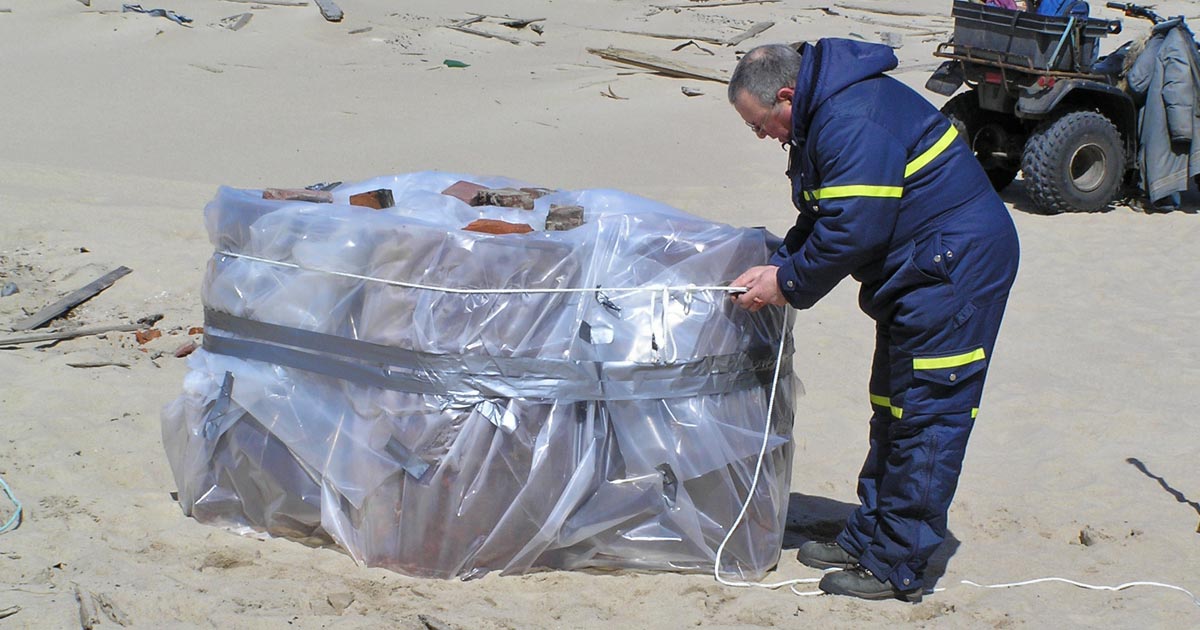 Depending on their condition, some of the drums were bundled and wrapped together, and secured with rope and duck tape. 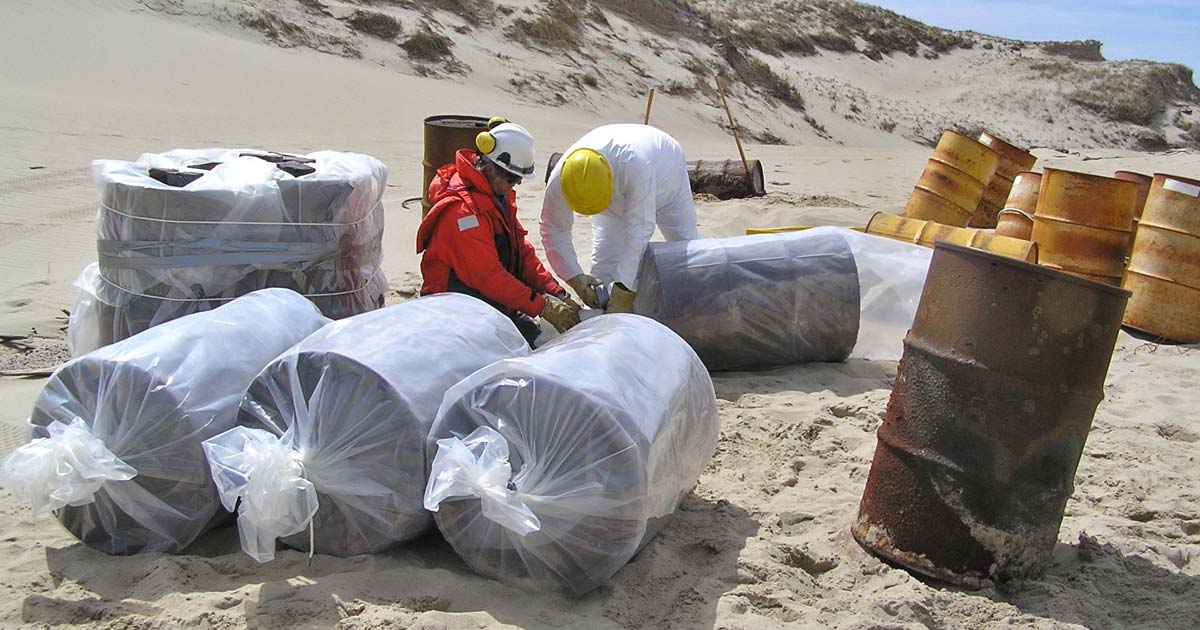 Other drums were wrapped individually to prevent the release of any fuel residues or contaminated rust and metal flakes. 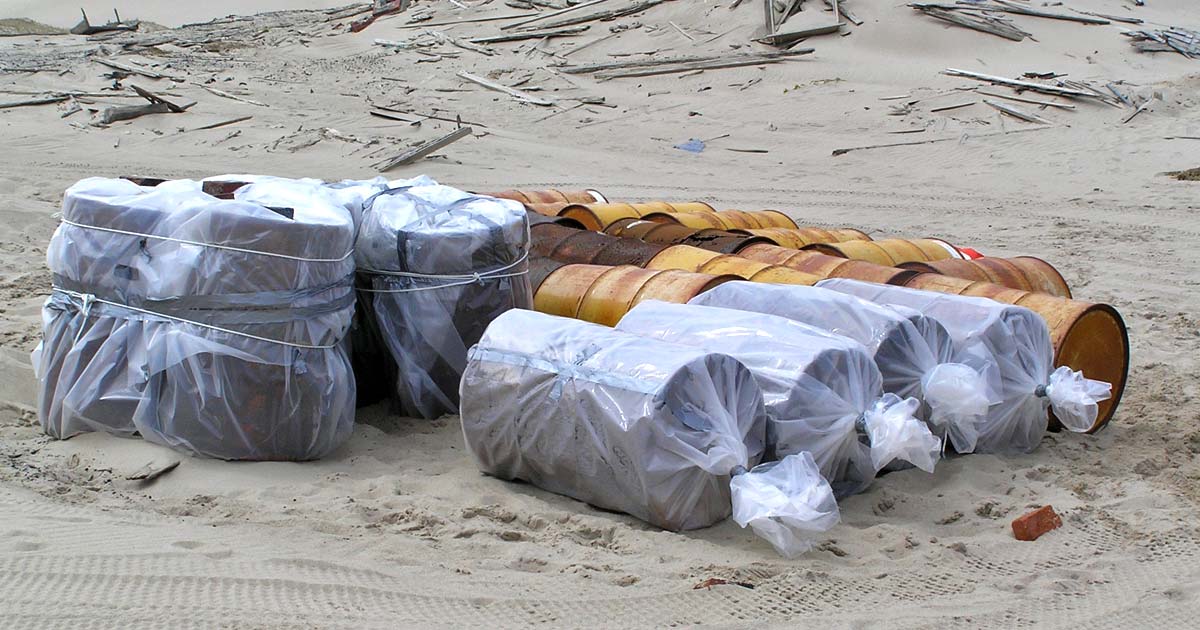 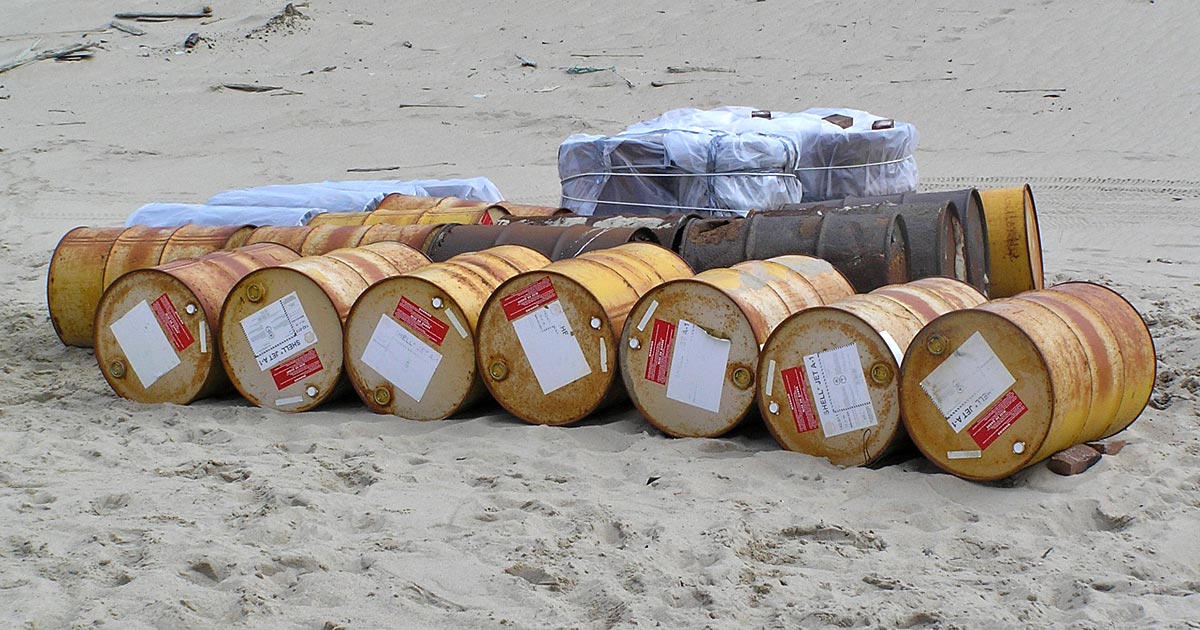 The cleanup of the abandoned fuel cache at East Light was completed by MSC personnel. Seven of new drums contained diesel fuel—roughly 1200 litres transferred from the old drums which had been buried for perhaps three decades. The other new drums held various contaminated fragments and residues. The secured materials were left at the East Light location to await removal from the island in early June when CCG would arrive for the annual sealift. 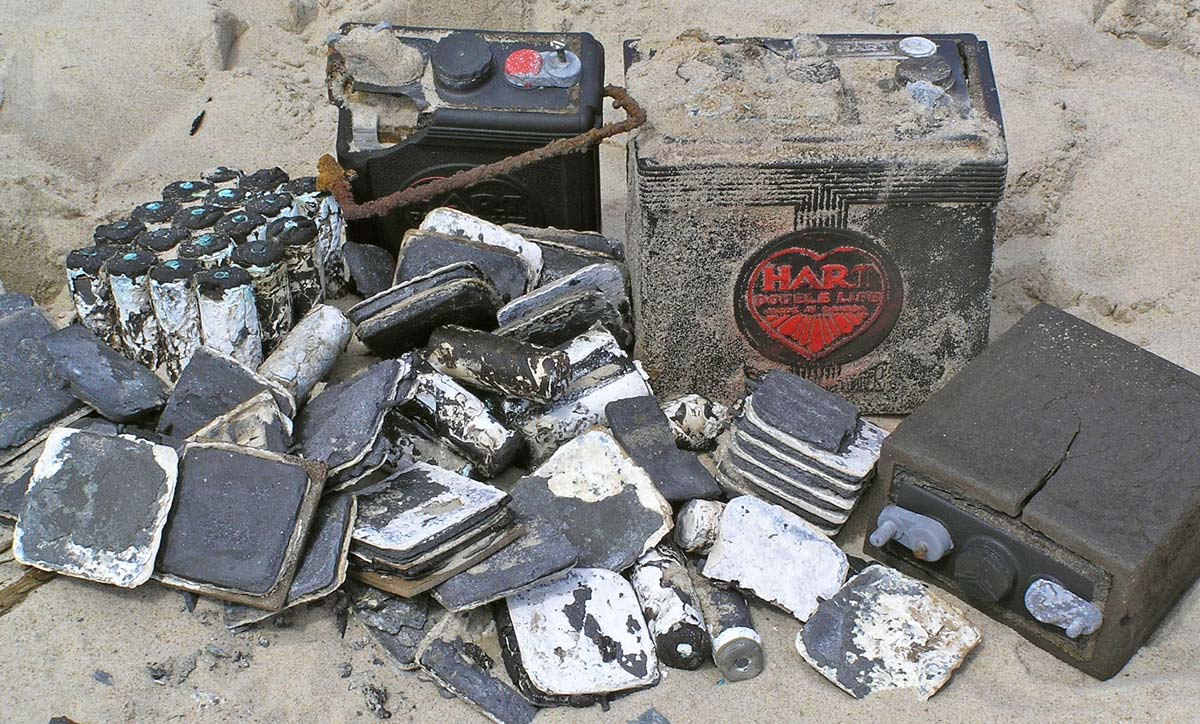 In addition to the fuel drums, old vehicle batteries were found amongst the debris in the site. Some of the batteries had broken, and fragments of lead were scattered in the sand. This material was collected and taken to the MSC station for appropriate disposal. 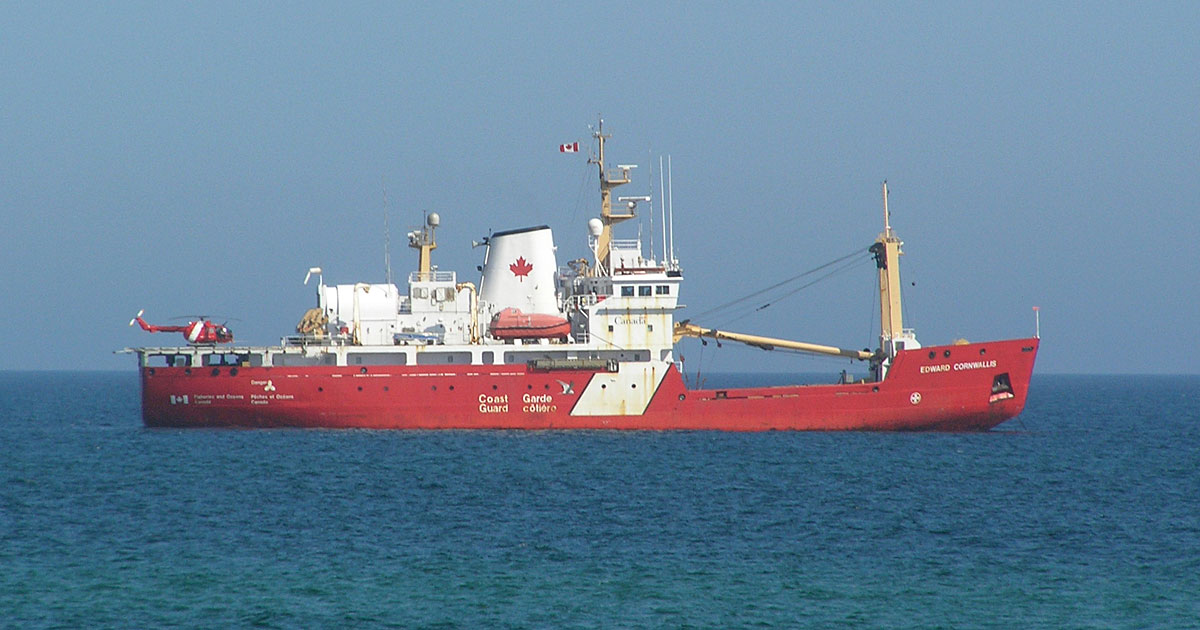 In early June 2005, the Canadian Coast Guard ship Edward Cornwallis arrived at Sable Island and anchored off the north side (north of the station). The CCGS Edward Cornwallis (length 83 m), classed as a “light ice breaker and major navaids tender”, has a helicopter hangar and landing pad located at the stern. 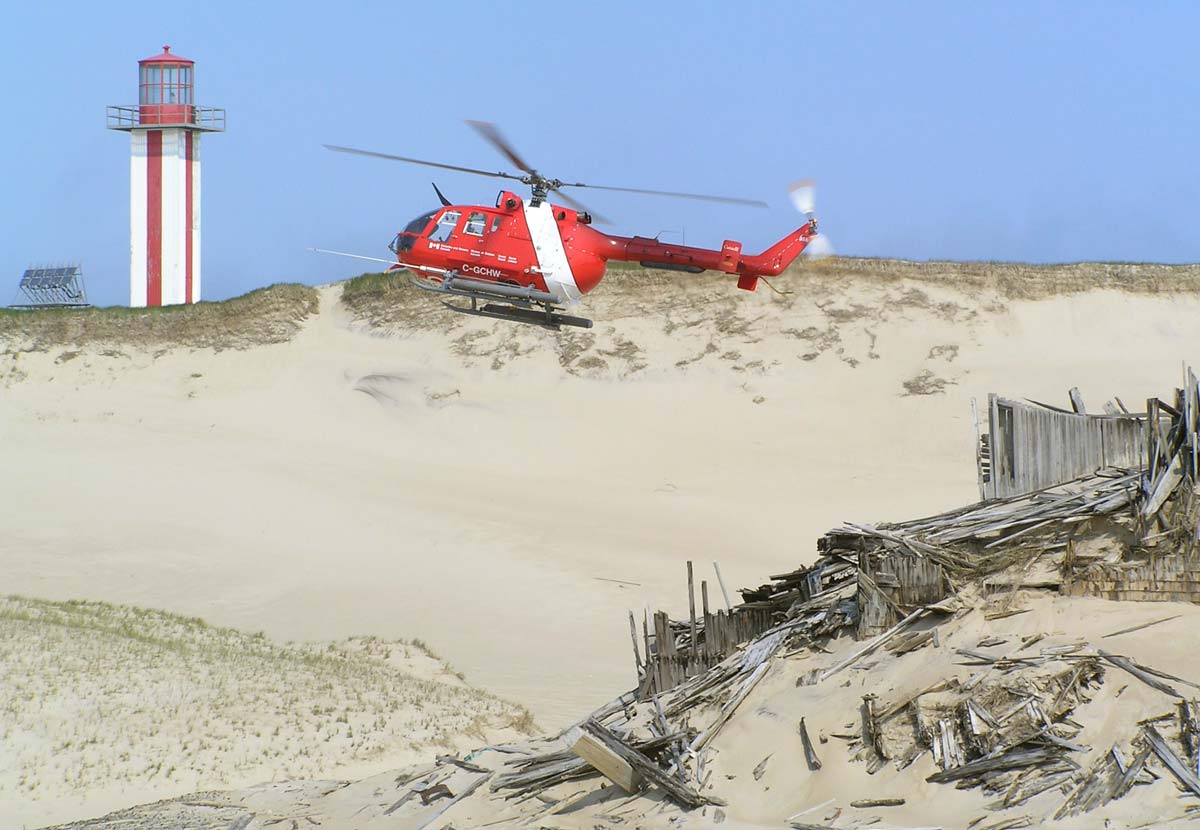 During the CCG sealift, most supplies were transported from ship to Sable Island by helicopter. The aircraft in service for the 2005 sealift was a Messerschmitt-Bolkow-Blohm 105, capable of carrying sling loads of up to 450 kg.

The full drums and old empties were placed into cargo nets, making six loads, and each net was hooked to the sling line as the helicopter hovered about 30 m overhead. The operation took about an hour. 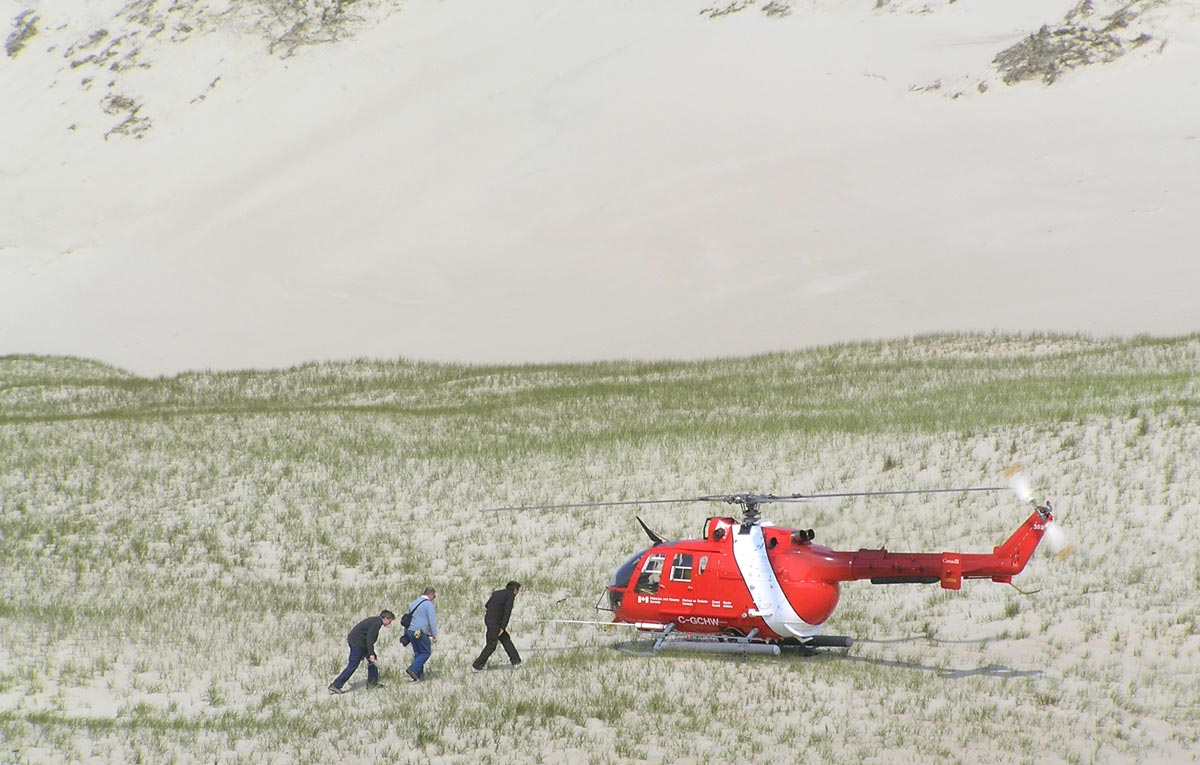 Once the last load had been delivered to the CCGS Edward Cornwallis, the helicopter returned to pick up the CCG personnel. With the annual sealift completed, and everyone aboard, the ship weighed anchor and headed back to the Canadian Coast Guard base in Dartmouth, Nova Scotia.

Zoe Lucas, July 2019
Originally published in the website of the Friends of the Green Horse Society in June 2005

As noted above, in 2005, when this account was prepared, the Canadian Coast Guard was the management authority for Sable Island, and the Meteorological Service of Canada owned and operated the Sable Island Station and provided the year-round human presence on the island.