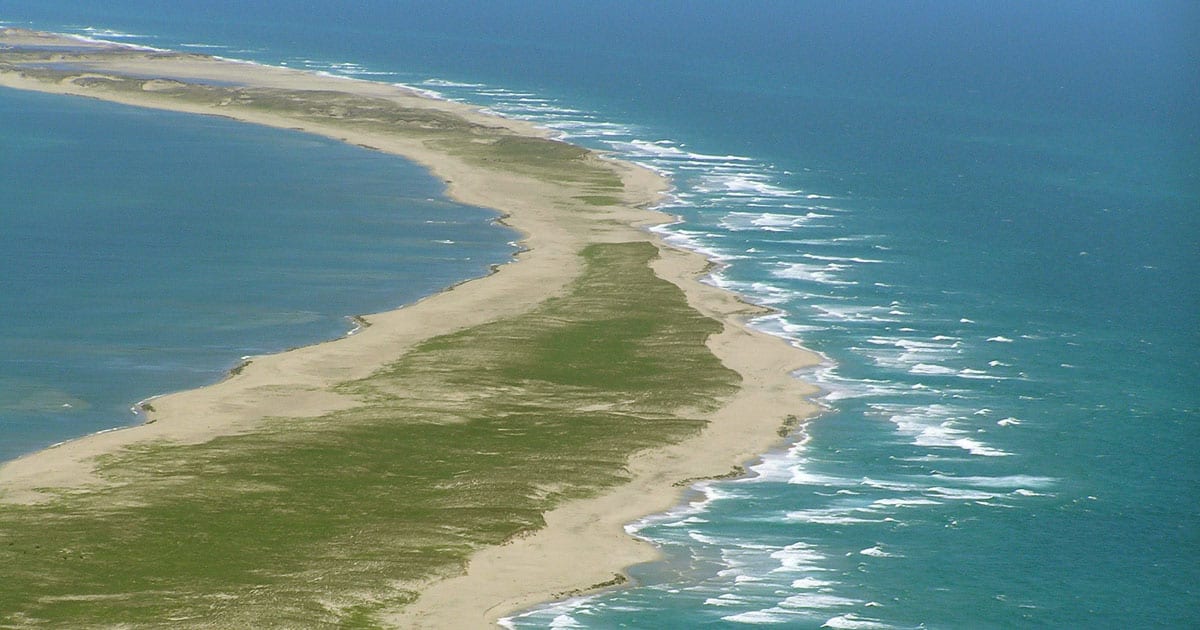 Image above: Sable Island in May, a view looking from the West Spit towards the West Light area in the distance (in the upper left of the photo).

Sable Island’s far offshore location makes it an ideal platform for monitoring events and trends in the surrounding ocean. Regular and systematic beach surveys for marine litter, plastic ingestion by seabirds, entangled seals, tar balls and oiled birds, and occurrences of beached marine animals such as cetaceans, sea turtles and invertebrates, can provide a wealth of information about trends in marine pollution, species distribution, and ocean circulation.

Various beach monitoring programs have been conducted on Sable Island. Marine litter was first studied in the mid-1980s; beached cetaceans were recorded and sampled from 1990 to 2012, and extralimital seals from 1994 to 1998; and surveys for oiled and entangled seabirds have been underway since 1993. Also, for several decades observations of uncommon and unusual events such as occurrences of sea turtles, large numbers of Portuguese man-of-war, and sub-tropical fish and drift seeds, have been documented. Results of these studies have been published in peer-reviewed journals, or reported at public presentations.

During 2019, a comprehensive and systematic beach monitoring program is being developed. The program will resume/continue and integrate the various surveys, review protocols, expand the focus and increase the effort, train personnel, identify short- and long-term research goals, and establish reporting timelines. This work, led by the Sable Island Institute, is being conducted as part of a partnering agreement with Parks Canada.

The monitoring program will provide an ongoing account of what is happening on the beach, information that can be used by Parks Canada in management of the Sable Island National Park Reserve. The results will be shared with the public through the Institute’s website, social media, workshops and presentations, and the data will be used to answer research questions about conditions, processes and changes in our marine environment.

Sable Island’s shoreline—the north and south sides of the island, from west tip to east tip—is over 80 km long. Depending on the materials and organisms being studied, beach surveys are generally conducted by searching the entire shoreline (e.g., beached seabirds), or by establishing a series of permanent sample areas (e.g., marine litter). Also, special projects such as brand audits, or responses to events of unusual scale or impact (e.g., a mass stranding of dolphins), will be undertaken as needed.

Found on the Sable Island Shoreline

Bringing the various beach surveys into one program will be particularly effective as there can be much overlap in occurrence and impacts, such as marine animals becoming entangled in, or ingesting, plastic debris.

Plastic Litter and Other Persistent Debris

None of the human activities underway on Sable Island are a significant source of debris on the beach. There are occasions when someone working on the island loses a mitt, a pen or a tie-down, or a plastic bag gets away from them, but the numbers are relatively minuscule. So virtually all of the large and small manmade items found in shoreline surveys is litter that has come from the ocean. Far smaller fragments—microplastics—also occur on the beach, and this summer sampling for microplastics will be added to the study of beached litter.

Grey seals with plastic sheet and fishing gear caught around their necks.

Entangled wildlife, mostly seals and seabirds, are commonly observed on Sable Island. The netting and plastic were removed from the seals shown above, and personnel with the Fisheries & Oceans Canada seal research team routinely free entangled individuals. However not all entangled seals are sighted and caught. Some seals, and almost all entangled seabirds, are found dead, having been killed by the entangling material. The most common of these materials are netting, monofilament line, rope, and plastic strapping, and for birds balloon ribbons can be added to the list.

Corpses of seabirds, as well as some live birds oiled or clean but in weakened condition, are commonly found on the beach. Numbers range from a dozen to hundreds depending on many factors including the time of year, weather events, foraging success, and oiling incidents. Also, as noted above, some birds have died after becoming entangled in marine litter. Other seabird corpses, especially those of Northern Fulmar, show no external injuries or oiling, but when necropsied are found to have ingested numerous plastic fragments while feeding.

Corpses of cetaceans—whales, dolphins and porpoises—are commonly found on Sable Island. Some of these animals appeared to have died after stranding on the beach; others died at sea and washed ashore as corpses ranging from being in relatively fresh condition to highly decomposed and scavenged. Most often they have occurred as single individuals, but there have also been mass stranding events on the island. Surveys documenting occurrences and systematic collection of data (standard measurements, tissue sampling, examination of stomach contents, etc) can provide information about species composition and distribution, diet, and natural and anthropogenic causes of mortality (the latter including pollution, noise, and vessel strikes).

Sea Turtles and Other Marine Organisms

Some of these sea creatures found on Sable’s beaches have been associated with, or affected by, persistent litter in the marine environment. As noted regarding cetaceans, all records of sea turtles and sub-tropical fishes and invertebrates, as well as events involving species commonly found in the Sable Island area, provide insights regarding trends in species composition, seasonal and extralimital distribution of species, and ocean temperature and circulation patterns, as well as much other information essential to our understanding of the marine environment. And let’s not overlook the coconuts!