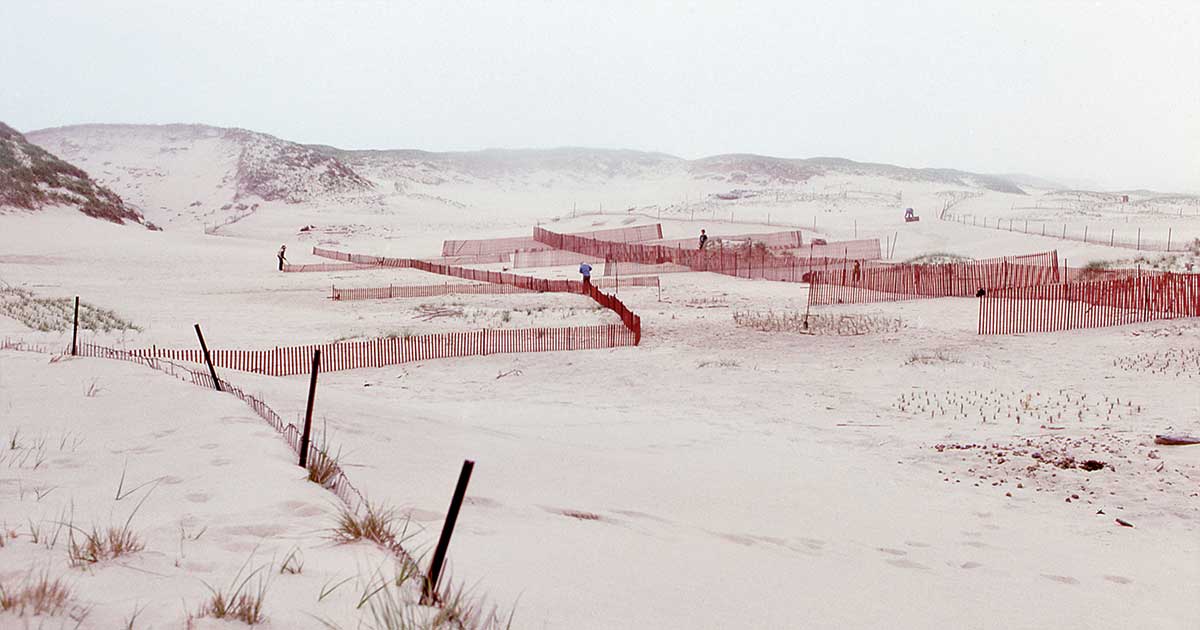 In the early 1980s, while I was a student at the art college in Halifax (NSCAD), I met Zoe Lucas, who was recruiting people to work for a month on Sable Island, on a terrain restoration project. I jumped at the opportunity.

After a week of flight delays (due to unfavourable landing conditions on the island), we finally made it … and arrived in early May, to a bleak, late-spring landscape. The pale dunes and dull heath vegetation had barely begun to show the greens of spring. Horses grazed hungrily with their foals in tow, and seals and their pups lined the beaches. Our small crew of 5-6 individuals moved into the old Dalhousie field camp, where the first order of business was to dig out the outhouse, which had been partially buried in sand over the winter months. Our “A-frame” had the luxury of a propane cooking range, a sink with a water pump, and a wood stove for heat, in which we burned driftwood. The weather was mostly windy and foggy, and with only 4 weeks to get the job done, we worked outside right through cold rainy days too. Most mornings we left prepared for the worst: bringing rain gear, long-johns, hats and gloves ….. and shorts – just in case! (because it was glorious when it was sunny).

Our job was to install snow fencing in some of the areas which had eroded, to help rebuild sand dunes, and then to transplant marram grass to stabilize the loose sand and help re-establish vegetation. Over a two-week period we transplanted over ten thousand plants! It was hard work physically but it was good to be outside, rain or shine, working with comrades, and building up an appetite for our communal meals which we took turns cooking. Occasionally we would go to the weather station to have showers – a rare luxury. The staff there lived in permanent residences, with electricity, fridges and bathrooms, telephones and VCRs (luxury!)

By the end of the month, I felt so immersed in the rhythms of this island environment, where the forces of nature seemed barely influenced by humans, that I felt humbled, and didn’t want to go home. I took long walks, absorbing the elements around me, feeling insignificant, like an intruder. It did wonders for my 21-yr old sanity and it greatly influenced my future path in life.
It was a summer job experience which I will never forget.