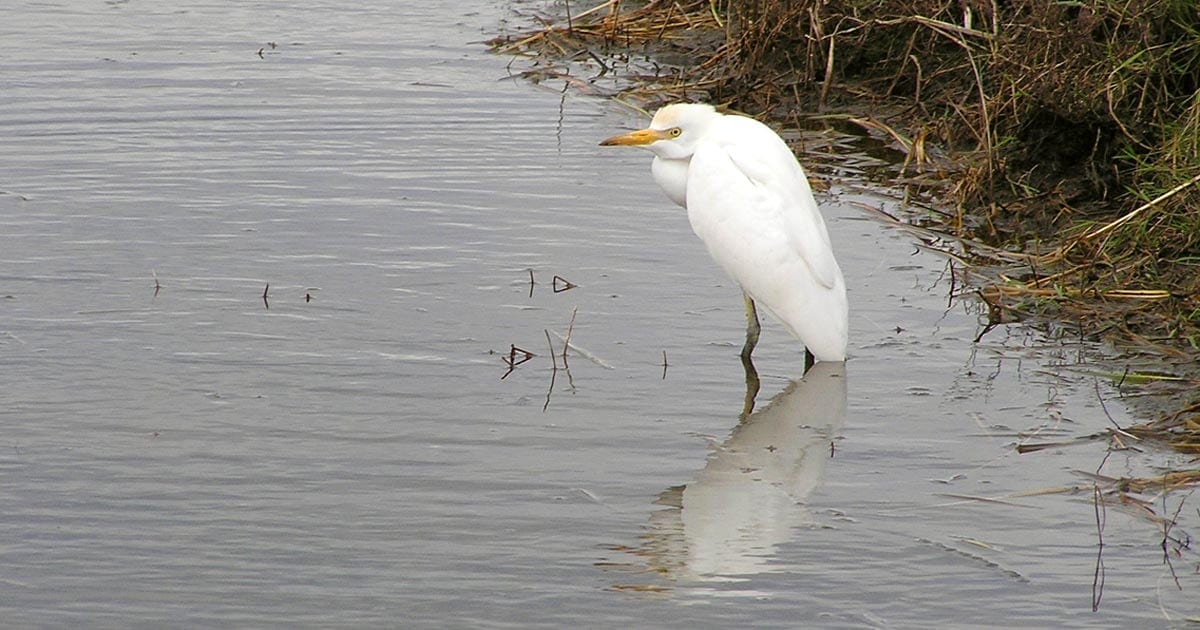 21 Jun A Mortality Event of Herons and Egrets on Sable Island, Spring 2018

Above: Cattle Egret in edge of a freshwater pond on Sable Island, October 17, 2006.

Soon after returning to Sable Island in mid-May, I noted the corpses of 29 herons and egrets: one Yellow-crowned Night-heron Nyctanassa violacea, one Cattle Egret Bubulcus ibis, 12 Great Egrets Ardea alba, and 15 Great Blue Herons Ardea herodias. None of these corpses were fresh; all appeared to have died around the same time in early spring, probably as part of the mortality event that had been reported by groups who were on the island during late March and early April. Comments regarding the latter indicate that there were many more dead and dying herons and egrets than the 29 I found in May. Some of the March-April corpses may have been buried by sand, and others had been collected for necropsy. A report of the total count and a comprehensive review of the event will likely be available some time this summer.

In the meantime, until those results are available, this is a preliminary report of my observations only. I assume that the corpses I found in May had also been recorded by the observers who were working on the island in late March and April, however, since the coordinates for those found in May were noted, that can be confirmed later. A corpse that may have been missed by earlier observers is that of a Great Egret which apparently sought shelter in a crawl space under a building at the Sable Island Station.

Although corpses of Yellow-crowned Night-heron, Cattle Egret, Great Egret, and Great Blue Heron have been found in the past, a mortality event of this scale has not been previously recorded on Sable Island. Seven other heron and egret species have occurred on the island: American Bittern Botaurus lentiginosus, Least Bittern Ixobrychus exilis, Black-crowned Night-heron Nycticorax nycticorax, Green Heron Butorides virescens, Tricoloured Heron Egretta tricolor, Little Blue Heron E. caerulea, and Snowy Egret E. thula. None of the eleven species nest on the island—they end up on Sable as vagrants or regional migrants.

Herons and egrets arriving in early spring could encounter challenging weather conditions with low temperatures combined with periods of wind and rain. This year, between mid-March and mid-April, there were extended periods of high winds. McLaren (1981) suggested that herons and egrets found dead on the island probably arrived in an exhausted condition, and subsequently starved. There are small fish—mummichogs Fundulus heteroclitus and several stickleback species—in the ponds, but perhaps not abundant enough to support as many birds as turned up in March, had they been able to forage.

During the past few decades on Sable Island, foraging habitat for heron and egret species generally associated with water has markedly decreased with changes in topography. Freshwater and brackish ponds are diminishing in size, some disappearing altogether. Aside from whatever role climate change may be having on the island’s hydrology, the effects of dune erosion, infilling by wind-blown sand, and/or saltwater overwash are causing ponds to diminish in depth and surface area, with associated changes in temperature, water chemistry, and species composition. The extent of change varies depending on location, exposure, and surrounding terrain. Many of the remaining ponds no longer have populations of fish or other potential prey items such as leeches that were once common, and where the mummichogs and sticklebacks do still occur, the populations are likely in decline.

The following brief account of historical patterns of occurrence for the four species found as corpses in May 2018, refers to The Birds of Sable Island by Ian McLaren (1981, Proceedings of the Nova Scotian Institute of Science, Volume 31, pages 1-84), and to my notes. The latter do not represent systematic or continuous documentation of birds on the island, but are merely observations recorded while engaged in other activities.

A freshwater pond on Sable Island, diminishing in area and depth as it is filled by windblown sand and subjected to occasional ocean washover during storms. 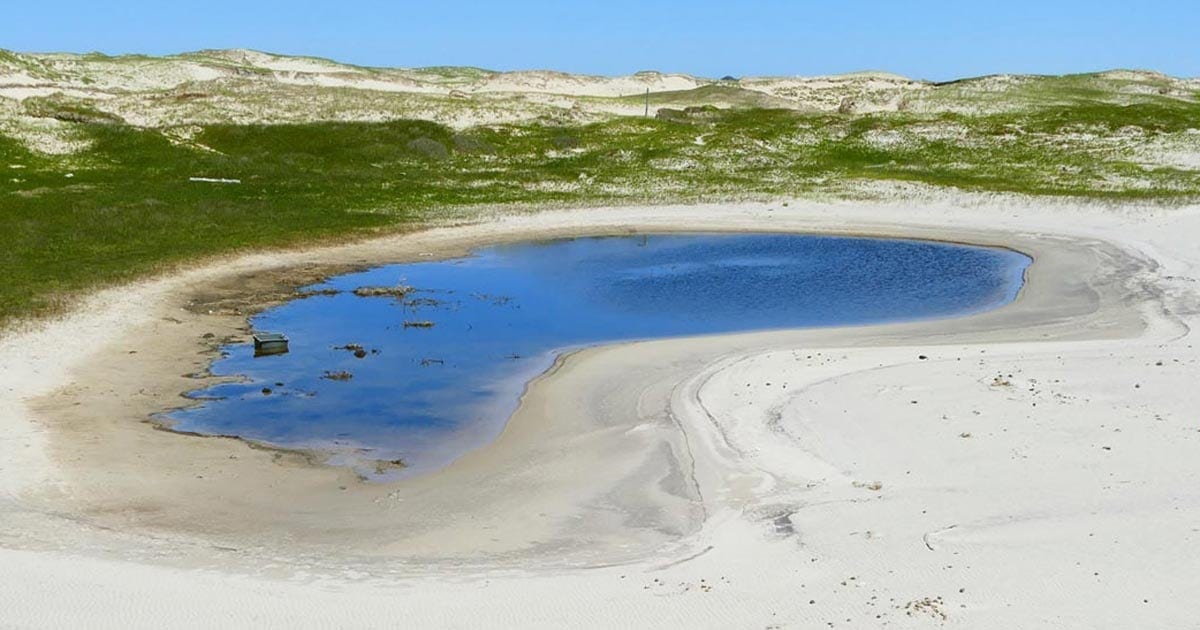 ZL notes: Since 1986, 30 live birds (including 4 adults), all occurring between July 14 and October 17, were recorded. On several occasions two to three immature birds were observed together. Repeated sightings at the same location suggested that some individuals continued to forage at the ponds for as long as four weeks. In late July 1998, two relatively fresh corpses (not recorded earlier as live birds) were found on the beach. 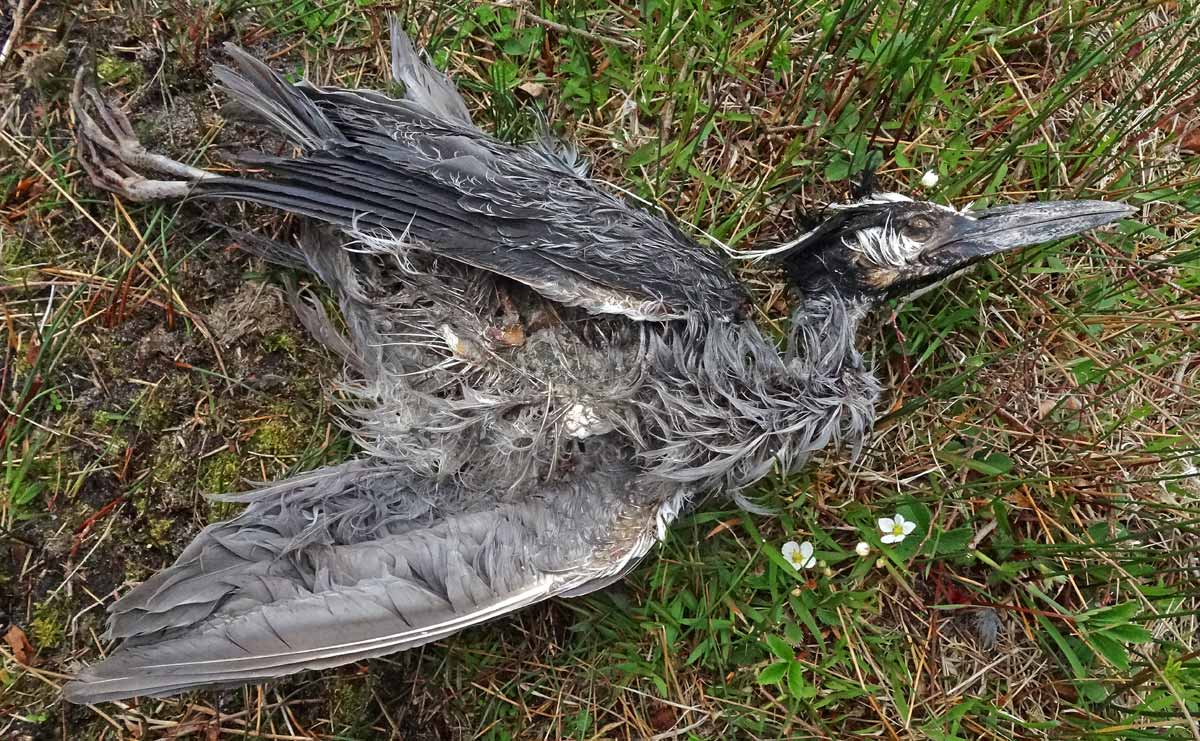 Corpse of the single Yellow-crowned Night-heron found during May 2018. 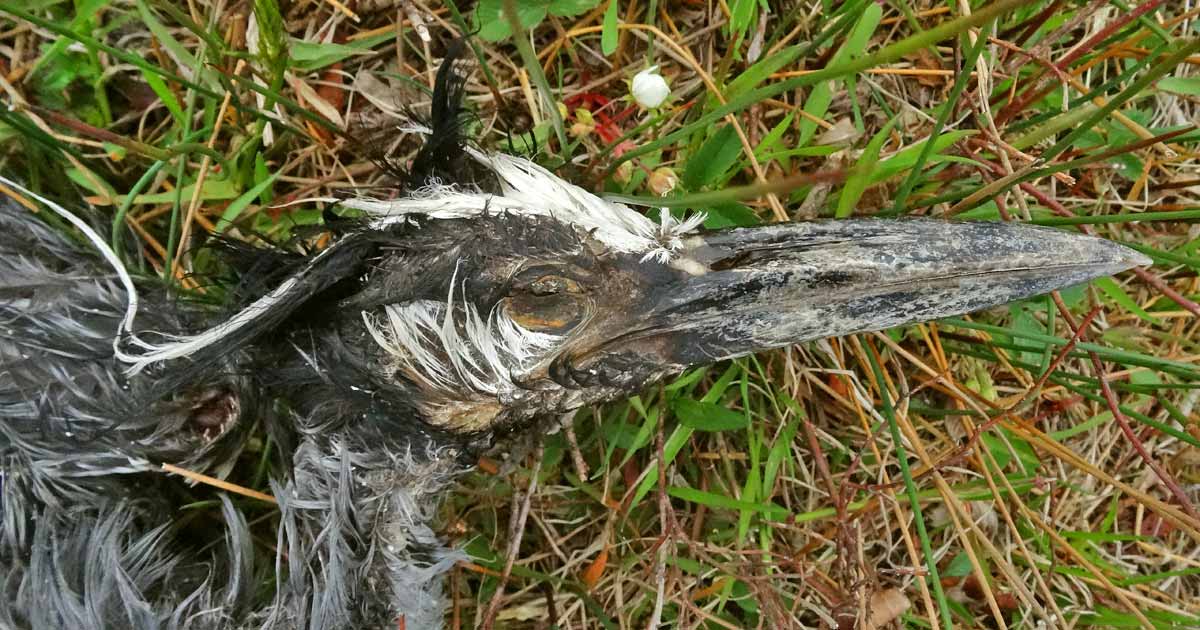 ZL notes: Since 1988, 14 live birds (including 5 adults) and three corpses were recorded. Only two, both corpses, were found in spring (April and May). Of the 14 live birds, 10 occurred during October, with three adults in August-September and an immature in mid-November. Two of the adults were seen together (August 30 to September 24, 1998) most often feeding near horses in the West Ponds area.

Corpse of the single Cattle Egret found during May 2018.

ZL notes: Since 1984, 25 live birds and two corpses were recorded. These records included eight (six live and the two corpses) in spring, between April 6 and May 29; one on June 12; one on July 12; and 17 in autumn, between August 1 and November 12 (mostly in October). Five of the autumn birds occurred on the same day, October 13, 2009: one at Pinetree Pond West, and four at Mummichog Pond. Repeated sightings at the same location suggested that some individuals stayed for a few weeks or longer, such as a bird that remained at West Ponds from April 6 to May 6, 2000.

Corpses of four Great Egrets in the same area—four of the 12 individuals found in May 2018. 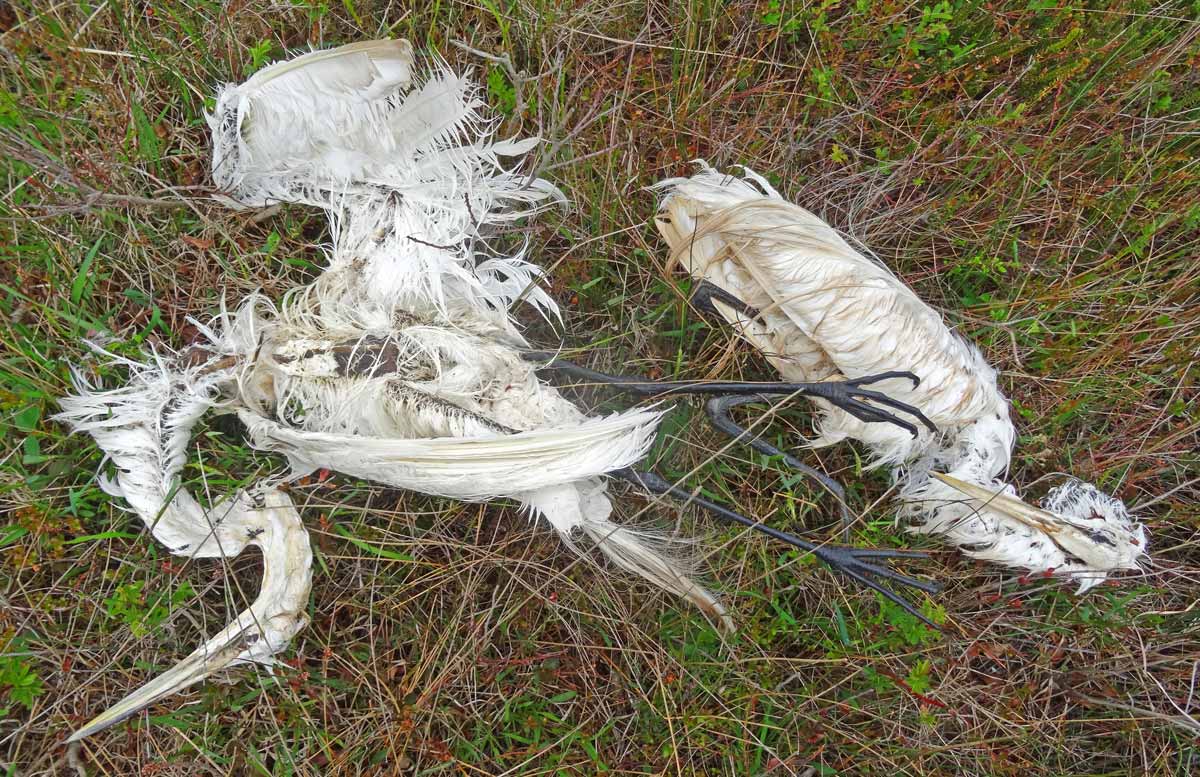 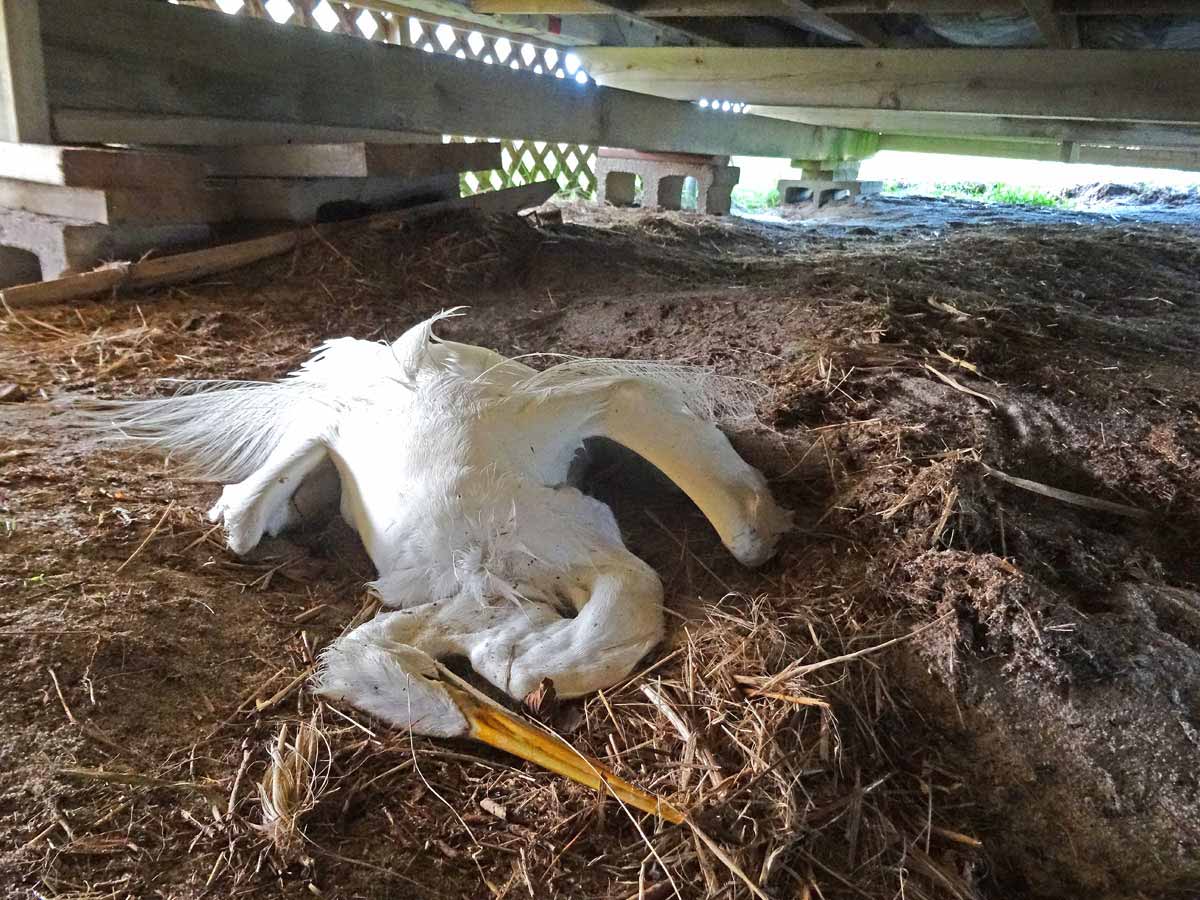 A Great Egret died in the crawl space under a building at the Sable Island Station, found in May 2018.

Six Great Blue Herons standing near Wallace Lake floodwater on the south beach, November 1, 2006. Seen from a long way off, there was a hint of menace in this scene until viewed through a telephoto lens. 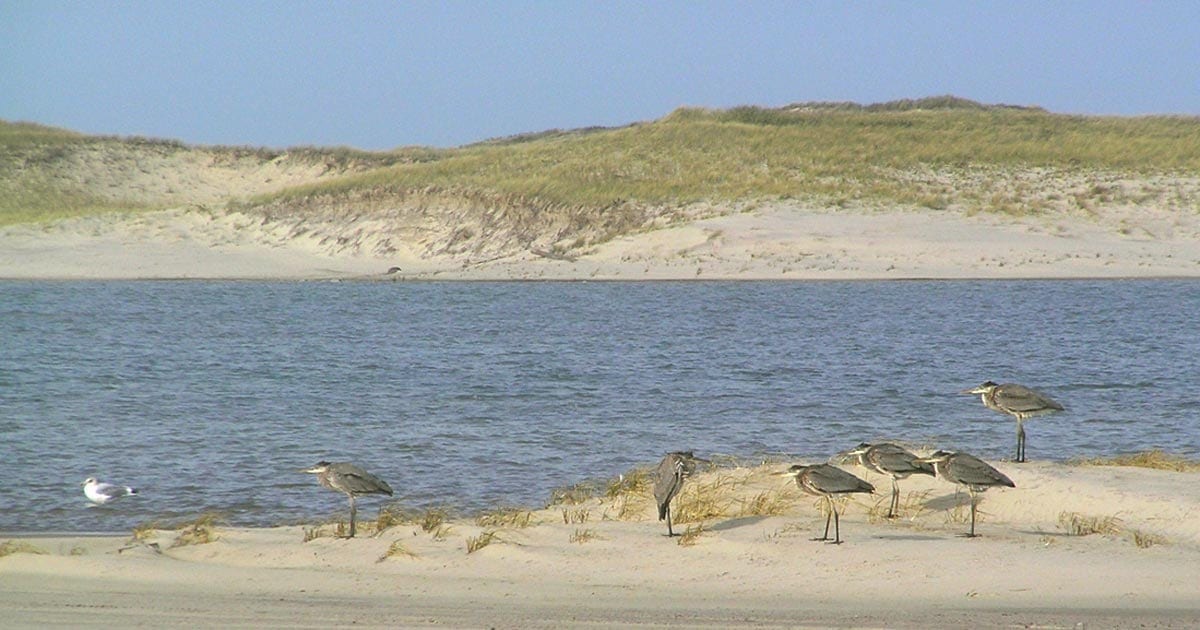 Same six herons a above. While they were standing facing into a stiff westerly wind sweeping across the open beach, a seventh Great Blue Heron was foraging in the West Ponds area. 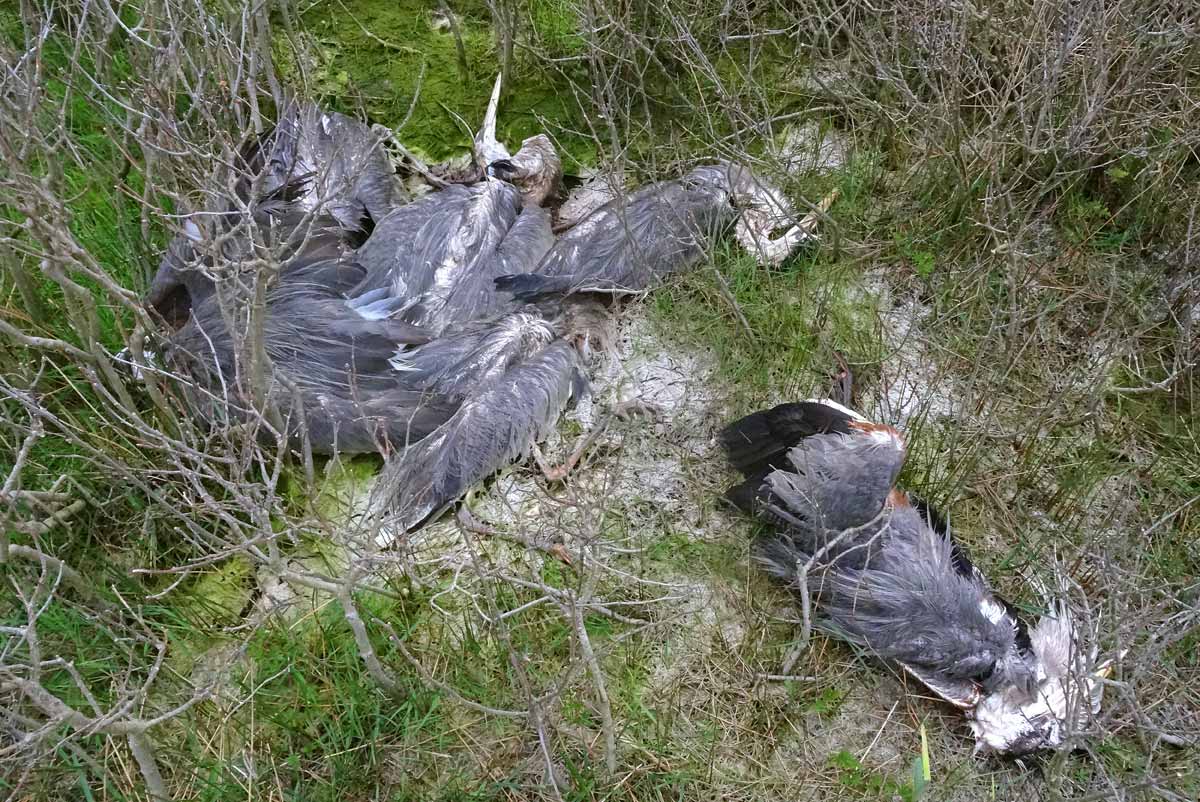 Corpses of six Great Blue Herons together in the middle of a leafless shrub thicket—six of the 15 individuals found in May 2018. The group must have been huddled where even a cluster of bare twigs provided a bit of a wind break. This area is near a large freshwater pond—Gull Pond—about 3 km east of the Sable Island Station. Seventeen of the 29 birds found in May were in the Gull Pond area.