Sand! When I was born, I opened my eyes to see sand. Lots of sand. When I mentioned this to Mum she nickered with laughter and told me I should get used to it. She then told me that we were on a bar of sand, in the middle of the vast ocean, called Sable Island. Well, she was right about the island being in the middle of the ocean. I could see water with lots of waves on one side of the island and on the other side; and, if I squinted my eyes, I could see water in front and behind.

The herd I was born into consisted of at least two dozen horses. Da, my sire, happened to be the lead stallion. He was also the biggest as he was almost 14 hands!! Our herd was led by Melony, the lead mare, who was a gentle dark chestnut.  My Mum’s mum and dad, Fanny and Old Ben, were in the herd as well. Old Ben was a very old stallion but he told great stories.

Da said he had explored the whole island and had seen the settlement the humans had made. This included a station they used to record the weather. Record weather? The weather here was often cloudy. Warm, comfortable, and cloudy in summer and spring. Cold, wet, and cloudy in the winter and fall. I decided not to point this out to Da.

One thing that the people here could record would be the songs we heard frequently. I didn’t know what caused them so I asked Fanny. Fanny said that it was the minerals in the sand rubbing together when we stood or walked on the sand. She also said that the sand wouldn’t sing when it was damp. I liked the sand because it was fun to roll in.

I wasn’t the only creature who enjoyed the sand.  These big, squishy and boulder-like creatures with flippers and fins enjoyed sunbathing on the sand as well…on our territory!! I asked Da why he didn’t try to chase them away but he just stated that I was to stay away from them because the bigger ones could get aggressive.

Da forbade me to set foot in the waters near the edges of the island or even go close without one of the mares watching me for fear I would be a meal to one of the sharks. Da said that there were eighteen species of shark out there and that they could kill a small foal like me with one snap of their teeth. I was small but not that small! Nevertheless, I listened to Da.

There were birds on the island as well. Terns and the Ipswich Sparrow were two common birds to see and boy were the terns feisty. They would dive-bomb anyone who went too close to their nests which I always happened to stumble upon.

I asked Old Ben how we came to be on this island. He said that one of the most reasonable theories that someone had come up with was that we were descendants of the Acadian people’s horses.

I thought it was a little silly because how would French horses end up at least 4000 km from France. Old Ben was very patient. He explained that our ancestors arrived by boats on the Nova Scotia mainland and then were sent to this island. Throughout the years, some horses were taken away to the mainland and sent away where rumors had it that maybe they ended up as dog food and glue. At this point, Mum ordered him not to tell me any more.

Da’s herd was very big and he had lots of other fillies and colts by other mares in the herd. I enjoyed playing with them and we had lots of fun. Unfortunately, a few weeks after I was born, Da disappeared and a dark brown stallion, named Thor, took the role of lead stallion. Old Ben told us (the foals) that because Da had lost to Thor, he wasn’t the leader anymore.

Thor was more aggressive than Da and he bullied everyone in the herd until they knew who was the boss. Those who didn’t were usually driven out or punished.  I stayed clear of him but I couldn’t avoid him after I was a yearling. I noticed that several other yearling colts had disappeared but Mum refused to tell me what was happening.

Thor appeared in front of me one morning. He started backing me up until I realized he was trying to drive me away from the herd!! I whinnied for help but all the rest of the herd continued grazing.  I put up a good fight but in the end I was chased off.

After that, I joined a bachelor band which is a small herd of colts who live together after being chased off. During my years with them, I learnt how to fight and discovered new things. Once, I saw a ship’s hull with writing that spelled out The Gale. Old Ben once told me that he saw a part of The Gale and had said that there were over 350 shipwrecks around the island. He also said that they don’t call Sable Island “The Graveyard of the Atlantic” for nothing.

I left the bachelor band and challenged a stallion for his herd. It was Thor. He didn’t recognize me but I recognized him and I defeated him. I am now the leader of my own herd and I have my own foals. Old Ben, Da, and Melony are gone but Mum is still here as the oldest horse in this herd. I have my own lead mare who was a filly when I was a colt with this herd.

Sable Island remains the same as I have always known it and it is my home.

Quleanja Laureijs’s drawing of the Sable Island horse in her story “Sable Island – My Home!“ 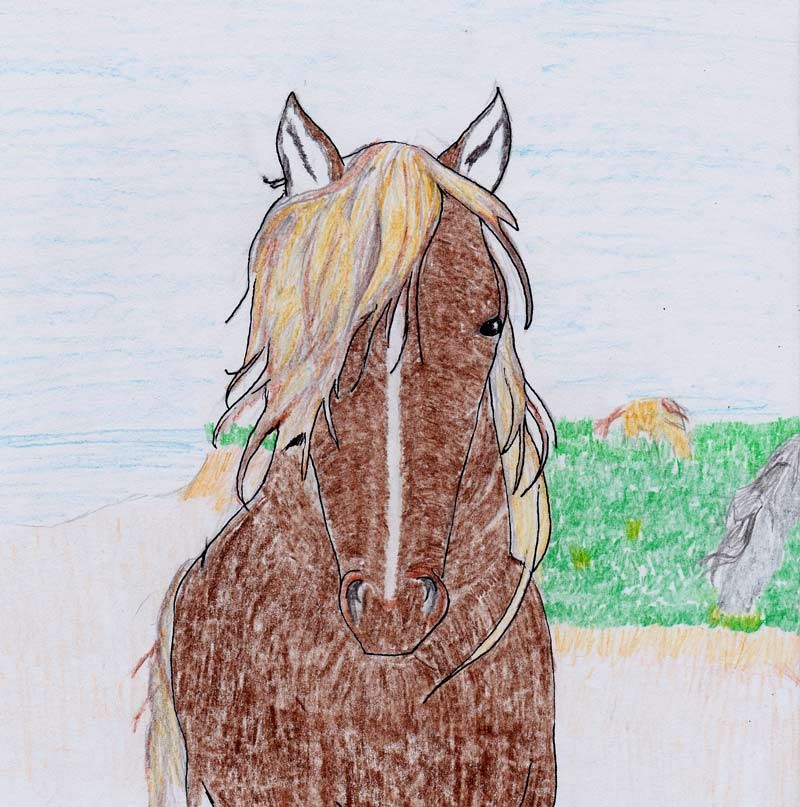