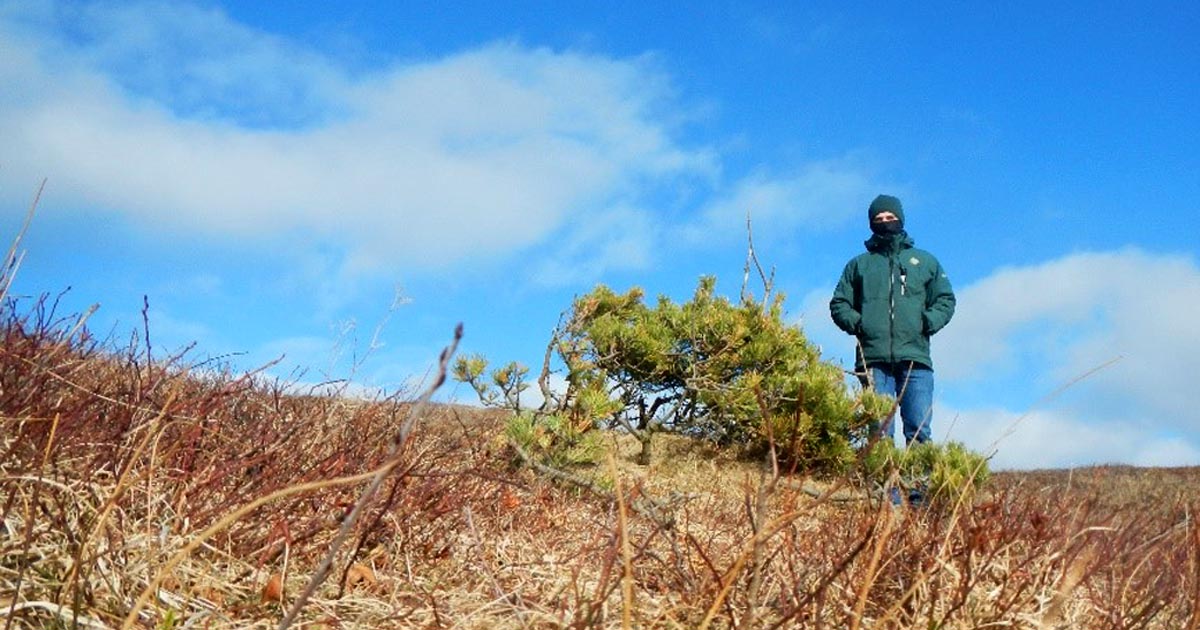 Image above: Me on a warm(ish) winter day doing a selfie with “the tree”.

I have to admit, growing up on Vancouver Island in British Columbia, I had never heard of Sable Island. I know, I know, this is troubling to all those in Atlantic Canada. In spite of this, I feel like deep down, right from the start, I was crafting my life experiences, my academic background, and my general interests to end up in a place like Sable. After all, who decides to study coastal dune geomorphology, then hikes to remote beach-dune systems in their spare time?

Then, about five years ago, when a job call came out asking for someone with emergency response experience, an education in the natural sciences, is comfortable in isolation, has experience with heavy machinery, is fun with strangers (hmm… I’m pretty sure that was in the job requirements…), I thought: wow, I think this is made for me! And it’s on an island entirely consisting of dunes???? My personal Shangri-La!

I have been very fortunate to count myself among some of the folks who have worked in operations on Sable Island for Parks Canada. All said and done, I was lucky enough to spend a full year of my life on Sable, including all the seasons. I got to see the wildlife, experience the storms, feast on the quiet, enjoy my fellow islanders, and revel in that true unbridled happiness that only comes from welcoming someone stepping off that airplane into a place they have wanted to get to their whole lives. I got to experience the latter countless times, welcoming visitors to the island, and it never, ever, got old. 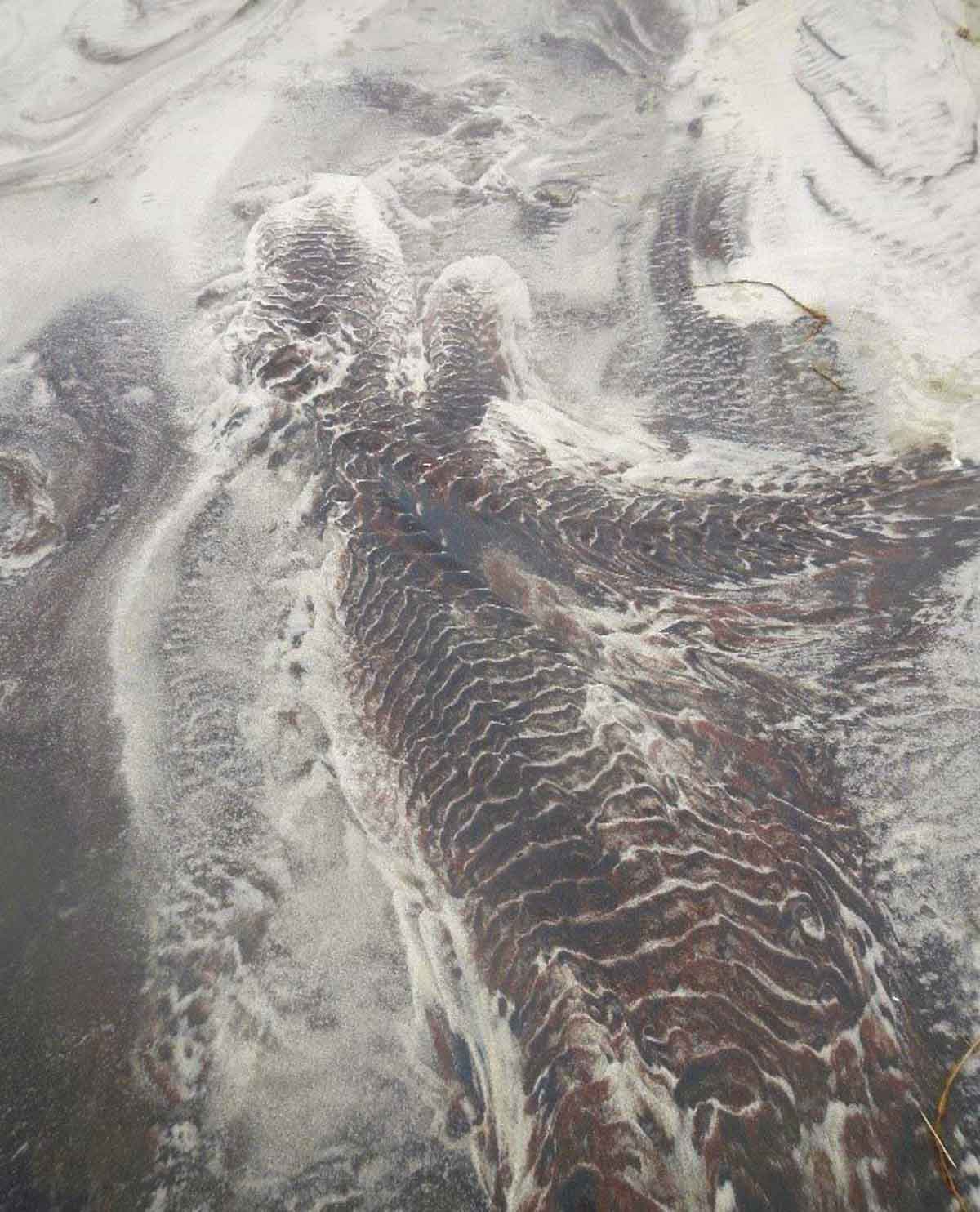 After berm overwash (brief flooding behind the beach), water flowing over the sand before soaking in would produce flow-like features with ripples. This one looked particularly like a glacier in the Rockies to me! 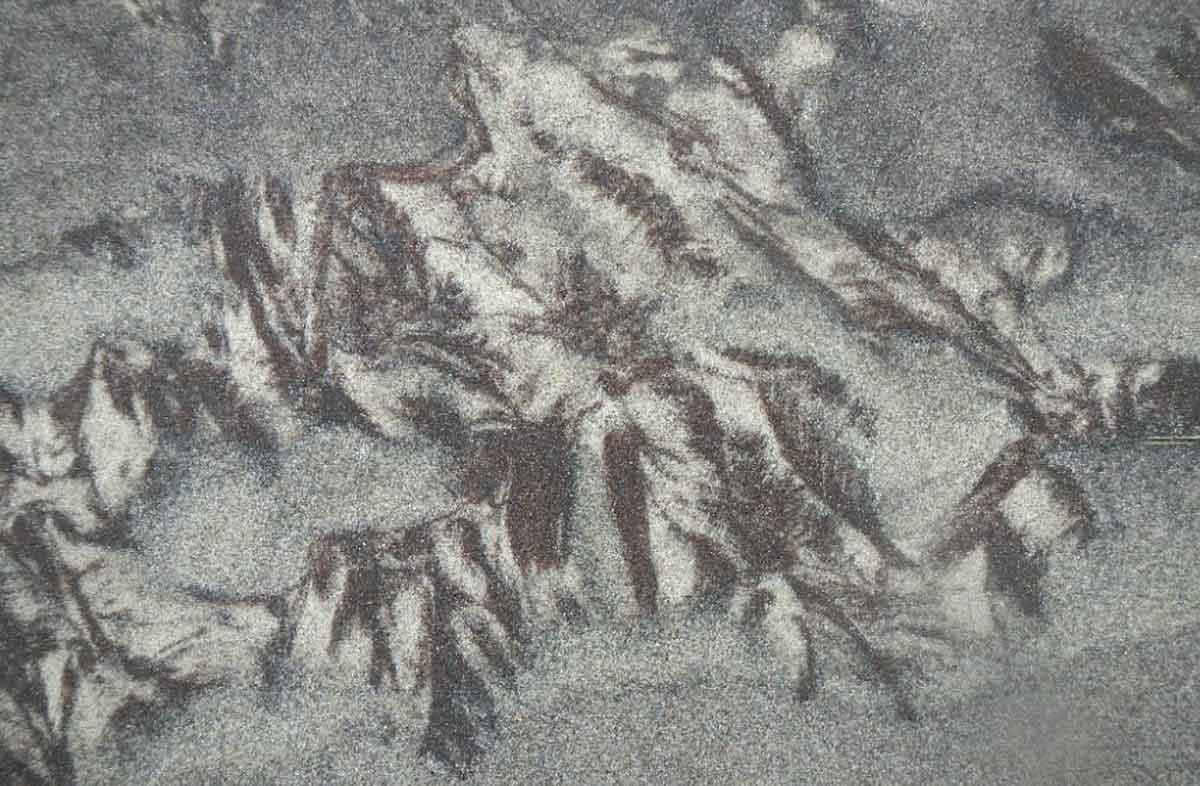 Squint hard enough, and you can almost see ferns or some sort of conifer branches in this one. The different minerals in the sands (and sometimes organic acids from vegetation) create some wonderful colour contrasts in the sand.

Being on an island entirely consisting of sand in the middle of the Northwest Atlantic, sometimes going weeks (or months) without seeing new faces (or new food), you end up trying to find some familiarity in the landscape. Being someone into sand and dunes, I was always interested in the wild and weird ways sand would shape, and be shaped by, the landscape. So, I thought I’d share some of the interesting analogies I came up with while roaming the dunes of Sable, as well as some just plain interesting “sand-scapes”. 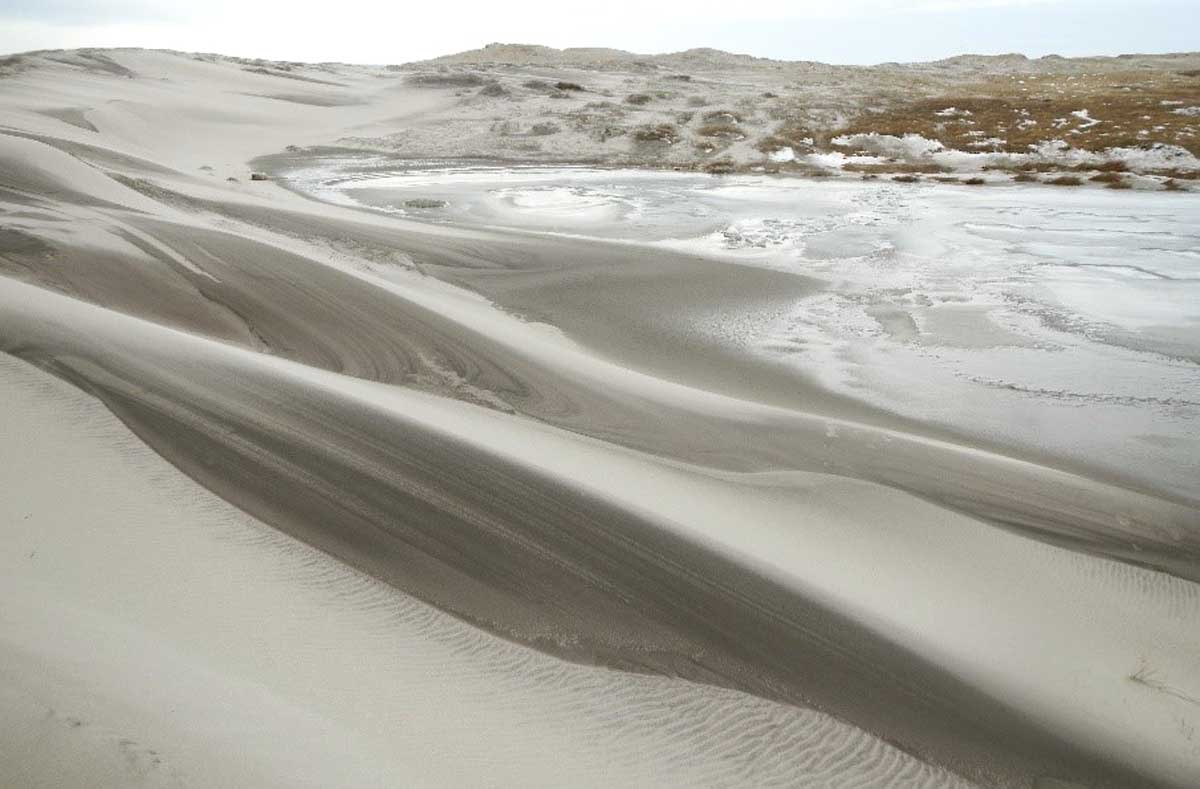 Winter at one of the ponds – subtle changes in wind speed over these rolling dunes results in “wave” patterns of erosion and deposition… with beautiful results. 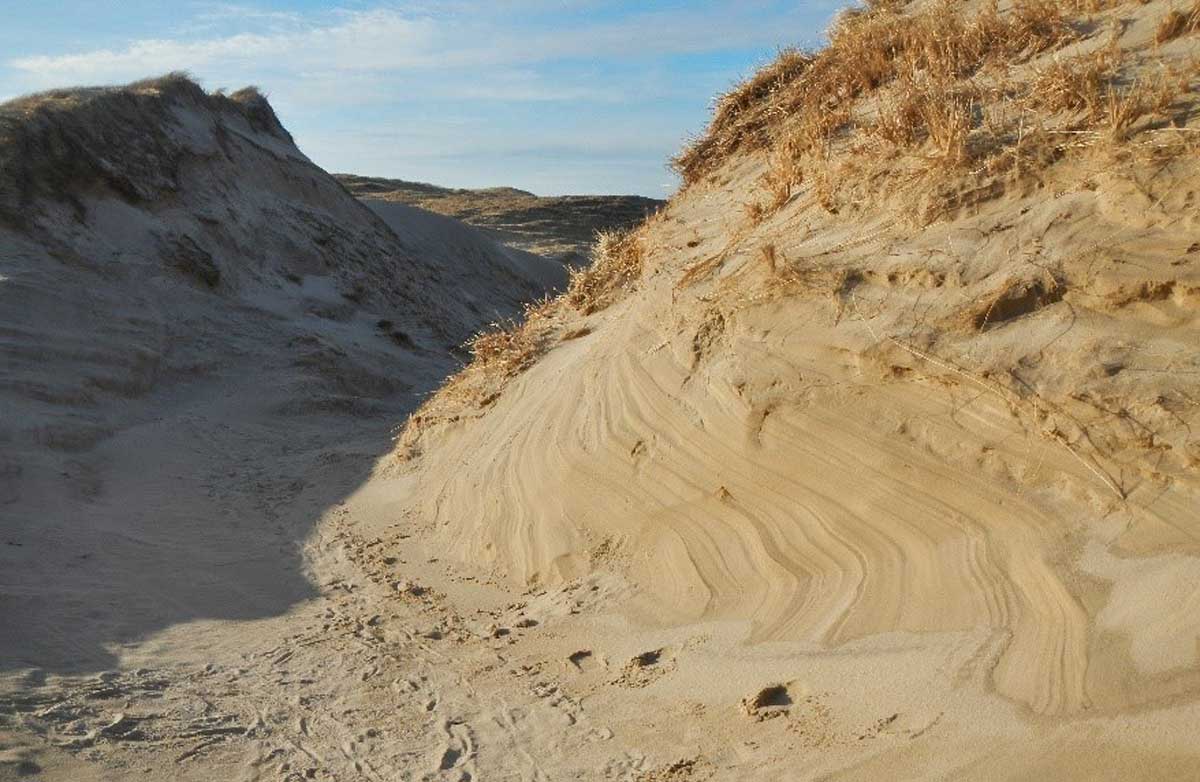 This one was all windblown erosion at the landward end of a blowout – reminded me of “the wave” geologic formation in Arizona. Maybe in 160 million years it will be the “the wave – North!” 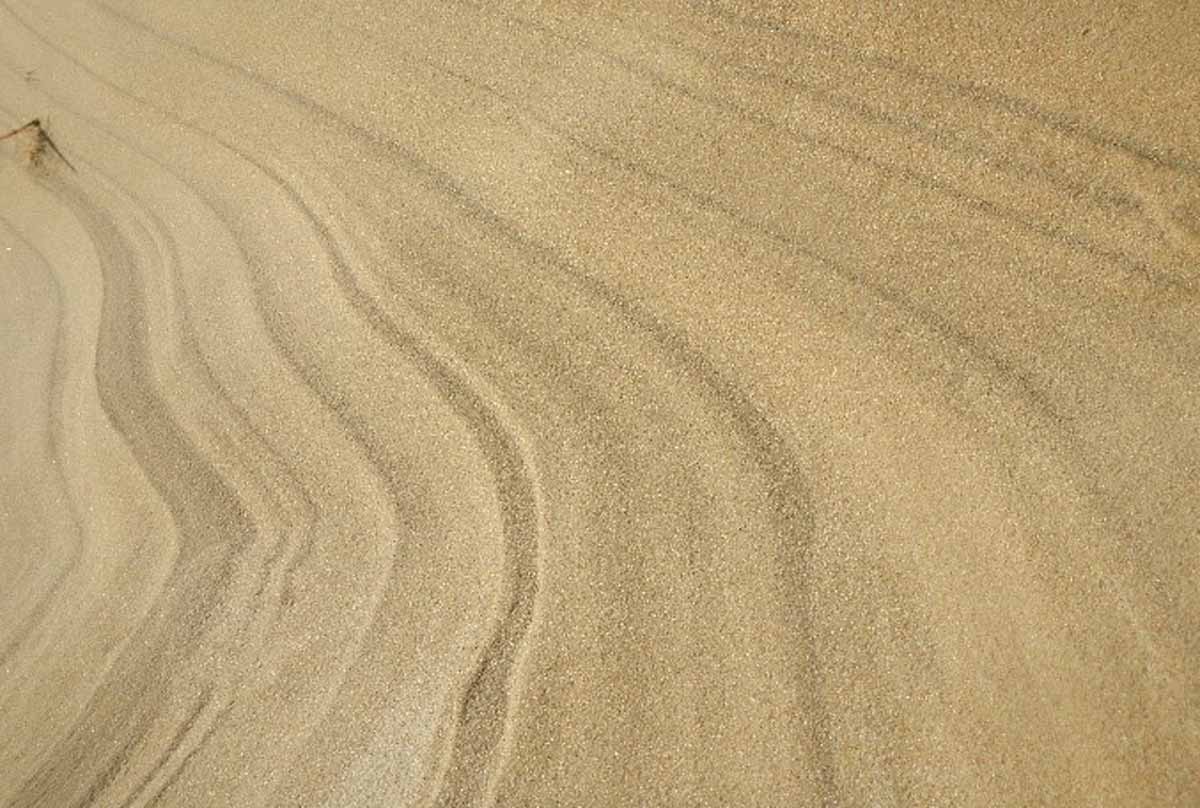 A close up of details in the previous photo. 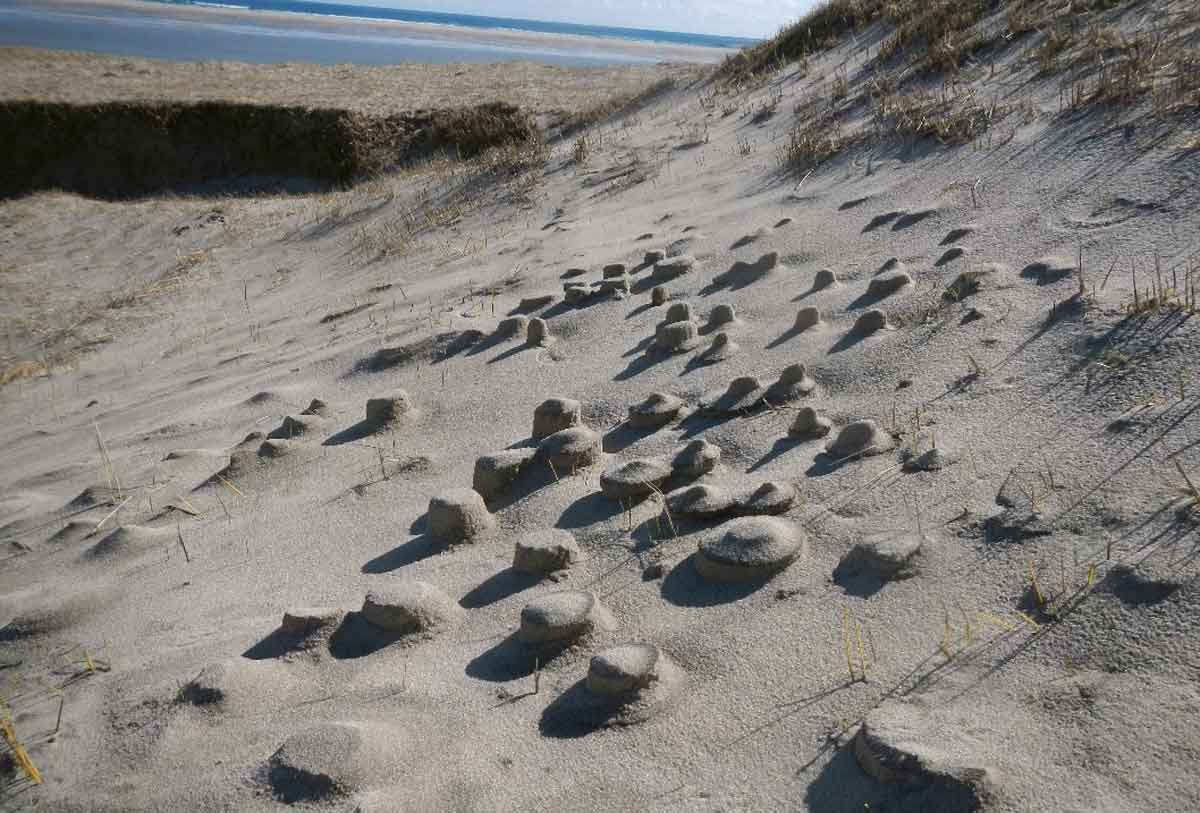 I know what you’re thinking – horse poo. But no, these are sand forms, commonly known on Sable as “sand muffins”. Very minor changes in mineralogy or even how the grains are sorted can allow some spots to retain water while others don’t – making them more susceptible to windblown erosion. 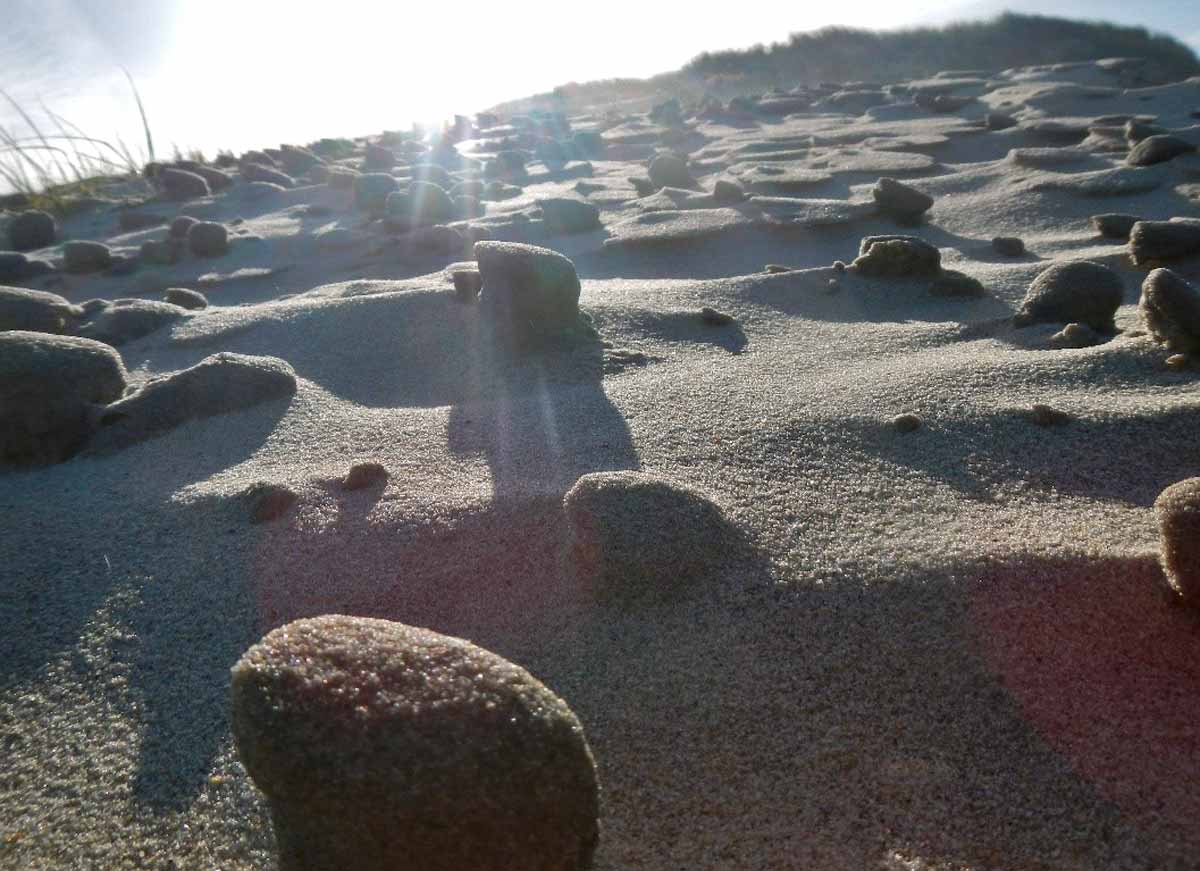 And these are horse poo – sand-encrusted and glittering balls of horse poo!

I included this one (more horse poo) because it’s often hard to appreciate from photos just how much sand is in the air when the wind is really blowing. 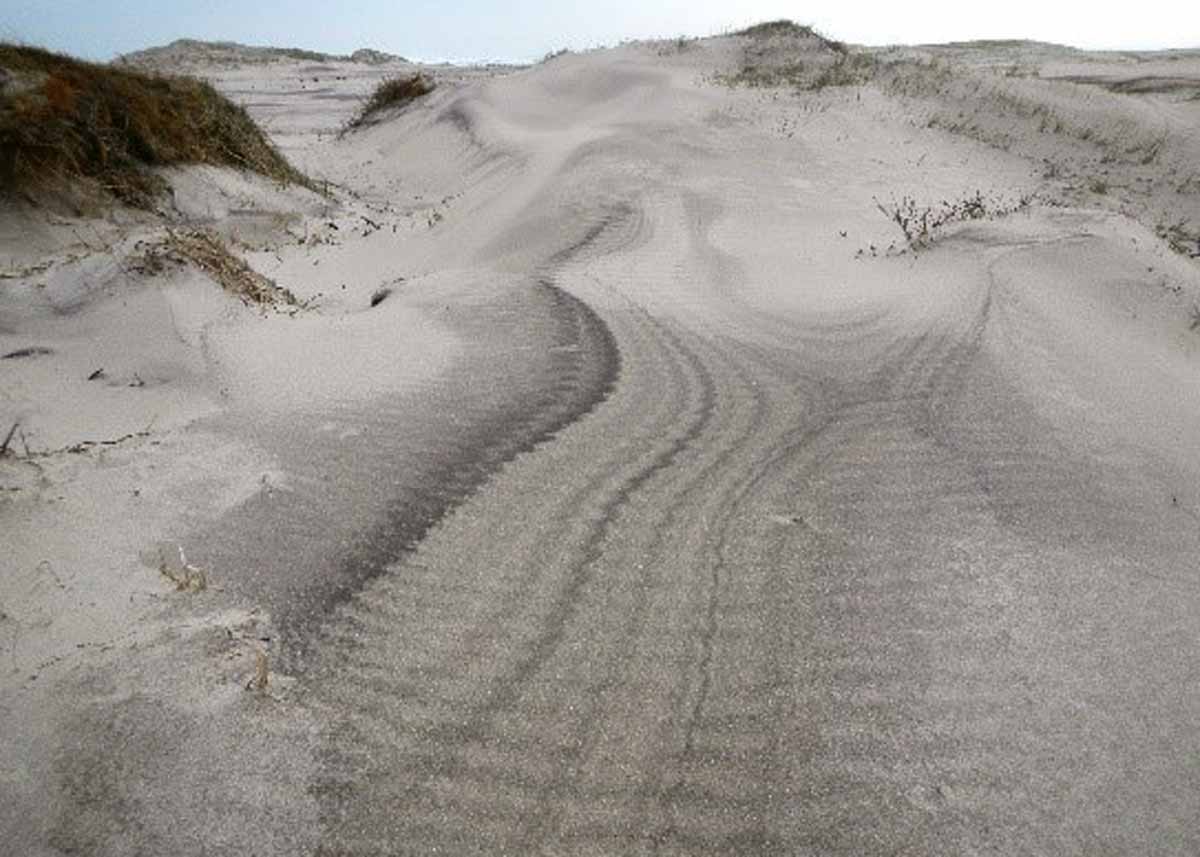 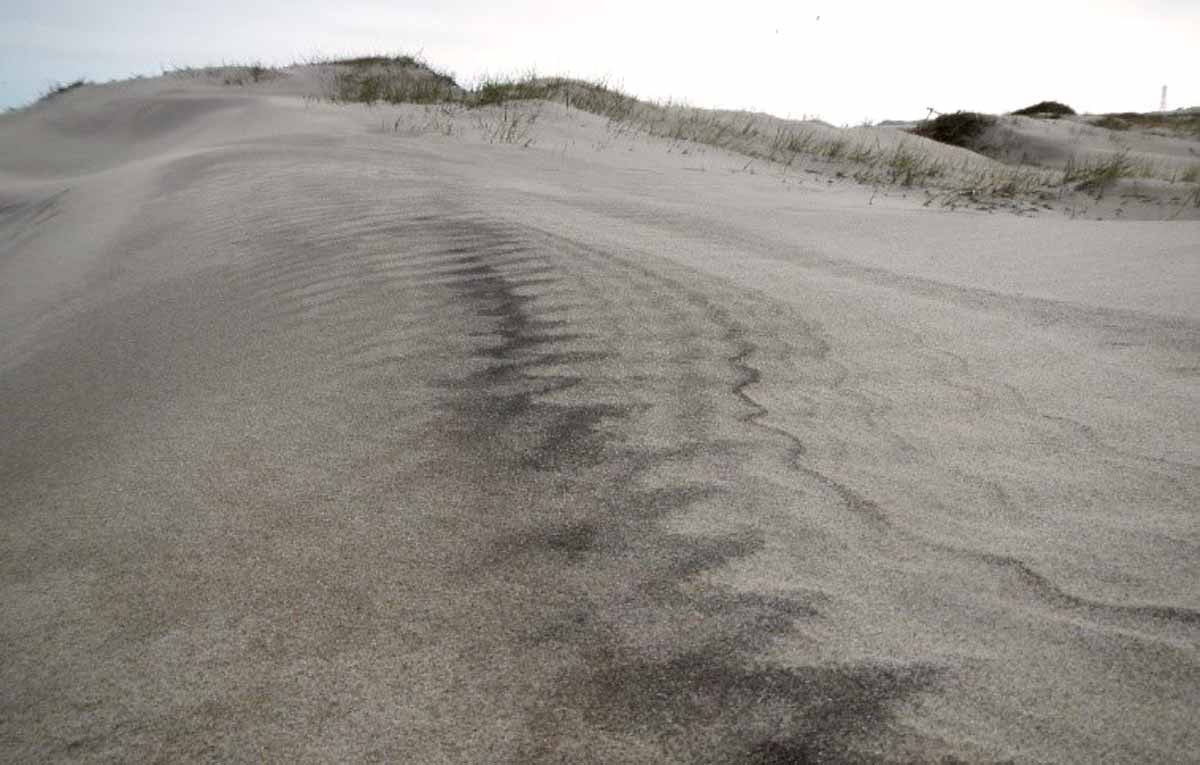 I like these patterns – windblown ripples formed right on some ever-so-slightly tilted and eroded beds of different coloured sands. Gives you the impression that something has gone wrong with your screen, or your eyes! 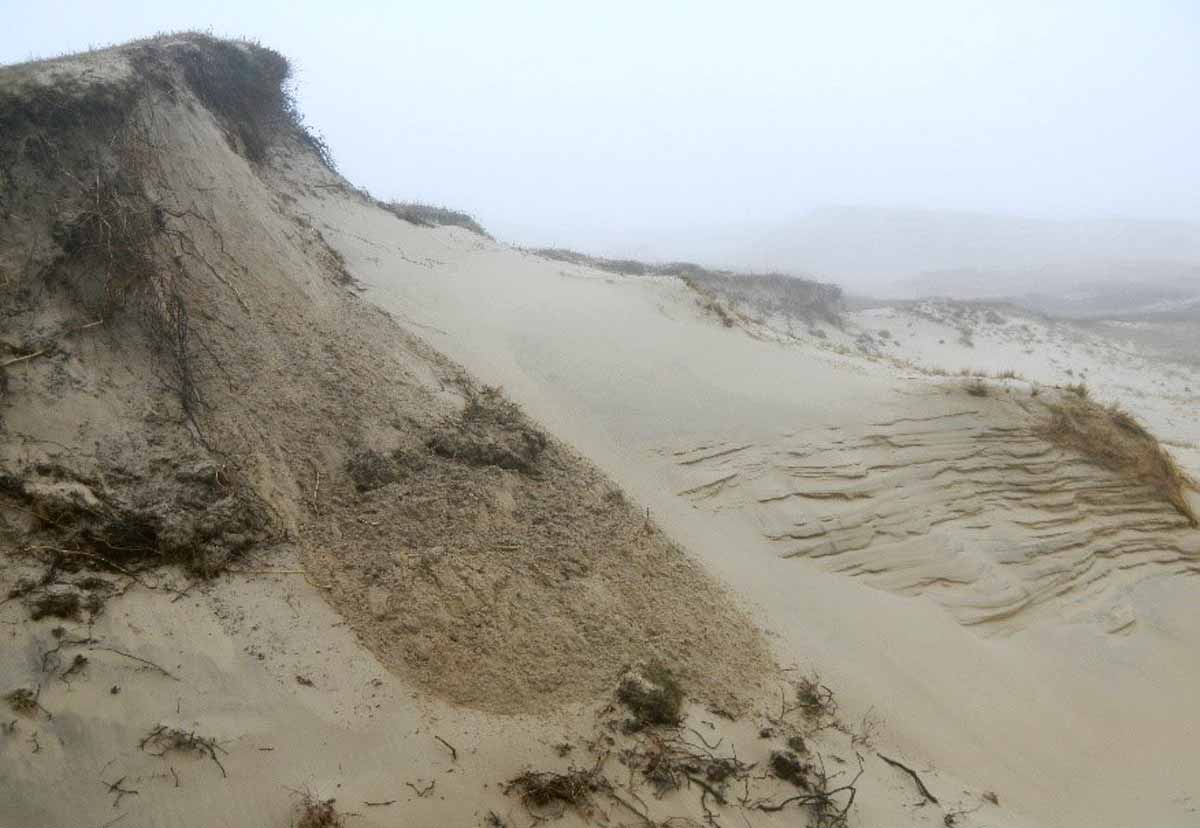 “Landslides” on Sable. Usually a few metres of run out… but you should probably mind the steep slopes after a heavy rain! 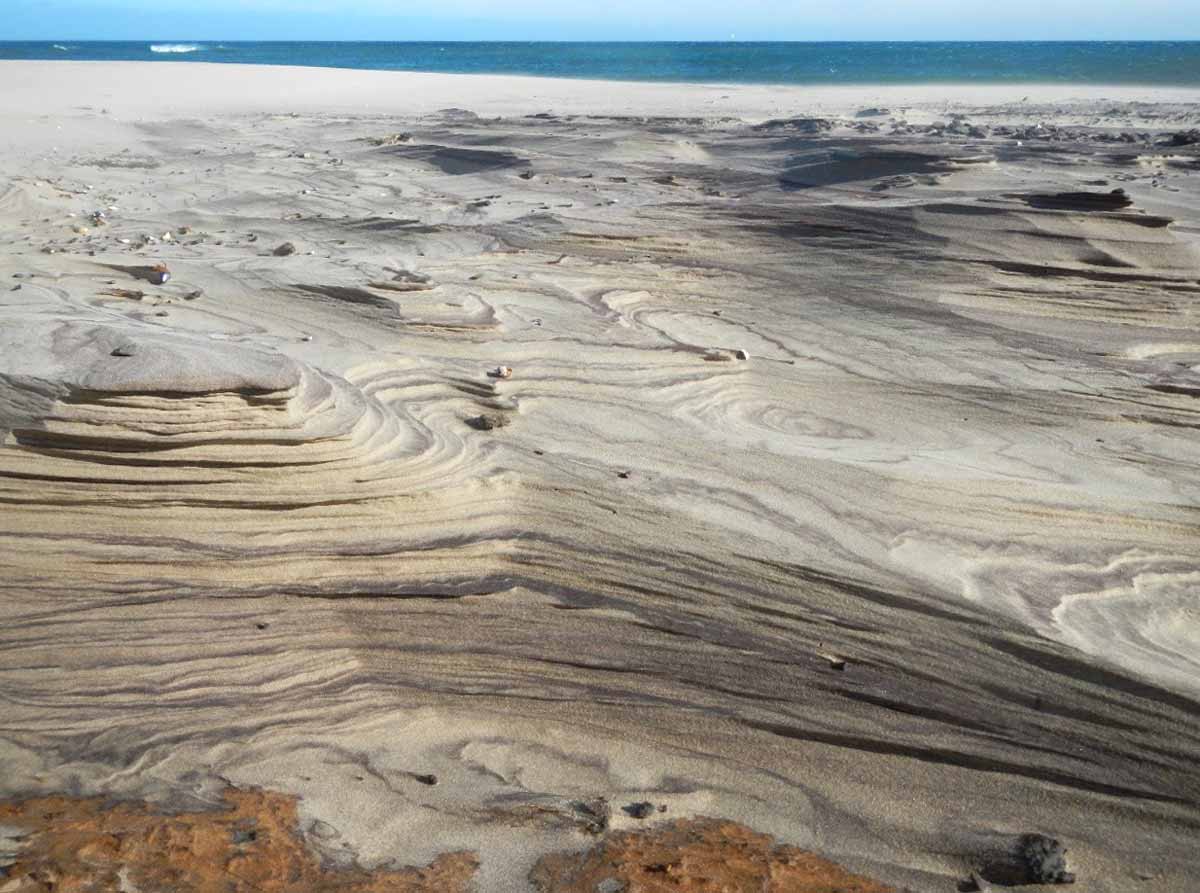 This one reminded me of a real-life topographic map. With no perspective this could be the Grand Canyon. This formed in the lee (downwind) side of a headland, where the winds were accelerated and had no sand to deposit – extreme erosion!

On the same day, where winds scraped surfaces clean and you were left with some amazing patterns. Notice that these are similar sands to what we saw above (the “glacier”), but before the patterns were created by one event of active deposition, whereas these are exhumed in such a way that the patterns actually reflect a number of different events. 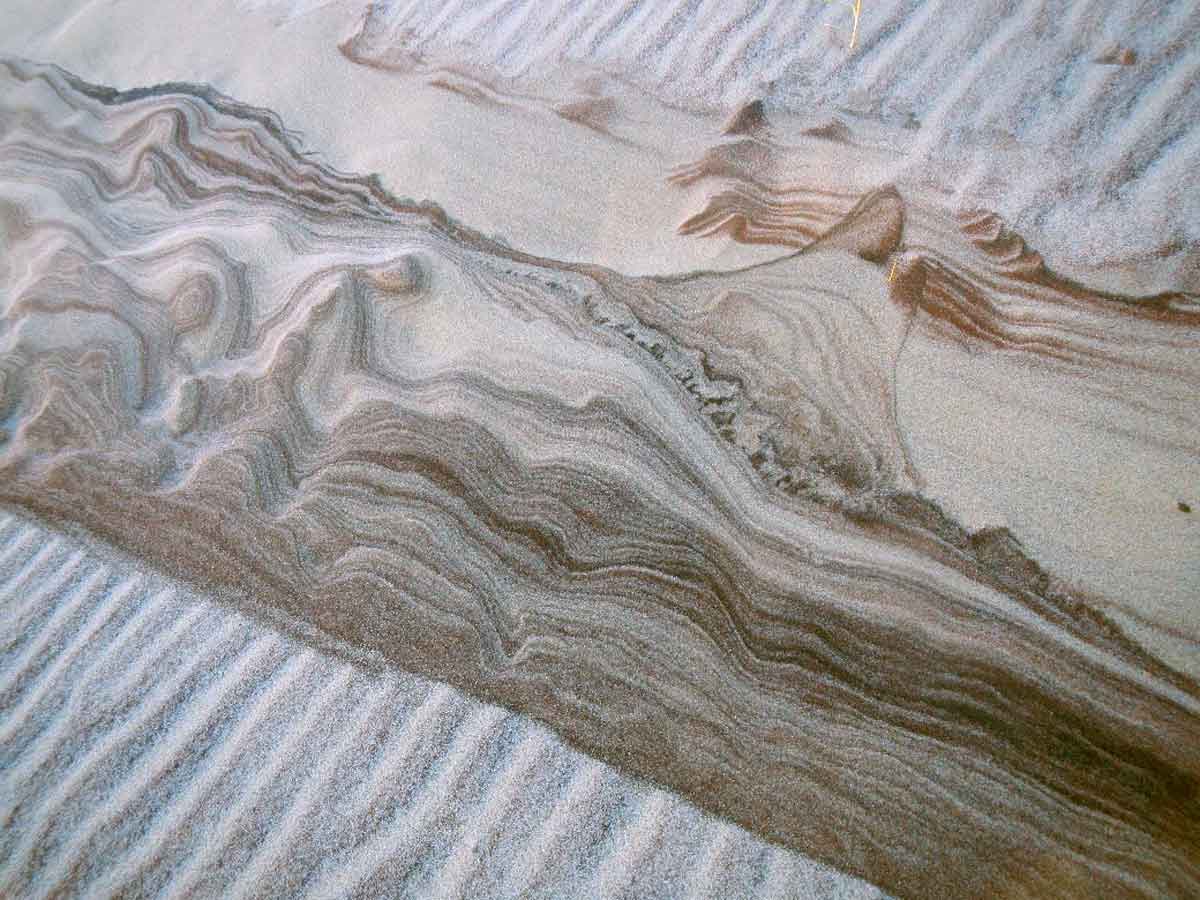 I like to think that geologists have to tell a story with what they see to make sense of the sequence of events leading to an observation. What story does this tell you? 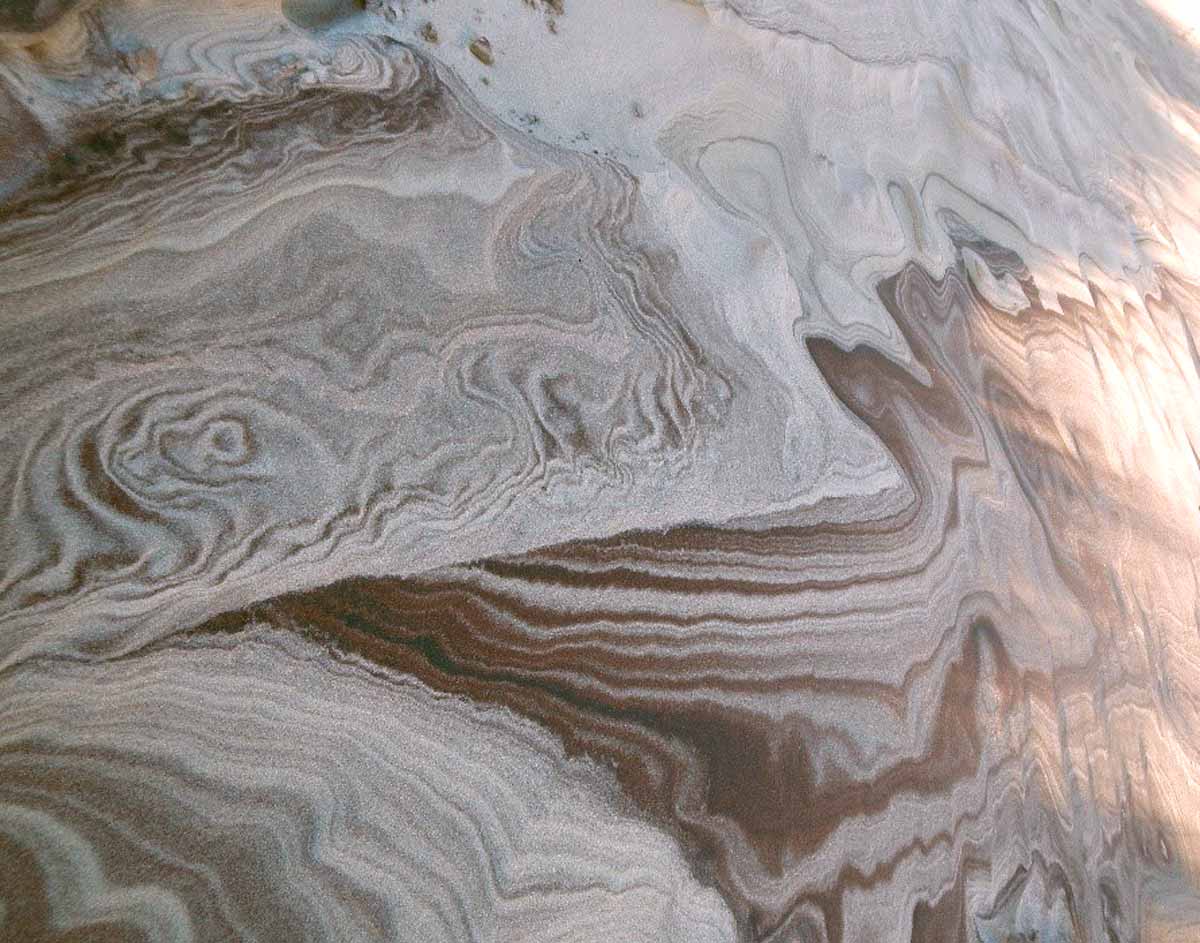 What about this one?

Sometimes you see things that look very normal but are anything but. This “river mouth” only lasted for about 5 seconds at a time, between waves washing over the berm and draining at the outlet. 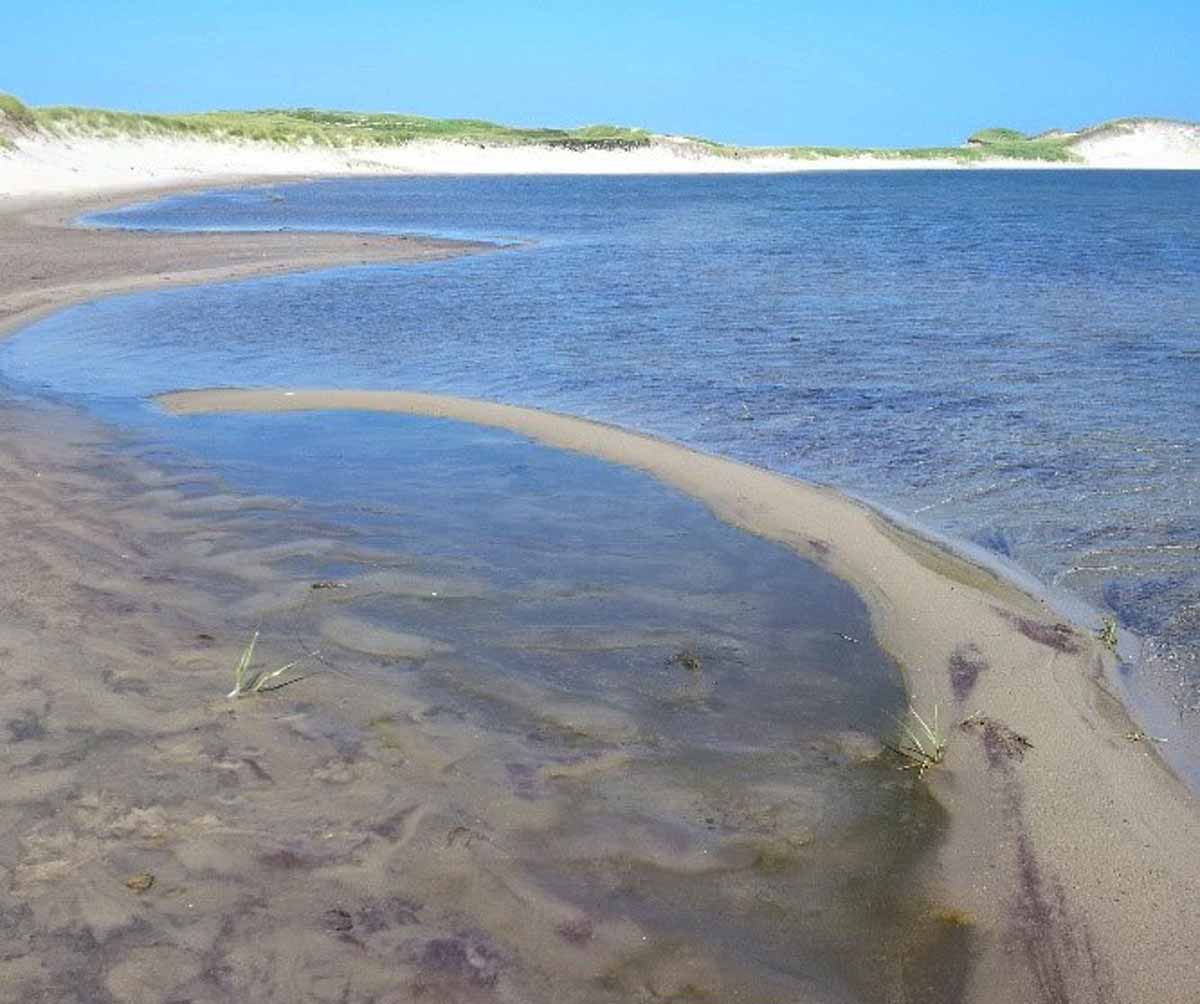 You could find beautiful spits in the flooded beach, complete with back-barrier “lagoon”, which would form and meet their demise every time the wind shifted. Even so, the forces at play and morphology are all identical to what forms Cape Cod or Sandhills Provincial Park NS, just at a far smaller scale! 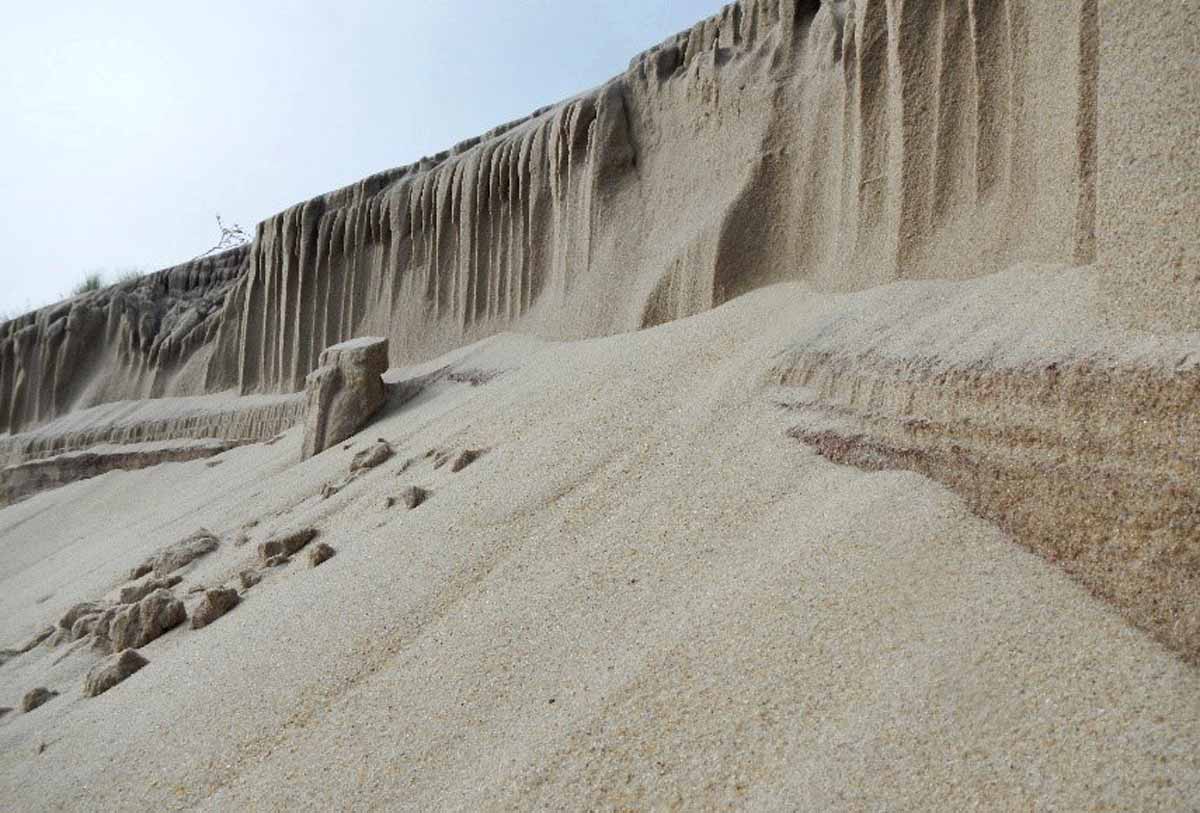 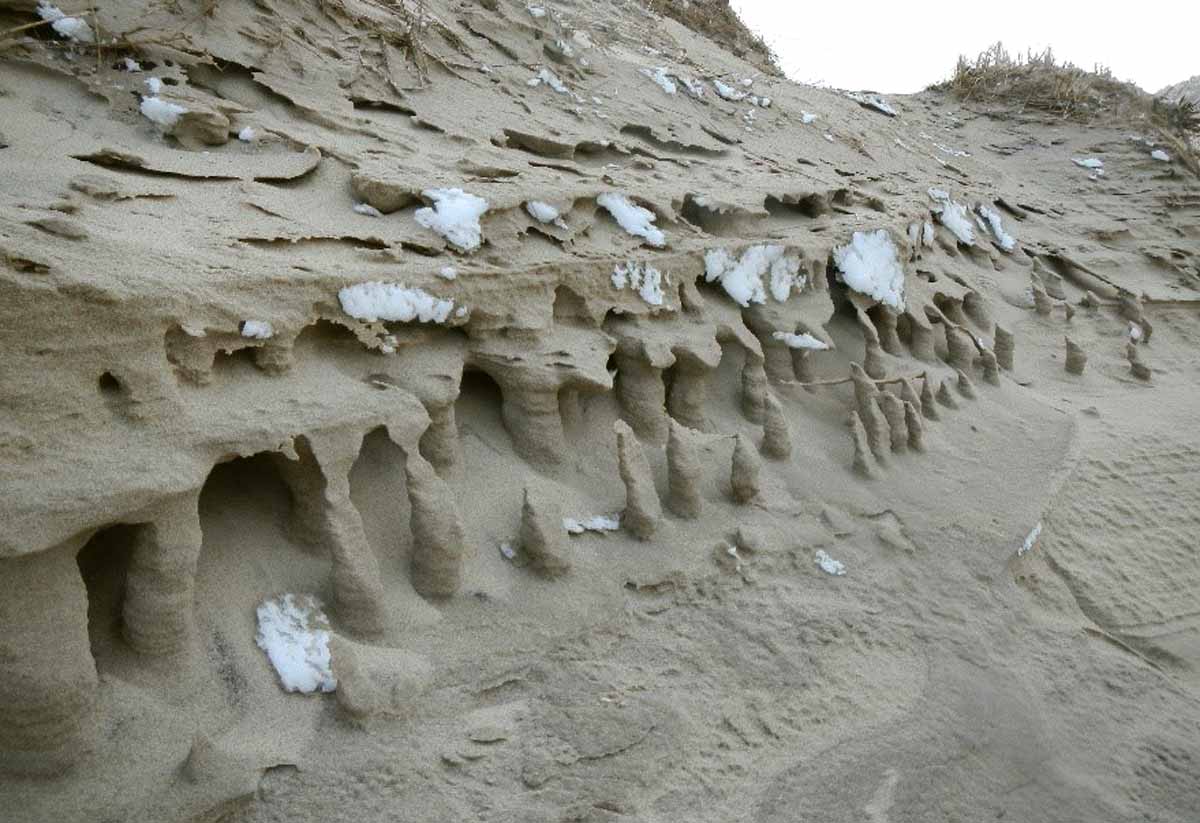 These shapes can be found in the winter, and I think they form in a similar way to the “sand muffins” above. However due to the colder temperatures the water in the sands was frozen and what was left after wind erosion are shapes that are altogether beautiful and strange to behold. They reminded me of hoodoos or maybe even stalagmites (or columns, depending on where you look!).” 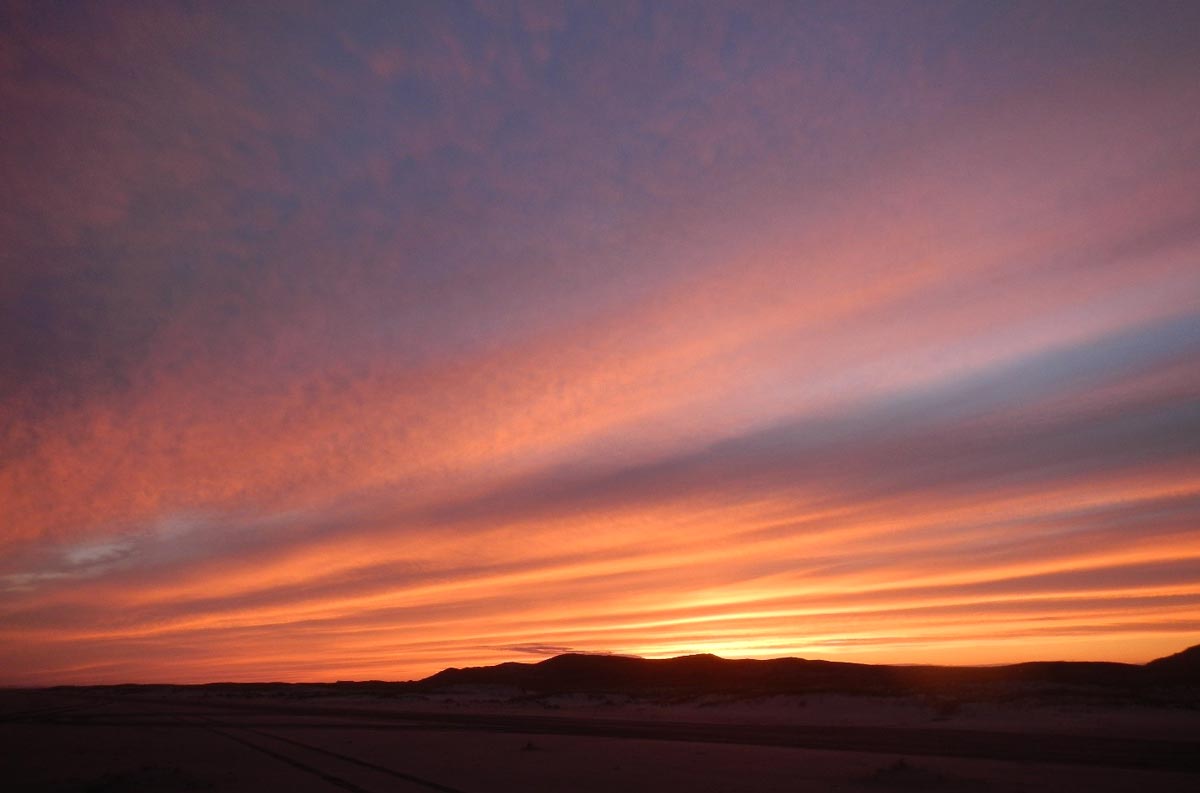 One of the last sunsets I saw on the island… and it truly was one of the best I personally experienced.

What a privilege it was to spend all the time I did on the island, it was a once in a lifetime experience. To get paid to do something you love is really a gift. I really do cherish the opportunity to share my experiences (even if they are a little different and ‘sand’ focused) and hope that more people get to experience the island that has been so special to so many.