Excerpt from The Birds of Sable Island, Nova Scotia, Ian A. McLaren, 1981.

“Beginning in 1894, there was a period of intense study of the island’s birds. This was occasioned in part by the visits of some well-known naturalists of the day, but most of the activity was by some children of Robert J. Bouteillier, the island’s Superintendent between 1884-1912. Bouteillier himself was a man of great vigor, intelligence, and organizational ability, of whose talents and hospitality have been widely written by visitors to the island during those days.

Some time after the discovery of the “Ipswich Sparrow” by Maynard (1872), and following upon some indications that it nested on Sable Island (Ridgway 1884; Merriam 1884), Jonathan Dwight, Jr., of New York City visited the island between 28 May and 14 June 1894 in order to study the bird on its nesting grounds (Dwight 1895). The visit by this well-known American ornithologist had a profound influence on the 3 youngest Bouteilliers: Sara Beatrice or “Trixie” (1879-1978), Richard S. or “Dick” (1881-1928) and James W. McL. or “Jim” (1885-1971). In a taped interview a few years before her death, Trixie Bouteillier describes how Dwight taught them to make bird skins and was able, after so many years, to refer to some of the island’s birds by the Latin names used in Dwight’s day. The boys (Fig 2) became especially serious, and James retained his interest through his later years at Sault Ste. Marie, Ontario (R. S. Bouteillier, in litt.).

An important result of Dwight’s visit was a series of bird skins from the island now in the American Museum of Natural History (AMNH) and the Science Museum, Springfield, Massachusetts (SMS). Some were taken by Dwight himself (90 catalogued in AMNH, 9 in SMS), but a larger number (177 in AMNH, 37 in SMS) are dated subsequently to his visit, and were clearly sent to him by the Bouteilliers; there is direct evidence of this on some labels. The earliest of these is a Lincoln’s Sparrow dated 30 June 1894, and the latest are 3 Whimbrels taken 6 September 1910.”

A section of page 6 in Ian McLaren’s Birds of Sable Island, Nova Scotia. This copy has been in use on the Island for about thirty years—its binding has worn away, and the pages are now held together with loops of red string (a tangle of which was found washed up on the beach). 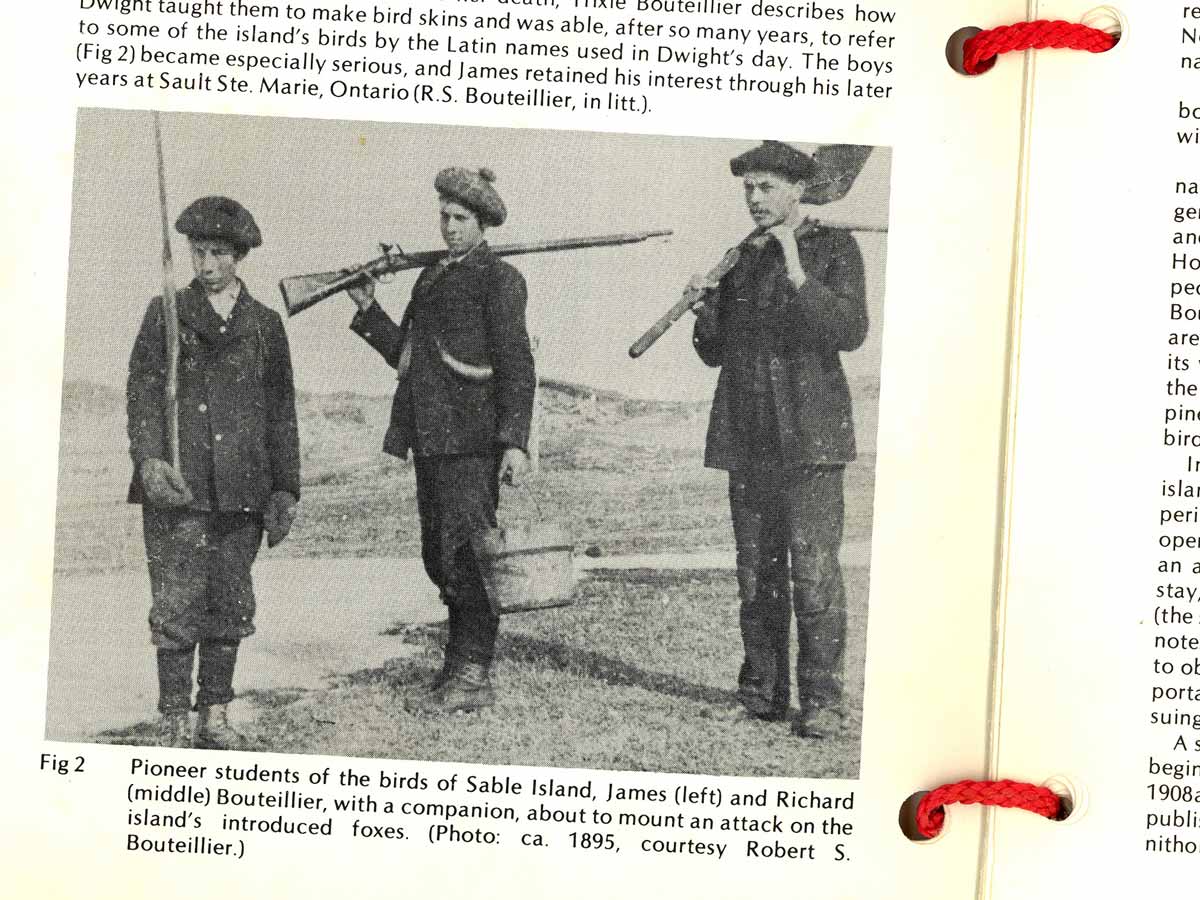 Literature Cited in the Excerpt: